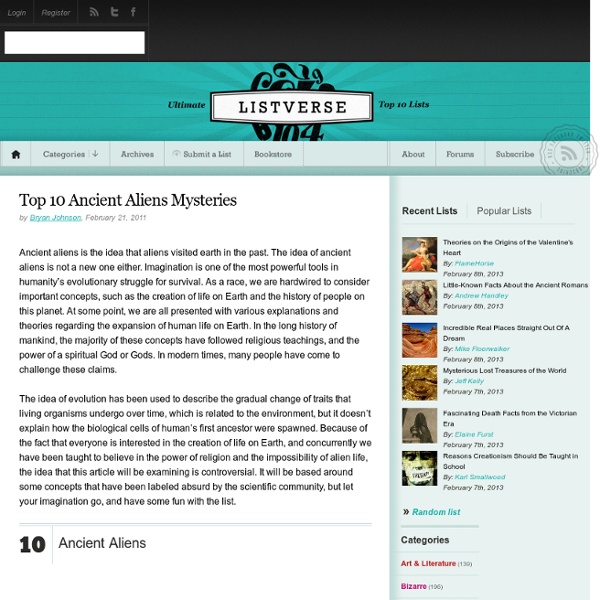 Mysteries Ancient aliens is the idea that aliens visited earth in the past. The idea of ancient aliens is not a new one either. The idea of evolution has been used to describe the gradual change of traits that living organisms undergo over time, which is related to the environment, but it doesn’t explain how the biological cells of human’s first ancestor were spawned. The idea surrounding ancient aliens is a basic one. This concept is related to the religious practice of a cargo cult, which can be seen in modern day pre-industrial tribal societies. It has been proposed that, with the current age of the universe and its vast number of stars, if the Earth was typical, extraterrestrial life should be common. The idea of ancient alien as astronauts has spawned a UFO religion named Raëlism. The Quran depicts a story of angels that are given minds of their own, found in verse [2:34]. Modern Technical Advancement Many of the accounts include unexplained lights, sounds and UFOs.

Ancient astronauts Ancient astronauts or ancient aliens[1] is a pseudo-scientific hypothesis that posits intelligent extraterrestrial beings have visited Earth and made contact with humans in antiquity and prehistory.[2] Proponents suggest that this contact influenced the development of human cultures, technologies, and religions. A common claim is that deities from most, if not all, religions are actually extraterrestrial in nature, and that such visitors' advanced technologies were wrongly understood by primitive men as evidence of divine status.[3][4] Proposers subscribing to the resultant paleocontact hypothesis proposal have popularized, particularly in the latter half of the 20th century, include Erich von Däniken, Giorgio A. Overview[edit] Proponents of the ancient astronaut hypotheses often maintain that humans are either descendants or creations of extraterrestrial beings who landed on Earth thousands of years ago. Ancient astronauts hypothesis of creation[edit] The genetic argument[edit] Robert K.

The Disclosure Project Dr. Steven Greer Bio | The Disclosure Project (Updated 12/15/11) Click Here for PDF version. Steven M. Greer, MD is Founder of The Disclosure Project, The Center for the Study of Extraterrestrial Intelligence (CSETI) and The Orion Project. Father of the Disclosure movement, he presided over the groundbreaking National Press Club Disclosure Event in May, 2001. A lifetime member of Alpha Omega Alpha, the nation's most prestigious medical honor society, Dr. He is the author of four insightful books and multiple DVDs on the UFO/ET subject. Dr.

Acoustic Levitation: Scientists Use Sound Make Objects Levitate Scientists have developed a sound generator so powerful its shock waves can stun, and even kill people. Another group of researchers have developed another unusual application for sound: a method of "acoustic levitation" that could help maintain colonies on Mars or the moon by using high-pitched sound waves to remove alien dust. Wired explains, Blasting a high-pitched noise from a tweeter into a pipe that focuses the sound waves can create enough pressure to lift troublesome alien dust off surfaces, according to a study published January in the Journal of the Acoustical Society of America. Extra-terrestrial missions have been plagued by dust and debris, which cling to rovers and astronauts because lunar and Martian environments lack the Earth's water or atmosphere that can displace the particles. According to Wired, See acoustic levitation for yourself in the video below!

Acoustic Levitation Of Stones Acoustic Levitation Of Stones by Bruce Cathie Monastery construction, Tibetan style according to Swedish Designer Henry Kjellson The steep mountain side is on the right. In the centre is the stone block, and on the left are the priests and musicians. Tibetan Monks levitate stones by using an acoustic levitation technique with the aid of drams in this 1939 sketch by Swedish aircraft designer Henry Kjellson. A New Zealand scientist recently gave me an intriguing extract from an article published in a German magazine, relating to a demonstration of levitation in Tibet. All the similar types of stories that I had read up until now were generally devoid of specific information necessary to prove the veracity of the account. The following report is based on observations which were made only 20 years ago in Tibet. A Swedish doctor, Dr Jarl, a friend of Kjelsons, studied at Oxford. Eight drums had a cross-section of one meter, and a length of one and one-half meters.

How Acoustic Levitation Works" Unless you travel into the vacuum of space, sound is all around you every day. But most of the time, you probably don't think of it as a physical presence. You hear sounds; you don't touch them. The idea that something so intangible can lift objects can seem unbelievable, but it's a real phenomenon. To understand how acoustic levitation works, you first need to know a little about gravity, air and sound. Second, air is a fluid that behaves essentially the same way liquids do. Third, sound is a vibration that travels through a medium, like a gas, a liquid or a solid object. The sound wave travels as the moving molecules push and pull the molecules around them. Click the arrow to move on to the next slide. Acoustic levitation uses sound traveling through a fluid -- usually a gas -- to balance the force of gravity. The process relies on of the properties of sound waves, especially intense sound waves.

Acoustic levitation Acoustic levitation (also: Acoustophoresis) is a method for suspending matter in a medium by using acoustic radiation pressure from intense sound waves in the medium. Acoustic levitation is possible because of the non-linear effects of intense sound waves.[1] Some methods can levitate objects without creating sound heard by the human ear such as the one demonstrated at Otsuka Lab,[2] while others produce some audible sound. There are many ways of creating this effect, from creating a wave underneath the object and reflecting it back to its source, to using an acrylic glass tank to create a large acoustic field. Acoustic levitation is usually used for containerless processing which has become more important of late due to the small size and resistance of microchips and other such things in industry. See also[edit] References[edit] External links[edit]

Giorgio A. Tsoukalos Giorgio on Facebook! Follow Giorgio on Twitter! Gold Flyer Pin as worn by Giorgio! Get your own right here. Giorgio A. Tsoukalos is the star and Consulting Producer of ANCIENT ALIENS - THE SERIES (2010-2012) and publisher of Legendary Times Magazine, the only Ancient Astronaut publication in the world. For over 14 years, Giorgio A. As the world's leading Ancient Astronaut expert, Giorgio has starred in and appeared on The History Channel, the Travel Channel, the National Geographic Channel, the Sci-Fi Channel, Coast to Coast AM, and many other international television and radio programs such as UFO HUNTERS and ANCIENT ALIENS reporting about the latest discoveries in the Ancient Astronaut field. In 2010, Tsoukalos starred in and was the Consulting Producer for The History Channel's wildly successful ANCIENT ALIENS: THE SERIES which was produced by Prometheus Entertainment. Tsoukalos has traveled the world extensively (54 countries ...and counting). The A.A.S. Giorgio A. Giorgio A.

Legendary Times - Come Search with Us