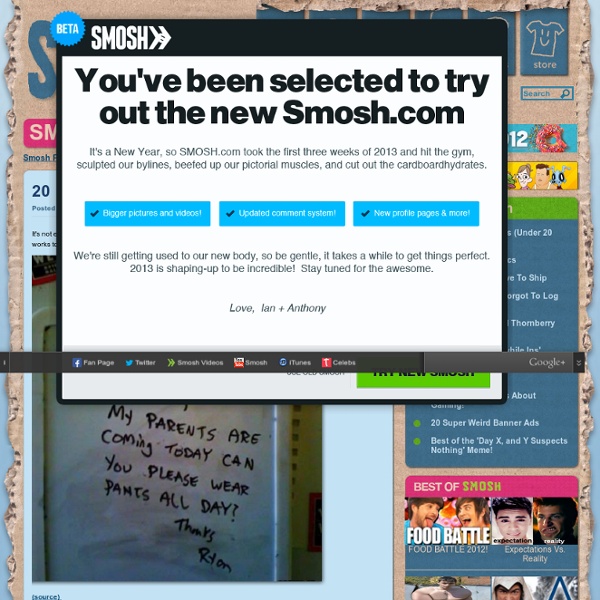 Oh, So That's What That Really Means (13 Pics) - StumbleUpon November 7, 2011 | 44 Comments » | Topics: LOL, Pics (via) Hot Stories From Around The Web Other Awesome Stories 50 Ways To Boost Your Brain Power 1) Meditate — Meditation has been known to increase IQ, relieve stress, and promotes higher levels of brain functioning. Meditation also activates the “prefrontal cortex” of the brain, an area responsible for advanced thinking ability and performance. 2) Draw A Picture — Drawing stimulates the right-hemisphere of the brain and inspires creativity. Get out the colored pencils and begin drawing your way to a powerful brain.

Fall Window Art: Leaf Suncatchers + Free Printable Template And when the light catches them just right they seriously just g-l-o-w. It's gorgeous! This post contains affiliate links for your convenience. Water is dangerous This was found on the newsgroup: rec.humor.funny A student at Eagle Rock Junior High won first prize at the Greater Idaho Falls Science Fair, April 26. He was attempting to show how conditioned we have become to alarmists practicing junk science and spreading fear of everything in our environment. In his project he urged people to sign a petition demanding strict control or total elimination of the chemical "dihydrogen monoxide." And for plenty of good reasons, since:

10 Golden Lessons from Albert Einstein - Global One TV Every day I remind myself that my inner and outer life are based on the labors of other men, living and dead, and that I must exert myself in order to give in the same measure as I have received and am still receiving - Albert Einstein Albert Einstein was an amazing physicist. He figured out so many universal principles and equations that he was way ahead of his fellow scientists at any point of time. But he is also remembered for another thing; a quality which made people call him a genius: his words.

Ten Video Games Viewed From a Different Perspective (click to enlarge) This text art project was inspired by a recent reddit thread that examined how games might look from a different perspective. It was based around this image, and though I found this Skyrim idea in the comments as a follow up, I thought there was much more to be explored with the concept. 16 Things I Wish They Had Taught Me in School I am 28 now. I don’t think about the past or regret things much these days. But sometimes I wish that I had known some of things I have learned over the last few years a bit earlier. That perhaps there had been a self-improvement class in school. And in some ways there probably was. Locker Design Ideas Board by piccry.com Good Ideas to Put in Your Locker Birthday Locker Decorating Ideas Good Locker Decorating Ideas School Locker Decoration Ideas

45 Quotes on Dreams - StumbleUpon By Stephanie Sarkis, Ph.D. Learn about the power of your dreams ... I don't dream at night, I dream all day; I dream for a living. - Steven Spielberg 7 Lessons From 7 Great Minds - Global One TV - StumbleUpon Have you ever wished you could go back in time and have a conversation with one of the greatest minds in history? Well, you can’t sorry, they’re dead. Unless of course you’re clairaudient, be my guest. But for the rest of us, we can still refer to the words they left behind. Even though these great teachers have passed on, their words still live, and in them their wisdom. I’ve made a list of seven what I believe are some of the greatest teachings by the world’s greatest minds.