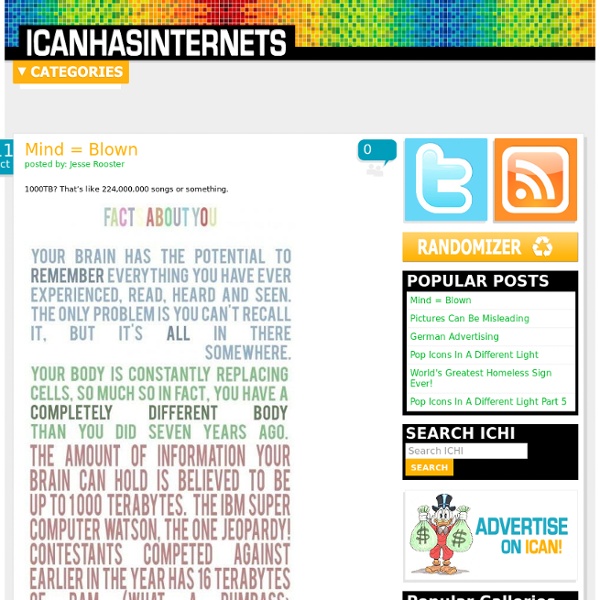 5 Ways 'Common Sense' Lies To You Everyday The Regression Fallacy You'll Hear it As: "If this cock ring isn't lucky, then how come I got that new job when I was wearing it?" How It Screws Us: Reverse Brainstorming - Brainstorming techniques from MindTools A Different Approach to Brainstorming © iStockphoto/Diva_Nir4a Reverse brainstorming helps you solve problems by combining brainstorming and reversal techniques. By combining these, you can extend your use of brainstorming to draw out even more creative ideas. To use this technique, you start with one of two "reverse" questions:

What You'll Wish You'd Known January 2005 (I wrote this talk for a high school. I never actually gave it, because the school authorities vetoed the plan to invite me.) When I said I was speaking at a high school, my friends were curious. Why I Will Never Have a Girlfriend - nothingisreal.com Tristan Miller German Research Center for Artificial Intelligence[1] 20 December 1999 Why don't I have a girlfriend? This is a question that practically every male has asked himself at one point or another in his life. Unfortunately, there is rarely a hard and fast answer to the query.

SCHOPENHAUER'S 38 STRATAGEMS, OR 38 WAYS TO WIN AN ARGUMENT Arthur Schopenhauer (1788-1860), was a brilliant German philosopher. These 38 Stratagems are excerpts from "The Art of Controversy", first translated into English and published in 1896. Carry your opponent's proposition beyond its natural limits; exaggerate it. 7 Man-Made Substances that Laugh in the Face of Physics The universe is full of weird substances like liquid metal and whatever preservative keeps Larry King alive. But mankind isn't happy to accept the weirdness of nature when we can create our own abominations of science that, due to the miracle of technology, spit in nature's face and call it retarded. That's why we came up with...

Digital Games for Physical, Cognitive and Behavioral Health By: Alvaro Fernandez The Robert Wood John­son Foun­da­tion (RWJF) just announced more than $1.85 mil­lion in grants for research teams to study how dig­i­tal games can improve play­ers’ health behav­iors and out­comes (both brain-based and behavioral). The press release: Nine Lead­ing Research Teams Selected to Study How Dig­i­tal Games Improve Play­ers’ Health “Dig­i­tal games are inter­ac­tive and expe­ri­en­tial, and so they can engage peo­ple in pow­er­ful ways to enhance learn­ing and health behav­ior change, espe­cially when they are designed on the basis of well-researched strate­gies,” said (UC Santa Barbara’s Dr.

Meaning of Halflife I'd like to illustrate what this really means. If living creatures had halflives the way radioactive atoms do, the world would be a very different place. What do you mean? Suppose there's an alien species with a halflife of, say, 70 years. You randomly pick out 16 baby aliens and track them to see how long they live. After 70 years, of course, 8 of them will still be alive. The Noticing Game - (moving, sexy, fun) This little game had us both in tears the last time I played it… And the time before that, we were both smiling so much our cheeks hurt… It’s simple, easy, in-the-moment, and you can play it with your lover, a friend, on a date, or with someone you’ve just met. Below is a description of the game, an excerpt from our Games Night Manual. The full version, with lots of other connection-building games, is included for everyone who signs up for the ACL training.

How To Become A Hacker Copyright © 2001 Eric S. Raymond As editor of the Jargon File and author of a few other well-known documents of similar nature, I often get email requests from enthusiastic network newbies asking (in effect) "how can I learn to be a wizardly hacker?". Back in 1996 I noticed that there didn't seem to be any other FAQs or web documents that addressed this vital question, so I started this one. A lot of hackers now consider it definitive, and I suppose that means it is. The 5 Weirdest Ways Music Can Mess With the Human Brain It's no secret that many people prefer to listen to music when they work out. But music doesn't just make physical activity more pleasant -- it actually makes our physical performance measurably better. When listening to music, people are able to hold heavy weights for longer than when they're standing in silence. They can also complete sprints in smaller amounts of time and are even able to reduce their oxygen intake. This is why Rocky does all of his training in musical montages. How the hell does music do that?