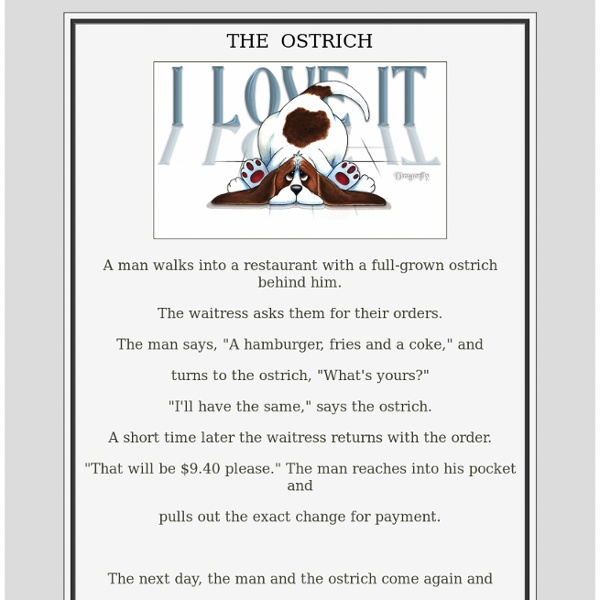 A man walks into a restaurant with a full-grown ostrich behind him. The waitress asks them for their orders. The man says, "A hamburger, fries and a coke," and turns to the ostrich, "What's yours?" "I'll have the same," says the ostrich. The next day, the man and the ostrich come again and the man says, "A hamburger, fries and a coke." The ostrich says, "I'll have the same." Again the man reaches into his pocket and pays with exact change. This becomes routine until the two enter again. "The usual asks the waitress?" "No, this is Friday night, so I will have a steak, baked potato and a salad," says the man. "Same," says the ostrich. Shortly the waitress brings the order and says, "That will be $32.62." Once again the man pulls the exact change out of his pocket and places it on the table. The waitress cannot hold back her curiosity any longer. "Excuse me, sir. How do you manage to always come up with the exact change in your pocket every time?" found an old lamp. me two wishes. would always be there."

Still life: Bent objects UPDATE: The Return of Bent Objects Wires transform these objects from inanimate to hilarious works of art. Little polish girl McDonalds as Sculpture Materials Yeah, this is where those come from Funny keeping a zipper up tip Posted on November 2, 2011 in Humor If you’re new here, you may want to subscribe to our RSS feed or follow us on Facebook or Twitter . Thanks for visiting! The 29 Best Charlie Sheen Quotes: The Definitive List from Charlie Sheen Quotes Wow, so this Charlie Sheen quote machine just won't slow down. I think it's safe to say that there's never been a human being in the history of talking human beings who has had so many amazing quotes. So many! And the scary thing is that it's been less than a week.

"Tear Off" Wallpaper by ZNAK Applying wallpaper to walls has never been so fun. With this perforated “tear off” wallpaper from ZNAK, you can customize the appearance of your space by tearing off the pieces as you please. The wallpaper is created out of non-woven material and the shapes are inspired by the the transformation process of snakes. True Facts Facts - interesting, provocative, well-seasoned One out of ten children in Europe are conceived on an IKEA bed. Antarctica is the only continent without reptiles or snakes. An eagle can kill a young deer and fly away with it. Achievement Unlocked! — Evil Routers Achievement Unlocked! 175 comments I had a little fun with an online achievement generator (and stole some from a Something Awful thread). If you work in IT for any period of time, I’m sure you can relate. P.S. If you like these, you may get a laugh out of “You know you’re a computer security guy when …” and “10 Things Your IT Guy Wants You to Know” also.

The Principia Discordia A jug of wine, A leg of lamb And thou! Beside me, Whistling in the darkness. Be Ye Not Lost Among Precepts of Order... - The Book of Uterus 1;5 Some excerpts from an interview with Malaclypse the Younger by THE GREATER METROPOLITAN YORBA LINDA HERALD-NEWS-SUN-TRIBUNE-JOURNAL-DISPATCH-POST AND SAN FRANCISCO DISCORDIAN SOCIETY CABAL BULLETIN AND INTERGALACTIC REPORT & POPE POOP. GREATER POOP: Are you really serious or what?MAL-2: Sometimes I take humor seriously. Artist: Nick Gentry “Nick Gentry is a British graduate of Central St Martins and has exhibited in the UK, USA and Europe. As part of a generation that grew up surrounded by floppy disks, VHS tapes, polaroids and cassettes, he is inspired by the sociological impact of a new internet culture… …His portraits use a combination of obsolete media formats, making a comment on waste culture, life cycles and identity. Using old disks as a canvas, these artefacts are combined to create photo-fits and identities that may draw connections to the personal information that is then forever locked down underneath the paint… …This has led to an exploration of the ways in which humankind is integrating with technology.

Play Pokemon - Silver Version online at playR! Overview The box art for Silver. Pokemon Gold and Silver were released on October 14, 2000 in North America (November 21, 1999 in Japan and April 6, 2001 in Europe) for the Game Boy (although it also supported the Super Game Boy and Game Boy Color). Development was done by Game Freak, publishing by Nintendo, and marketing and licensing from The Pokemon Company. Taking place in the Johto region, the second generation of Pokemon introduced 100 new Pokemon. Besides unique Pokemon and other minor details, Gold and Silver are identical to each other.

Incredible macro-photography of people’s eyes He received a PhD in Theoretical Physics from Yerevan State University in 2001 for research in the field of Quantum Chaos and investigations in the field of Quantum Technologies. Yet, Suren Manvelyan is probably best known for his stunning macro-photography. Especially popular is his series of close-ups of human eyes called Your Beautiful Eyes.