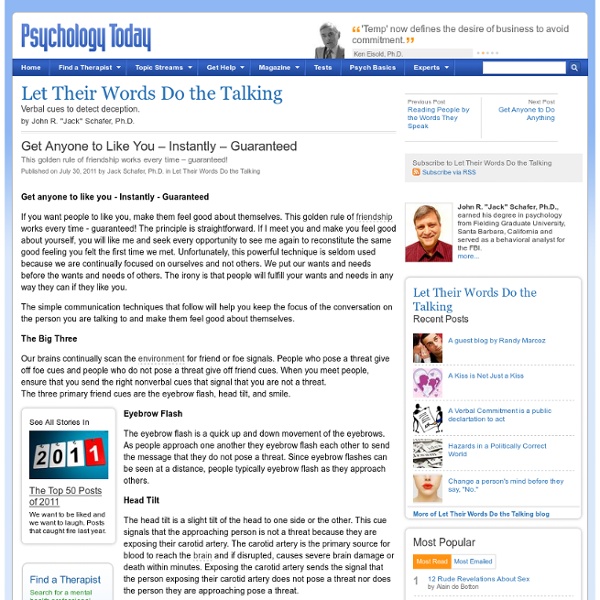 Get anyone to like you - Instantly - Guaranteed If you want people to like you, make them feel good about themselves. This golden rule of friendship works every time - guaranteed! The principle is straightforward. If I meet you and make you feel good about yourself, you will like me and seek every opportunity to see me again to reconstitute the same good feeling you felt the first time we met. Unfortunately, this powerful technique is seldom used because we are continually focused on ourselves and not others. The simple communication techniques that follow will help you keep the focus of the conversation on the person you are talking to and make them feel good about themselves. The Big Three Our brains continually scan the environment for friend or foe signals. Eyebrow Flash The eyebrow flash is a quick up and down movement of the eyebrows. Head Tilt The head tilt is a slight tilt of the head to one side or the other. Smile A smile sends the message "I like you." Empathic Statements Example 1

Best Books Channel: Professional Development for Educators Best Books for... Be sure to check out our other Best Book archives:Best Books for StudentsBest Books for Developing Classroom Teaching ThemesBest Books for Parents and ParentingBest Books for School Leaders Teaching Outside the Box Subtitled, "How to grab your students by their brains," this paperback edition of LouAnne Johnson's well-reviewed book promises a lot of practical guidance for today's classroom teacher. Including a step-by-step plan to make the first week of school a success, the book's advice ranges across classroom management and motivational topics to strategies for teaching the reluctant reader. This is a book not only to read, but also to share with colleagues. Click to learn more or to purchase this book.

The Forer Effect The Forer effect is a term used to describe the tendency of people to interpret general statements as being accurate for them personally, even when they are not. Specifically, when people are given a random personality assessment and told it has been written for them personally, they will tend to rate it as highly accurate. The term is named after American psychologist Bertram R. Forer (1914-2000), who conducted an experiment in 1948. Forer gave a personality test to a group of students, then asked them to rate the test results for accuracy (i.e. how well the test results described their unique personality). Students rated their results on average at 85.2% accurate.

6 Beloved Characters That Had Undiagnosed Mental Illnesses It's unlikely that the writers who created these characters consciously decided they would give them an undiagnosed mental disorder as one of their traits. Maybe they were just borrowing behaviors of a "quirky" friend, or maybe the writers suffered from the disorder and wrote the characters to mimic their own life. But one way or another, these characters show all the symptoms ...

How to learn more and study less Photo by fatal Cleopatra Editor’s note: This is a guest post written by Scott Young. Every Monday is Productivity & Organization Day at Zen Habits.The title of this post sounds impossible right? My current GPA is a 4.2, which rests midway between an A and an A+. Despite this, I didn’t actually spend much time studying. How to Detect Lies - body language, reactions, speech patterns Interesting Info -> Lying Index -> How to Detect Lies Become a Human Lie Detector (Part 1) Warning: sometimes ignorance is bliss.

The powers of the mother of pearl Home » Miscellaneous Feng Shui Topics Oriental and Chinese cultures as well as many occidental ones follow traditions based on the belief that some precious stones have important symbolisms and powers. The mother of pearl is one of them, and it is often used for feng shui practitioners in order to attract a benefit towards a strategic house point or to improve a specific life area.

5 Freewriting Secrets for Being a "Genius" You've heard of freewriting, certainly. At its most basic, it's about forcing your internal editor to stay away while you splash your most raw and unusual thoughts onto the page. In Accidental Genius: Using Writing to Generate Your Best Ideas, Insights, and Content (2nd edition, revised & updated), Mark Levy tells how he uses freewriting, not only to loosen up his writing muscles, but to solve business problems of all kinds. Levy, author, writing teacher, and marketing strategist, shares a few "secrets" for making freewriting an indispensible tool: 5 Freewriting Tips

Fake it Till You Make it: 10 Ways to Feel Confident (Even When You Aren’t) “Original Fake” Photo Credit: courtesy of MashKulture Is your self-confidence natural, or a daily struggle? Many people’s confidence naturally wavers from day to day, leaving them too timid or confused at just the wrong time. Whether you are naturally confident or could use some better eye contact with your life, setting in place a few simple strategies goes a long way to stoke your inner confidence.