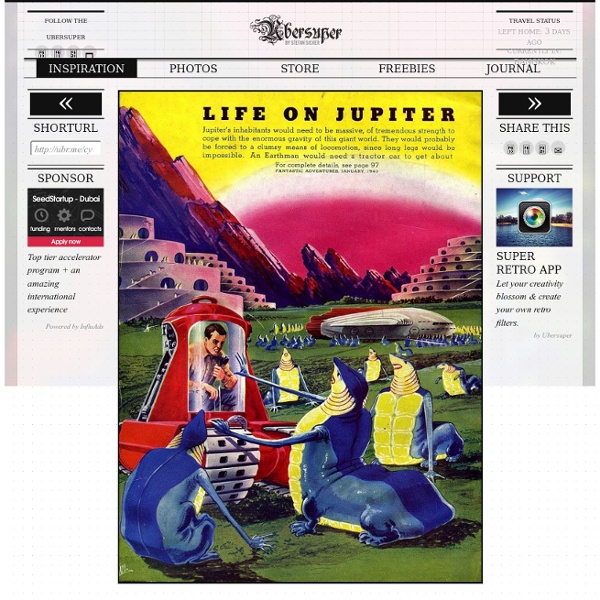 Retro Futurism Frank R. Paul was an illustrator of US pulp magazines in the science fiction field. He was born in Vienna, Austria… Frank R. Paul was influential in defining what both cover art and interior illustrations in the nascent science fiction pulps of the 1920s looked like. Many many years ago (~1940), Frank R. 7th of July 2010 Probably Related Retro Futuristic Illustrations by Klaus Bürgle Tavis Coburn’s Amazing Retro Program Covers #7 by disonyando Retro Style Recovery Kits Travel Status Back home since 54 days Currently in: Switzerland Oh dear, do you realise how old your browser is?

Artist Daniel Dociu Daniel Dociu is Chief Art Director for ArenaNet, the North American wing of NCSoft. Projects in which he participated: Guild Wars, Need for Speed, FIFA Soccer, MechWarrior, James Bond 007. Great architecture, fantastic and bright world you can see in his beautiful artworks. Some of amazing illustrations featured below were created for computer games. Hope his art will impress you with its immensity and grandeur! Guild Wars 2 Iceberg Ship Lessons Drawspace Pro Lessons are designed for artists of all levels and educators, and are logically organized into resources and activities. Eventually, all lessons and E-books authored by Brenda Hoddinott will be available here: four to eight brand new lessons and newly-revised older lessons are being added every month! Upgrade Now: Download all 246 lessons and 4 e-books! Try for Free: Download lessons marked as "Free"! Free 1.1.R1 Glossary Of Art Terms

Michał Dziekan Illustrator and character designer Michal Dziekan was born and raised in small town in south-western Poland. He moved to city Wroclaw where he attended Architecture on University of Technology. After three years he left school and moved to Warsaw to work in post production studio Platige Image as a concept artist and matte painter. He stayed in Platige Image from 2007 to 2011, where working on animated commercials and films he got opportunity to gain experience in such fields as vfx compositing, motion graphics animation, animation direction and directing. During that time he was developing as an illustrator and character designer. BACK TO THE FUTURE : Irina Werning I love old photos. I admit being a nosey photographer. As soon as I step into someone else’s house, I start sniffing for them. Most of us are fascinated by their retro look but to me, it’s imagining how people would feel and look like if they were to reenact them today… Two years ago, I decided to actually do this. So, with my camera, I started inviting people to go back to their future..

Why Nikola Tesla was the greatest geek who ever lived Additional notes from the author: If you want to learn more about Tesla, I highly recommend reading Tesla: Man Out of Time Also, this Badass of the week by Ben Thompson is what originally inspired me to write a comic about Tesla. Ben's also got a book out which is packed full of awesome. There's an old movie from the 80s on Netflix Instant Queue right now about Tesla: The Secret of Nikola Tesla.

Charlie Layton Graphic designer Charlie Layton started sketching for his own amusementRealised his fridge door was the same material as a dry-erase boardDrawings have gone viral and his website crashed from the extra traffic By Steve Robson Published: 17:03 GMT, 15 January 2013 | Updated: 04:46 GMT, 18 January 2013 It started out as a way for freelance designer Charlie Layton to entertain himself over his morning coffee. The Philadelphia-based artist realised his fridge freezer door was made out of the same material as a dry-erase board and was perfect for him to practice doodling.

Sheffield History <div class='message error'><strong>Javascript Disabled Detected</strong><p>You currently have javascript disabled. Several functions may not work. Please re-enable javascript to access full functionality. Explosive! Spectacular pictures of the moment a bullet shatters food Don't try this at home... Caters If you have ever wondered what would happen if you shot a coconut, here is your answer... Looking almost more like an exploded loaf of bread than the exotic fruit, the bullet's direction and the energy of the impact is caught on camera. Photographer Alan Sailer uses an air rifle and firecrackers to create these images. Based in California, USA, the 57-year-old has rigged up a camera with a special flash in his garage using parts off eBay.

Austin Kleon Tuesday, April 14th, 2009 This is poem 14 out of 30 celebrating April as National Poetry Month (Inter)national Newspaper Blackout Poetry Month. I thought this poem looked kind of familiar, so I dug in the archives and found a similar unfinished poem (and finished it): TODAY’S SHOUT-OUT! goes to Wim Lockefeer for his continued support. Top 10 Most Popular Lists Ever Today is Listverse’s second birthday! In that time we have had over 70 million visits! Because it is our birthday, I have decided to do a list of our most popular lists since we opened our cyber-doors two years ago. I am hoping that it will introduce at least a few of you to some lists you may have overlooked. The statistics I used to determine the order is total unique views – that excludes repeat visits from people who may be wanting to check up on the comments. Be sure to mention your own favorite lists in the comments.

40 Awesome Futuristic City Illustrations Cities have always been a place where people share ideas and knowledge. I think this one of the reasons why cities have been inspiring artists to create many futuristic cityscapes illustrations. I collected here some of these awesome sci-fi city illustrations. It would be very cool if you could suggest more great illustrations and artists to our list. Stay up to date with Zeemp news, simply follow @zeemp. John Alvin – johnalvin.com