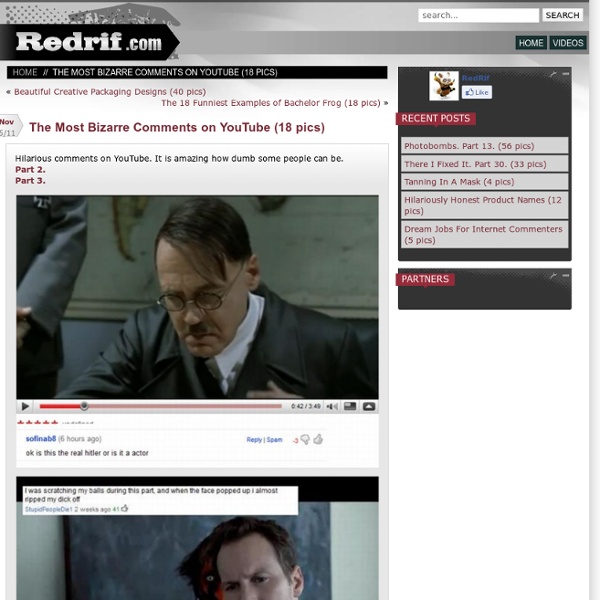 Cosmic Spew — Our Minds May Never Be Able To Comprehend… Monday, February 3, 2014 NASA Releases Stunning Image of Saturn's Hexagonal North Pole Posted By: Chris Morrow 20 More GIF Reactions to Real-Life Situations I’m sure you guys can identify with a lot of these. This first one is especially timely… The night before the first day of school: When someone wakes you up: Star Wars Han Solo Carbonite Chocolate

Oh, So That’s What That Really Means (13 Pics) November 7, 2011 | 44 Comments » | Topics: LOL, Pics (via) Hot Stories From Around The Web Damn You Auto Correct Reveals 9 Funniest Texts of the Year The auto-correct feature on mobile phones can be a blessing for catching text message typos but also a nightmare when a word is automatically replaced with an embarrassing one. Throwback Thursdays: Betchiest Trends of the 90s Polly Pocket Talk about unrealistic body expectations Tamagotchi There was no greater feeling than cleaning up its poop.

People - January, 2009 Ethan Albright’s letter to John Madden about being the lowest rated player in Madden Football To: John MaddenCC: Electronic Arts SportsFrom: Ethan AlbrightRe: Being the worst rated player on Madden ‘07 Hi, John, my name is Ethan Albright. I play line for the Washington Redskins. You probably already knew that, so I’ll continue. I am writing in regards to the overall player rating of 53 that I have received in Madden NFL Football 2007. I feel that this is fucking bullshit and you should kiss my mother-fucking ass. World's funniest joke The "world's funniest joke" is a term used by Richard Wiseman of the University of Hertfordshire in 2002 to summarize one of the results of his research. For his experiment, named LaughLab, he created a website where people could rate and submit jokes.[1] Purposes of the research included discovering the joke that had the widest appeal and understanding among different cultures, demographics and countries.[citation needed]

Water is dangerous This was found on the newsgroup: rec.humor.funny A student at Eagle Rock Junior High won first prize at the Greater Idaho Falls Science Fair, April 26. He was attempting to show how conditioned we have become to alarmists practicing junk science and spreading fear of everything in our environment. In his project he urged people to sign a petition demanding strict control or total elimination of the chemical "dihydrogen monoxide."