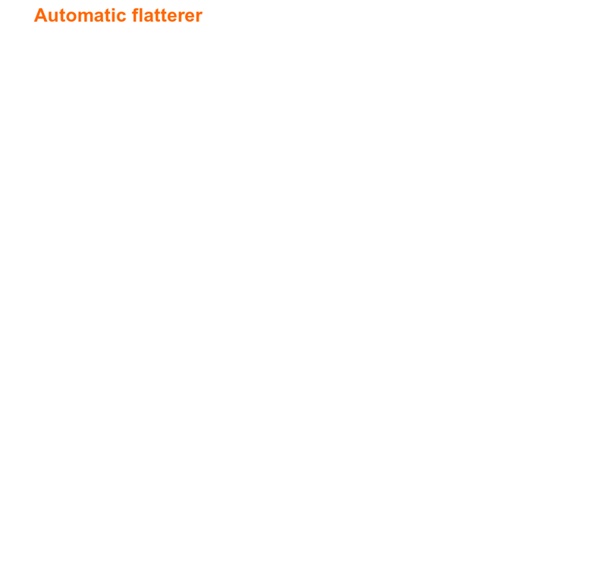 8 Things to Stop Doing Right Now The main purpose of this site is to help you be who you want to be and live the life you want to live. I think everyone deserves that at the bare minimum, and I believe that everyone can achieve it. Therefore, a lot of the messages that I share here are positive, inspiring and action orientated. With this post I want to change direction, and not cover the things you should be doing, but the things you shouldn't be doing.

How to Make Google Translate Beatbox Not sure if this falls in the category of Easter Egg or clever manipulation, but either way, there go our afternoons: Redditor harrichr has devised a scheme for turning Google Translate into a makeshift beatbox machine. 1) Go to [1] Google Translate2) Set the translator to translate German to German3) Copy + paste the following into the translate box: pv zk pv pv zk pv zk kz zk pv pv pv zk pv zk zk pzk pzk pvzkpkzvpvzk kkkkkk bsch4) Click “listen”5) Be amazed :) For the lazy, just click this link and it’ll be done for you.

Bizarre Websites On Which You Can Kill Time With Style - Smashing Magazine - StumbleUpon Modern Web-building technologies allow designers to realize their most daring and creative ideas. Enhanced interactivity and a remarkable visual appearance can be achieved by means of such tools as Flash, JavaScript and Papervision3D, to name just a few. These strengths usually impress and entertain visitors and thus are often used for conceptual artistic presentations and promotional campaigns. In this post, you’ll find a collection of amusing websites that, by combining unconventional (and sometimes bizarre) ideas and clever JavaScript and Flash effects, will entice you to play on them for an embarrassing long time.

Badass of the Week: Anthony Omari - StumbleUpon Anthony Omari Late on the night of January 23, 2012, a 24 year-old Kenyan uber-hero named Anthony Omari awoke to find three gigantic dudes with machetes standing over his bed. He knew right away that they weren't there to sell Girl Scout cookies or ask him for a jumping mid-air high-five. Packing Heat? You Can Show it in Philadelphia A police officer spots a citizen on a crowded city street with a handgun proudly strapped to his hip. The officer draws his own gun, and asks the gentleman to kindly get on the ground (using slightly stronger language.) The man insists that he has the right to carry his gun openly.

The Dalai Lama’s 18 Rules For Living May 6, 2011 | 42 Comments » | Topics: Life, List At the start of the new millennium the Dalai Lama apparently issued eighteen rules for living. Since word travels slowly in the digital age these have only just reached me. Here they are. 99 Resources to Research & Mine the Invisible Web College researchers often need more than Google and Wikipedia to get the job done. To find what you're looking for, it may be necessary to tap into the invisible web, the sites that don't get indexed by broad search engines. The following resources were designed to help you do just that, offering specialized search engines, directories, and more places to find the complex and obscure. Search Engines Whether you're looking for specific science research or business data, these search engines will point you in the right direction. Turbo10: On Turbo10, you'll be able to search more than 800 deep web search engines at a time.

mental_floss Blog & 11 Pencil Vs. Camera Images - StumbleUpon 986 653Share10.7K Born in Abidjan, Ivory Coast and now living in Belgium, Ben Heine is an amazing artist who overlaps hand-drawn works of art with photos to create stunning images. I selected eleven of his Pencil Vs. Camera images from his site, but you should check out all his awesome work if you have time. The 48 Laws of Power - Wikipedia, the free encyclopedia - StumbleUpon Background[edit] Greene initially formulated some of the ideas in The 48 Laws of Power while working as a writer in Hollywood and concluding that today's power elite shared similar traits with powerful figures throughout history.[5] In 1995, Greene worked as a writer at Fabrica, an art and media school, and met a book packager named Joost Elffers.[4][8] Greene pitched a book about power to Elffers and six months later, Elffers requested that Greene write a treatment.[4] Although Greene was unhappy in his current job, he was comfortable and saw the time needed to write a proper book proposal as too risky.[10] However, at the time Greene was rereading his favorite biography about Julius Caesar and took inspiration from Caesar's decision to cross the Rubicon River and fight Pompey, thus inciting the Great Roman Civil War.[10] Greene would follow Caesar's example and write the treatment, which later became The 48 Laws of Power.[10] He would note this as the turning point of his life.[10]