Watch Whose Line is it Anyway? Free! 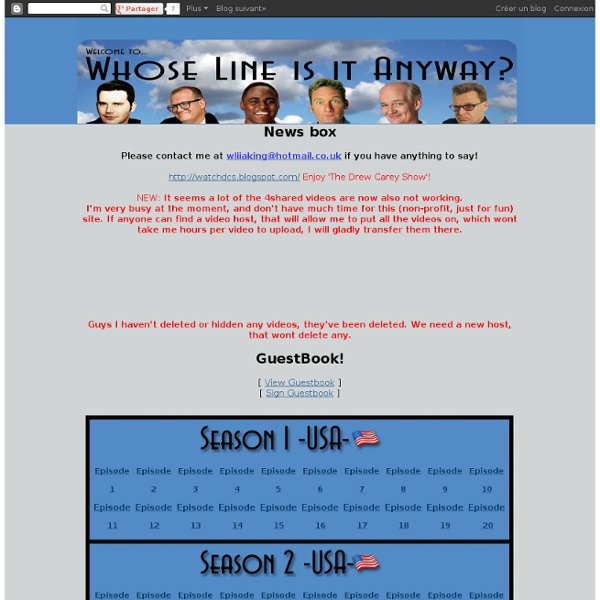 Laugh IT Out 25 Spectacular Movies You (Probably) Haven’t Seen Pt. 2 Human Traffic Very unique comedy about the drug/club culture in the UK. Five friends ponder society, drug use and their own lives as they go about their usual weekend of snorting, smoking, popping, dancing and sex. The Matador Pierce Brosnan plays an assassin going through a mid-life crisis as he approached retirement. The Good, The Bad, And the Weird Two comical outlaws and a bounty hunter fight for a treasure map in 1940s Manchuria while being pursued by the Japanese army and Chinese bandits. Tucker and Dale vs. A group of college students go camping for the weekend and, through a series of unlucky events, begin thinking that the harmless Tucker & Dale (pictured above) are trying to kill them. New Kids Turbo An absolutely nutty movie from the Netherlands. Kiss, Kiss, Bang, Bang KKBB is a murder-comedy (?) Big Trouble Big Trouble is one of those movies where all of these different people end up intertwined at the end of the movie. Once Upon A Time In The West Persepolis 13 Assassins Dr. Drive

Halloween Special: The 9 Scariest Short Internet Films This Halloween night, we bet that a lot of you will be watching at least one scary movie in order to get into the proper spirit (no pun intended.) If you’re in the mood for a little spine-chilling fear before the main course, though, you should check out some of the horror fare that the internet has to offer; it’s proof positive that a bigger budget does not always equal bigger scares (we’re looking at you, Wes Craven.) 9. Still Life Still Life has the one of the most unique premises around: a man drives into a town full of mannequins that (apparently) move when he’s not looking at them and freeze when he does, like an incredibly dark and demented version of Toy Story. When our “hero” uses his powers to break into a house and confront the owners, he’s able to crush them with ease only to find out that things are not always as they seem. 8. 7. 6. 5. Don’t be fooled by the gentle, soft animation style; this short is just as dark as any of the others on this list. 4. 3. 2. 1.