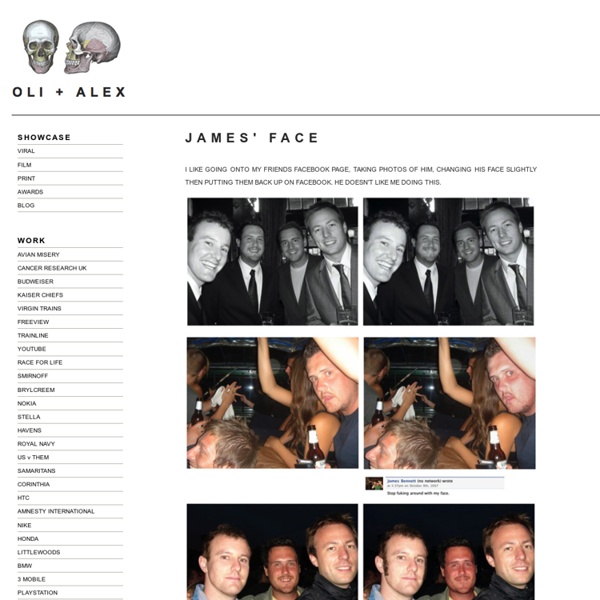 Human World Human World The women of the Tiwi tribe in the South Pacific are married at birth. When Albert Einstein died, his final words died with him. The nurse at his side didn't understand German. St Patrick, the patron saint of Ireland, was not Irish. The lance ceased to be an official battle weapon in the British Army in 1927.

The Funniest Police Blotters Ever Printed from Oh, News! If there was ever a reason to save newspapers (and print media in general, I guess), it's the police blotter. Idiots keep breaking the law and someone has to keep track. (via) a night on the streets of new york photo Random photo Submit your photo Stumble Thru long exposure photography, urban photography Tags:

Never Be My Friend When I'm bored, I browse through my friends' Facebook images, choose my favorites, and draw them. Sometimes I take... liberties. Let's just call it artistic license. R.I.P. Who doesn't like a blonde joke? A blonde walks into a bank in New York City and asks for the loan officer. She says she’s going to Europe on business for two weeks and needs to borrow $5,000. The bank officer says the bank will need some kind of security for the loan, so the blonde hands over the keys to a new Rolls Royce. The car is parked on the street in front of the bank; she has the title, and everything checks out. The bank agrees to accept the car as collateral for the loan. The bank’s president and its officers all enjoy a good laugh at the blonde for using a $250,000 Rolls as collateral against a $5,000 loan.

14 Cool And Unusual Aquariums EmailEmail Do you live a stressful life, have high blood pressure and insomnia? Keeping an aquarium may be a good therapy for you! Studies going back as far as the late 80’s have shown that watching those beautiful fish going about their daily business can make you feel calm, reducing stress levels and your blood pressure. 25 Great Calvin and Hobbes Strips. Why Bill Watterson is our hero. We've re-launched Progressive Boink, friends! Our new front page is here. Hope you enjoy. Hundreds of comic strips have been published in newspapers. The majority are terrible, and almost all the rest are mediocre.

BACK TO THE FUTURE 2 (2011) : Irina Werning - Photographer Now its time for KOREA, TAIWAN AND TOKYO. If you live here and want to participate in my project, email me amazing old pictures to : backtothefuturepics@gmail.com Riff Raff 1976 & 2011 London Andy 1967 & 2011 Los Angeles Johanes 1994 & 2011 Hamburg Price Tag Fails Some of these might be innocent mistakes, but I imagine most of them are the result of bored workers.