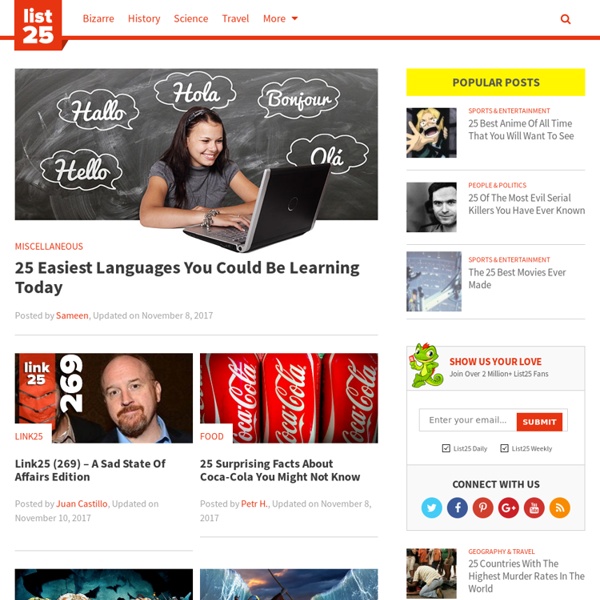 List of lists of lists Some articles that consist of a list of things that are themselves about lists of things, such as the lists of lists listed below. General reference[edit] Culture and the arts[edit] Literature[edit] Art and the arts[edit] Performing arts[edit] Webcomic at the Speed of Light ''She always gets this way when the moon is really bright.'' And a comic is here despite Wes’ batteries running out while Tony dug a hole. Some of our popular stuff:

11 cheap gifts guaranteed to impress science geeks Science comes up with a lot of awesome stuff, and you don't need a Ph.D, a secret lab, or government funding to get your hands on some of the coolest discoveries. We've got a list of 11 mostly affordable gifts that are guaranteed to blow your mind, whether or not you're a science geek. Click on any image to see it enlarged. 1. Aerogel Also known as frozen smoke, Aerogel is the world's lowest density solid, clocking in at 96% air. The 100 Best, Most Interesting Blogs and Websites of 2012 (Categorized) Editor’s note: 2015’s list of the best, most interesting websites has arrived! I don’t know about you, but I’m constantly running into so many cool websites I want to remember or recommend to people but I don’t always have time to make a note of them, add them to Evernote, bookmark them in Delicious, etc. So this is a good example of a post I created as a personal (and completely unscientific) resource that other people will probably benefit from as well. Some of these sites are pretty new while others have been around for a while now, but they are all awesome right now in 2012.

Todd Allison & the Petunia Violet : Manga / Comic Series on MangaMagazine.net RELEASED:Apr 19, 2011 LAST UPDATED:Apr 19, 2011 BLANKS STATUS:Missing (28 of 28) Petunia delivers a letter for Todd Allison and she thinks about how mysterious he is. 10 Laws of Productivity You might think that creatives as diverse as Internet entrepreneur Jack Dorsey, industrial design firm Studio 7.5, and bestselling Japanese novelist Haruki Murakami would have little in common. In fact, the tenets that guide how they – and exceptionally productive creatives across the board – make ideas happen are incredibly similar. Here are 10 laws of productivity we’ve consistently observed among serial idea executors: 1. Break the seal of hesitation.

The 100 Best, Most Interesting Blogs and Websites of 2013 Editor’s note: 2015’s list of the best, most interesting websites has arrived! Welcome to one of the web’s most anticipated lists of the year: The 100 Best, Most Interesting Blogs and Websites of 2013. This is the second such list I have made since founding DailyTekk and it’s very special. A website can only be featured ONCE in this annual series, so make sure to check out last year’s list so you don’t miss 100 other amazing sites and blogs.

Barcode Yourself by Scott Blake Barcode Yourself is a complete, interactive experience in the series of barcode art, created using the personalized data of participants. Enter an individual's gender, weight, height, age and location, and the barcode is formed using real-world data. The individualized barcode can then be printed, mapped, scanned, even depicted on a t-shirt or coffee mug. Uber-geeks can even test out their barcodes on their next grocery run. It is in scanning a barcode that the project reveals its humor, like a banner that reads: Disclaimer! Human beings are not merely worth somewhere between one cent and 10 dollars. Explore Weird & Wonderful Lists At Snagsta What results is that you find all sorts of wonderful and weird lists including tourism advice, motivation tips, startup advice, book lists, movie lists and much more. There’s always new lists to check out, so it’s definitely somewhere you could head back to on a regular basis just to get a little more inspiration. Signing up at Snagsta only takes a moment, regardless of whether you create a log in or use Facebook Connect to log in. You’ll be ready to go in no time at all.

The First Zombie Proof House Somehow, ritual drunk-conversation concerning team captains for the apocalypse has become a major part of the lives of 20-somethings. Having been matured in the Grandaddy-crowned masterpiece film (put “A.M. 180” on and forget that you have a job) 28 Days Later and the best-selling Zombie Survival Guide, we’re all a little too ready to deal with the 2012 zombie apocalypse of our dreams. “The Safe House,” designed by KWK Promes, starts to get eerily close to something I could work with, if say 200 bludgeoned members of the undead army came over to eat their way into borrowing some sugar. “The most essential item for our clients was acquiring the feeling of maximum security,” begins the designers’ website in the summary of the structure.

Bucket List Creation Websites & Apps With so many list creation sites out there it can be difficult to choose which one to use. You’ll want to consider where your friends are gathering to share their lists. Aside from that, here are some thoughts about 19 sites and 19 apps and what they have to offer. Almost all are free and generally require registering an account to use.

20 Awesome Products And Design Ideas September 2, 2011 | 48 Comments » | Topics: Design, Pics Hot Stories From Around The Web Other Awesome Stories 101 Things in 1001 Days Some of you will remember my 101 Things to do in 1001 Days challenge, which I started way back at the start of 2009 in Estonia, and ended a few days before my 30th birthday last year. For those of you who don’t, the idea is that you come up with 101 things you want to do in the next 1001 days, and aim to check them all off your list. The goals must be specific, not vague – things that you can confidently check off the list as having completed. (For example – instead of “get fit”, find measurable ways of achieving that, like “go to the gym 3 times a week for 3 months”, or “go to an exercise class”.)