3D-DREAMING "Architecture from a digital point of view" 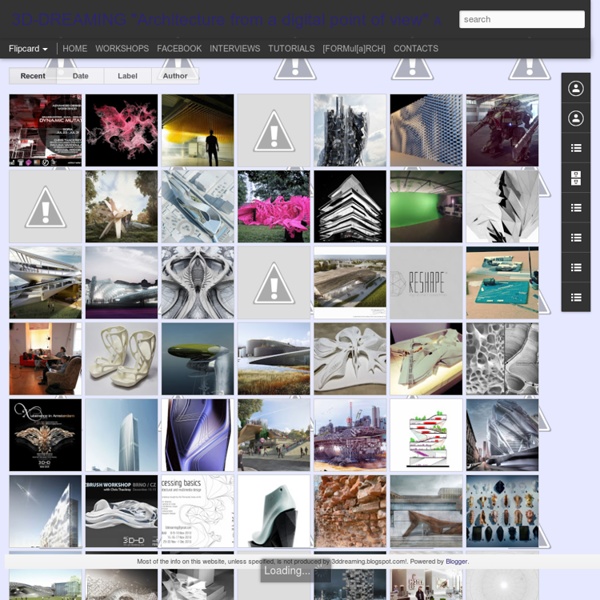 Shape Interrogation for Computer Aided Design and Manufacturing (Hyperbook Edition) To display this page you need a browser with JavaScript support. Next: Preface Contents Index Nicholas M. OpenMesh What is OpenMesh? OpenMesh is a generic and efficient data structure for representing and manipulating polygonal meshes. OpenMesh is developed at the Computer Graphics Group, RWTH Aachen. It was funded by the German Ministry for Research and Education ( BMBF). It was designed with the following goals in mind: CS 294-1: Mesh Generation and Geometry Processing This class is for computer graphics students who use triangle meshes, engineers and scientists who want to generate unstructured meshes for the finite element method or for manufacturing, and students of GIS (geographical information systems) who work with TINs (triangulated irregular networks). It will be accessible to students in engineering and the sciences, as well as in computer science. The only prerequisite is a thorough familiarity with fundamental data structures (CS 61B or the equivalent). Topics include:

Mesh Subdivision: Loop and Catmull-Clark – bespoke geometry Computational designers who work with meshes in Rhino + Grasshopper will inevitably be familiar with Giulio Piacentino’s brilliant Weaverbird plug-in. It provides a great variety of outstanding tools for creating, managing and subdividing meshes. Using mesh subdivision and smoothing approaches allows for designers to start from coarse geometries and then rapidly transform them into fluid and organic shapes. However, Weaverbird’s implementations of the Loop and Catmull-Clark subdivision algorithms – two of the most standard methods for these approaches – lack some desirable features, specifically the ability for users to designate anchors and creases within the mesh. For a design project currently underway at CITA, there has been a need to assert more local control over subdivided meshes, for which I developed this implementation of these algorithms. It was written in C# for Grasshopper, using the Plankton halfedge mesh library developed by Daniel Piker and Will Pearson.

Non-uniform rational B-spline In general, editing NURBS curves and surfaces is highly intuitive and predictable. Control points are always either connected directly to the curve/surface, or act as if they were connected by a rubber band. Depending on the type of user interface, editing can be realized via an element’s control points, which are most obvious and common for Bézier curves, or via higher level tools such as spline modeling or hierarchical editing. Historical background[edit] As computers were introduced into the design process, the physical properties of such splines were investigated so that they could be modelled with mathematical precision and reproduced where needed. Pioneering work was done in France by Renault engineer Pierre Bézier, and Citroën's physicist and mathematician Paul de Casteljau.

Rhinoceros - NURBS NURBS, Non-Uniform Rational B-Splines, are mathematical representations of 3‑D geometry that can accurately describe any shape from a simple 2‑D line, circle, arc, or curve to the most complex 3‑D organic free-form surface or solid. Because of their flexibility and accuracy, NURBS models can be used in any process from illustration and animation to manufacturing. NURBS geometry has five important qualities that make it an ideal choice for computer-aided modeling. Realtime Deformation of Constrained Meshes Using GPU In GPU Computing and Applications, pp. 15-34. Springer Singapore, 2015 Abstract Constrained meshes play an important role in freeform architectural design, as they can represent panel layouts on freeform surfaces. It is challenging to perform realtime manipulation on such meshes, because all constraints need to be respected during the deformation while the shape quality needs to be maintained. This usually leads to nonlinear constrained optimization problems, which are challenging to solve in real time.

Interactive Design Exploration for Constrained Meshes Computer-Aided Design 61: 13–23, 2015 Abstract In architectural design, surface shapes are commonly subject to geometric constraints imposed by material, fabrication or assembly. Rationalization algorithms can convert a freeform design into a form feasible for production, but often require design modifications that might not comply with the design intent. In addition, they only offer limited support for exploring alternative feasible shapes, due to the high complexity of the optimization algorithm.