The Fastest Way to Change Something About Yourself 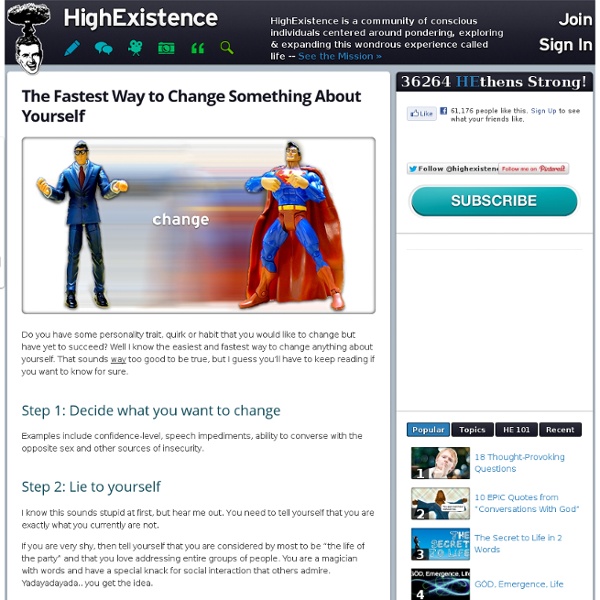 Do you have some personality trait, quirk or habit that you would like to change but have yet to succeed? Well I know the easiest and fastest way to change anything about yourself. That sounds way too good to be true, but I guess you’ll have to keep reading if you want to know for sure. Step 1: Decide what you want to change Examples include confidence-level, speech impediments, ability to converse with the opposite sex and other sources of insecurity. Step 2: Lie to yourself I know this sounds stupid at first, but hear me out. If you are very shy, then tell yourself that you are considered by most to be “the life of the party” and that you love addressing entire groups of people. Step 3: Imagine the change in yourself Create a minute-long movie in your head of yourself after the change has been made. It’s almost like you’re planting a false memory in your head. Step 4: Become a method actor You need to emulate the person you want to be as if you already are him/her. Step 5: Believe

7 Psychotic Pieces of Relationship Advice from Cosmo We get it. Guys are tough to figure out: There's like 24 possible combinations that you can make with 1) beer 2) food 3) sex and 4) sports. No wonder their girlfriends have to resort to lady magazines to gain insight into the buzzing hive that is the male mind. We know most women laugh that stuff off as cheap entertainment not to be taken seriously, but what if they actually did listen to all of the advice? It'd pretty much turn into a nightmare of paranoia and petty revenge. He Shares the Details of His Day, Therefore He Must Be Hiding Something Men just aren't as communicative as women, especially when they're stressed. Guess what? "Don't be fooled by a guy who offers up tons of minor bits of information about where he's been or what he's been doing. "How many more facts before you'll love me?" Yes, according to Cosmo, by sharing so much about the stressful day he just had, the man is actually revealing that he's cheating on his partner (probably with Sarah). Sheesh, what a rough day.

How We Can (Actually) Change The World – Pt. 1/3 What this is not: A wishy-washy, positive thinking, pie-in-the-sky idea about changing the world. I will not be advocating the power of group meditation, overthrowing the powers that be or anything else that can be easily scoffed at. What this is: A three-part series covering logical AND tangible ways to instigate awesome change on a global scale. I will cover the following concepts in order: The single change the world needs most dearlyHow real change occursThe specific mission I think will bring about those changes. The illusive, magical element that the world is missing most right now is something you probably aren’t aware is gone. We are missing community. Think of the best days of your life. We are indoctrinated into wanting a high-paying job so that we can buy our own houses, filled with our own furniture, our own silverware — our own nook in the universe. We are going about getting what we truly want in the most backwards way possible. The Age of Separation P.S. Ways to read it:

Inside Job (2010) Top 10 Common Faults In Human Thought Humans The human mind is a wonderful thing. Cognition, the act or process of thinking, enables us to process vast amounts of information quickly. For example, every time your eyes are open, you brain is constantly being bombarded with stimuli. You may be consciously thinking about one specific thing, but you brain is processing thousands of subconscious ideas. The Gambler’s fallacy is the tendency to think that future probabilities are altered by past events, when in reality, they are not. Reactivity is the tendency of people to act or appear differently when they know that they are being observed. Pareidolia is when random images or sounds are perceived as significant. Interesting Fact: the Rorschach Inkblot test was developed to use pareidolia to tap into people’s mental states. Self-fulfilling Prophecy Self-fulfilling prophecy is engaging in behaviors that obtain results that confirm existing attitudes. Interesting Fact: Economic Recessions are self-fulfilling prophecies.

How We Can (Actually) Change The World – Pt. 2/3 Now that we’ve identified the problem, we can move on to the solution. But even before speaking of a specific solution, we must discuss the paradigm of change. How does change come about? Let’s begin with one of the basic principles of the world’s religions, philosophies, and the self-improvement plight: acceptance. The flip-side of acceptance is resistance. Now let’s bring our attention back (wink) to ways of inciting change… I was once asked why I don’t participate in anti-war demonstrations. Certainly the most time-tested means of shifting the status quo is through protest, eg. the Occupy Movement. Even movements successful in their goals like many Arab Spring uprisings and Spain’s protests in 2011 have failed to creating complete and sustained change. I’m not saying that positive change cannot be obtained through resistance. While I don’t think our solution lies in political protest or winning upcoming elections, I have just as little faith in peace rallies.

How do we achieve and appreciate success? Success is the topic of a thousand clichés, songs, and inspirational quotes; it’s conquering the proverbial mountain, or winning the proverbial foot race. It is elusive, yet we cling to the hope that, someday, we will acquire it. We not only pursue success, we crave it desperately as we climb the ladders and jump the hurdles that present themselves along our paths. The question is: How do we achieve and appreciate success? First, we must get a major misconception out of the way. The good news is that you are completely in control of that, and therefore in control of your success. The last and most important facet of success is that you will not achieve it alone. Surround yourself with people who share your passion, and they will share in your success, celebrating your victories with you.Tweet In the same way, they will pick you up when you feel overwhelmed. This all may seem rather wishy-washy, but isn’t that the whole idea of success? If you believe that you can succeed, you will.

Be The Change, Be The Hero Life is a dance Where we had the waltz in earlier times, a slow-paced and fixed dance we have dubstep in modern times, much faster and chaotic. In the same way the pace of life has gone up a notch or two aswell and life isn’t fixed anymore, it’s faster and more chaotic. Where once you could rarely visit another city, now the whole world is in your home with a click of the mouse. Increasing interconnectedness at an accelerating rate. Now, if life is a dance and for some reason (good ones I hope!) Having the right moves I strongly believe in practicality. This idea has been captured in the profound statement of Mahatma Gandhi; Be the change you want to see in this world. Every action is a vote I’d like to propose the following idea. If you buy a pair of nikes you vote for the existence of sweatshops. If the bank you’ve chosen invests in weapons, you vote for killing. The real use of your money If you buy McDonald’s you are actually ‘eating up the Amazon’. What do you vote for?

Altru-Hedonism: A New Perspective on Pleasure & Helping Others Altru-Hedonism is a mash-up of the terms altruism (selfless concern for the welfare of others) and hedonism (the pursuit of pleasure). Normally these terms are considered antonyms, which would make my made-up word a complete oxymoron. I aim to convince you of just the opposite. Note: For you smartasses out there, yes we all know that helping other people feels good. This post does eventually transcend common sense :) Altru-Hedonism can be summed up very well in a little memory exercise. WHAT? Altru-Hedonism (noun) - the act of maximizing one’s own pleasure by seeking to help others The key word in that definition is maximizing. But Charity is a Chore! Why does helping others have such a bad rap? You don’t need to make sacrifices or break a sweat to lend someone a hand. What about drugs, sex and nice things? Don’t get me wrong, those ‘vices’ all feel fantastic. Still Not Convinced? Next time you have an opportunity to help someone, try a simple cost-benefit analysis.

Get Anyone to Like You – Instantly – Guaranteed Get anyone to like you - Instantly - Guaranteed If you want people to like you, make them feel good about themselves. This golden rule of friendship works every time - guaranteed! The principle is straightforward. If I meet you and make you feel good about yourself, you will like me and seek every opportunity to see me again to reconstitute the same good feeling you felt the first time we met. The simple communication techniques that follow will help you keep the focus of the conversation on the person you are talking to and make them feel good about themselves. The Big Three Our brains continually scan the environment for friend or foe signals. Eyebrow Flash The eyebrow flash is a quick up and down movement of the eyebrows. Head Tilt The head tilt is a slight tilt of the head to one side or the other. Smile A smile sends the message "I like you." Empathic Statements Empathic statements keep the focus on the other person. Example 1 George : I've been really busy this week. Example 2 Flattery