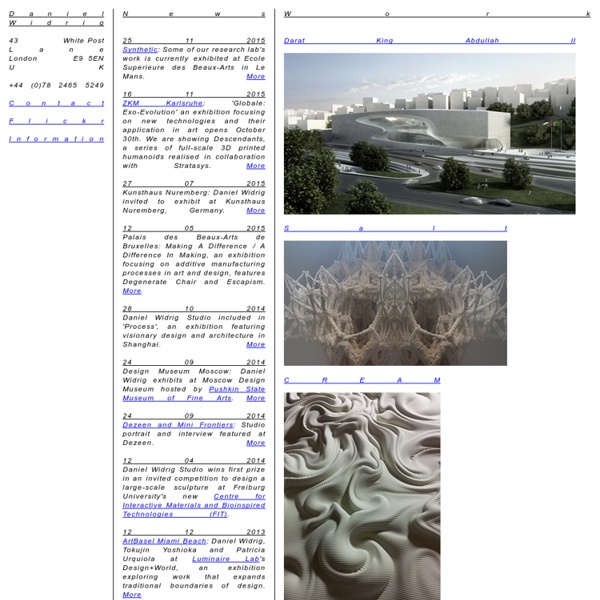 ezioblasetti We are the hackers of abstraction. We produce new concepts, new perceptions, new sensations, hacked out of raw data. Whatever we hack, be it programming language, poetic language, math or music, curves or colorings, we are the abstracters of new worlds. Whether we come to represent ourselves as researchers or authors, artists or biologists, chemists or musicians, philosophers or programmers, each of these subjectivities is but a fragment of a class still becoming, bit by bit, aware of itself as such. — A Hacker Manifesto by McKenzie Wark I spend much energy trying to realize situations and occurrences physically before I give in to digital effects. — Barney and Noé discuss River of Fundament PEOPLE: Robert Williams - Geometry + Mathematics we-designs: Robert Edward Williams (born 1942) is an American designer, mathematician, and architect. Now, poetry, as generous as its beauty may be, is indubitably an authoritarian form of declaration. — Badiou, ‘Plato, Our Dear Plato!’

projets paperhouse maison L branly guénot val de grâce pons + huot chaumont saint louis galvani pac villa moderne wolfsburg mainz chargey Fashion X Technology: Naim Josefi Blending minimalism with a touch of whimsy, Swedish designer Naim Josefi has broken new ground on the runway. Drawing comparisons to icons like Alexander McQueen, Josefi has already established himself as a name synonymous with incredible innovation. Back in 2012, Josefi won an opportunity to showcase his collection at Mercedes Benz Fashion Week as a winner on fashion design reality show Project Runway, and has continued to inspire and amaze. Exhibiting an innate ability to stay one step ahead of the careening fashion curve, Josefi isn't afraid of experimenting with new materials and technology. In sharp contrast to the soft textural interplay of his hand-jewelry, Josefi turned the fashion world on its heel with his debut of the first ever 3D-generated shoe, printed by Materialise. Josefi joined industrial designer Souzan Yusouf to create the Melonia heel; a structural feat of technology customized to fit your feet. Images courtesy of Materialise

Frank Ghery This morning, my friend Doug sent me the following pictures of the Marques de Riscal Hotel in Elciego, Spain designed by the genius Frank Ghery. One day I would like him to design a house for me. (Thanks Douglas for the link and pictures!) Fashion X Technology: Pierre Renaux A recent graduate from Antwerp’s esteemed Royal Academy of Fine Arts, Pierre Renaux has already amassed a transformative body of work. Renaux’s debut collection—also his Master's thesis—"Liquidation Totale" is a futuristic love letter to his fascination with the female body and its duality. The featured garments use synthetic materials such as neoprene and plastic to depict stylized states of distress, speaking to Renaux’s vision of powerful women amongst a state of ruin. The collection’s title is derived from the final decree of closure commonly etched on French storefronts. Renaux’s previous collections, "Mode Sans Echec" (Fashion Without Fail) and "Tout Doit Disparaitre" (Everything Must Disappear) round out "Liquidation Totale" as a triptych body of work. For his 2011 "Tout Doit Disparaitre" collection, Renaux paired with 3D data developers 4DDynamics to create digital body scans of his pieces. Images courtesy of Pierre Renaux and Materialise

Meet The Eyecatcher: A Wearable That Combines Art, Fashion And Technology The Eyecatcher is a wearable device launched by LookSee Labs as a Kickstarter campaign. Some of its ‘eye-catching’ features include a battery life that can last for a year, customizable bracelet design, and an always-on e-ink display.(Photo : Kickstarter) LookSee Labs attempts to combine the power of technology with a person's individual sense of fashion into a unique wearable device that promises to look good on anyone's wrist with its "eye-catching" design. Aptly called "Eyecatcher," the device is a brainchild of LookSee Labs, a startup company with headquarters located in Oakland, California. The wearable, which is touted for its smart and large display as well as longer than the usual battery life, is now launched in a campaign at Kickstarter. As of this writing, the campaign already earned support from 230 backers and raised almost $56,000 pledge amount out of the $75,000 goal. "We realized they were not interested in information," said Per Ljung, founder of LookSee Labs.