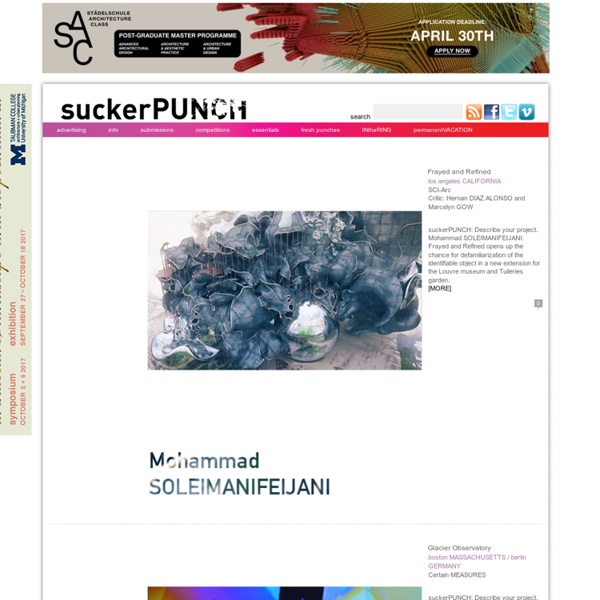 boston MASSACHUSETTS suckerPUNCH: Describe your project. Sophia X. CHANG: Suspense is a recent architectural installation at the INVIVIA Gallery in Cambridge, Massachusetts. Allen Sayegh (Co-founder of INVIVIA) and Ingeborg Rocker (Co-founder of Rocker-Lange Architects) curated and sponsored the installation, an unexpected fabric space that manipulates the architectural frame to blur the boundaries between inside and outside and piques the viewers’ awareness of their bodies in space.

Dig Deeper into the Scandal Globally, extreme poverty has been halved in 20 years, and could be virtually wiped out by 2030. But much of the progress that has been made is at risk – not because of natural disasters or new diseases, but because of something far more insidious. Analysis by the ONE Campaign suggests that at least $1 trillion is being taken out of developing countries each year through a web of corrupt activity that involves shady deals for natural resources, the use of anonymous shell companies, money laundering and illegal tax evasion. This is not international aid – which is making a tangible difference. Massive sums are being taken out of developing countries’ own economies, preventing them from financing their own fight against extreme poverty, disease and hunger.

Encountering Urbanization This week’s City Beautiful starts from a post on BLDG Blog about a forthcoming book, Short Stories: London in Two-and-a-Half Dimensions. Authors CJ Lim and Ed Liu create a new genre of “architectural fiction” where fantastical environments built in paper are inspired by actual sites in London meshed with stories ranging from the Three Little Pigs to Alice in Wonderland. This and the other works below tell stories of what is most durable – our built environment – using fragile, ephemeral paper. As a medium, 3D paper collage lends itself nicely not just to telling kid’s stories of the pop-up book variety, but the intricacies of cities, tales of how they change over time and even what they could be with a little imagination. Hong Kong

high line for london : me & sam high line for london | london parks library London benefits from over 1000 green spaces, from the Royal Parks to smaller greens and fields throughout the capital. These form a valuable resource for residents and visitors, offering respite from the city. Manifest destiny In the 19th century, Manifest Destiny was the widely held belief in the United States that American settlers were destined to expand throughout the continent. Historians have for the most part agreed that there are three basic themes to Manifest Destiny: The special virtues of the American people and their institutions;America's mission to redeem and remake the west in the image of agrarian America;An irresistible destiny to accomplish this essential duty.[1] Historian Frederick Merk says this concept was born out of "A sense of mission to redeem the Old World by high example [...] generated by the potentialities of a new earth for building a new heaven".[2] Merk concludes:

Transformable Street Furniture For The Homeless Street furniture is mostly used during the day and not used during the night, except by some homeless, who spend the night on the public benches in parks and on squares. RainCity Housing, a non-profit that provides specialized housing for people living with mental illness and addiction, has launched multi-functional street furniture that can be used as seating during the day and ‘comfortable’ sleeping places for the homeless at night time. The hospitable campaign for Vancouver’s homeless is developed in collaboration with Spring Advertising, and will be running for one month. The aim of RainCity Housing is to draw attention for the miserable conditions that the homeless in Vancouver have to sleep in, but also the lack of hospitality and compassion of society towards the homeless. Since many mental institutions have closed down in Vancouver more homeless are forced to live on the streets, and you can’t expect them to disappear, argues one of the initiators.

Contrail - About Contrail Contrail is a public art project that celebrates shared spaces, helps make bicycling safer and more fun. How to Use Contrail Contrail attaches to your bicycles and, as you ride, the device leaves a colorful trail behind you. Electric City 2012: graphic highlights from LSE's conference on the urban age Electric City, the 2012 edition of LSE Cities' conference series, takes place today and tomorrow at the London School of Economics and Deutsche Bank's Alfred Herrhausen Society. This year's event is focusing on the different ways in which urban societies across the globe are being influenced by technological and environmental change. You can watch a live video feed from the conference here. The conference publication includes a wealth of detailed graphics covering topics including transport, energy consumption, pollution and urban planning, as well as a visualisation-rich case study on London.

thehinge.net NEWS Hemler Von Sternof and the Blue House Photography Company Useful Emptiness -Public Art Installation - Ablany Bulb FEET - Public Art Sculpture - Don Beyer Kia, Alexandria VA Translated Geometries vol.2 Research Team: Efilena Baseta – Ece Tankal – Ramin Shambayati What our architecture may lack in a set style and goals is compensated in its ability to harness flows of energy and information in its various transitions. DIY Architecture: First WikiHouses Built - The Pop-Up City - Waterfox It was one year ago that we brought you news of WikiHouse, the innovative open-source concept for housebuilding from London-based design team 00:/ (zero zero). The idea is to bring house design and construction to the masses through open-source designs that use easy-to-assemble CNC cutouts from standard sheets of plywood. Anyone can contribute designs, download models (that can generate code for CNC cutting) and assemble the components with minimal training or skill. We’ve already seen IKEA dabble in urbanism. Imagine if they were to offer flat-packaged self-assembly houses — you would probably get something very much like a WikiHouse!

List of minimalist artists Minimalism was an art movement that began during the 1960s and this list of minimalist artists are primarily artists whose works were done in the 1960s; and are considered minimal. Although some artists subsequently radically changed their work in the 1970s and in subsequent decades. This list in incomplete. Among the artists to whom the term minimalist was originally applied are[edit] Among the other artists whose work might be regarded as related to minimalist art are[edit] The Podcast about African History, Culture, and Politics Hikabwa Decius Chipande (PhD 2015 Michigan State) on the political and social history of football (soccer) in Zambia. He discusses becoming an historian; the game’s relationship with British colonizers, the copper mines, and postcolonial governments; and the archival research and oral interviewing process. Chipande concludes with insights from his extensive experience with sport development in Africa. Boycotting South African goods, San Francisco, 1962. Used by permission of ILWU.

Sisters are Building it for Themselves: How the Victoria Mxenge women changed the housing game Figures recently released by the City of Cape Town show that the number of shack fires which occurred in the Western Cape in 2014 reached just under 8,000, almost double the previous year’s 4,832. At least 20 people died in these fires, with countless others left homeless. Those numbers are a reminder of how perilous shack living can be, as well as testament to the housing backlog in a rapidly-expanding city.