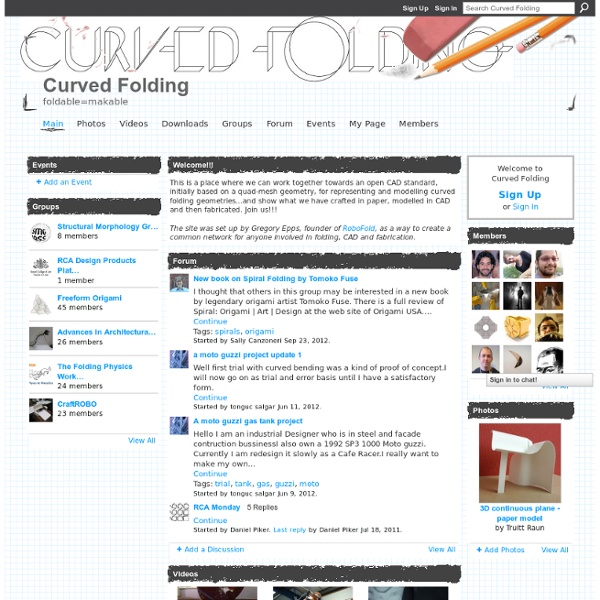 Research Projects TT's Page Top Tomohiro TACHI Composite Rigid-Foldable Curved Origami Structure In this study, we show a family of multilayered rigid-foldable and flat-foldable vault structures, which can be designed by constructing rigid-foldable curved folded tubular arches and assembling the arches to construct cellular structures. Tomohiro Tachi, "Composite Rigid-Foldable Curved Origami Structure", in Proceedings of Transformables 2013, Seville, Spain, September 18-20, 2013. Elastic Origami In this research, we propose a novel computational method to simulate and design origami whose form is governed by the equilibrium of forces from the elastic bending of each panel. Tomohiro Tachi, "Interactive Form-Finding of Elastic Origami", in Proceedings of IASS 2013, Wroclaw, Poland, September 23-27, 2013. Freeform Origami Tessellations based on Generalized Resch's Patterns In this research, we study a method to produce families of origami tessellations from given polyhedral surfaces. Freeform Tensegrity

transframing How to write a research paper Writing is easy. All you do is stare at a blank sheet of paper until drops of blood form on your forehead. --- Gene Fowler A major goal of this course is the development of effective technical writing skills. To help you become an accomplished writer, you will prepare several research papers based upon the studies completed in lab. Written and oral communications skills are probably the most universal qualities sought by graduate and professional schools as well as by employers. Resources for learning technical writing Before you begin your first writing assignment, please consult all of the following resources, in order to gain the most benefit from the experience. As you polish up your writing skills please make use of the following resources Instructor feedback on previous assignments Common errors in student research papers Selected writing rules (somewhat less serious than the other resources) General form of a research paper General style To make a paper readable Mistakes to avoid Style

Origami Science: origami-like techniques used in advanced tecnologies. You will be surprised to know that paper folding ideas are used in technically advanced science projects. Some projects use bona fide origami folding techniques in the their work. However, in some cases, the term "origami" is used even when their is minimal folding involved. Origami-Inspired Deployable Solar Array As we approach 2014, we revisit the 50-year-old space problem of transporting large-objects in narrow-rockets. Here comes origami to the rescue. Researchers at Brigham Young University, National Science Foundation, NASA's Jet Propulsion Laboratory, and origami expert Robert Lang designed a space array which can be folded compactly and then deployed while in outer space. Not so fast. This solar array is similar to the origami Flasher by Jeremy Shafer but it's not the first time that origami has been used in space technology. Foldable Paper Lithium-Ion Battery Easy to read article here or abstract ACS Publications. How is this going to help us in the future? Origami DNA Nanorobot

aThematics LAPACK — Linear Algebra PACKage LAPACK is written in Fortran 90 and provides routines for solving systems of simultaneous linear equations, least-squares solutions of linear systems of equations, eigenvalue problems, and singular value problems. The associated matrix factorizations (LU, Cholesky, QR, SVD, Schur, generalized Schur) are also provided, as are related computations such as reordering of the Schur factorizations and estimating condition numbers. Dense and banded matrices are handled, but not general sparse matrices. The original goal of the LAPACK project was to make the widely used EISPACK and LINPACK libraries run efficiently on shared-memory vector and parallel processors. LAPACK routines are written so that as much as possible of the computation is performed by calls to the Basic Linear Algebra Subprograms (BLAS). Highly efficient machine-specific implementations of the BLAS are available for many modern high-performance computers. Acknowledgments:

s Best Photos of yaleschoolofarchitecture Flickr Hive Mind is a search engine as well as an experiment in the power of Folksonomies. All thumbnail images come directly from Flickr, none are stored on Flickr Hive Mind. These photos are bound by the copyright and license of their owners, the thumbnail links take to you to the photos (as well as their copyright and license details) within Flickr. Because some other search engines (Google, etc.) index parts of Flickr Hive Mind, you may have been led here from one of them. Flickr Hive Mind is a data mining tool for the Flickr photography database, allowing search by: tags(keywords); Flickr photography groups; Flickr users, their contacts, and favorites; free text; the Flickr Explore algorithm for interestingness.

grasshopper « On April 3-4, I had the pleasure of co-teaching a computational design and fabrication workshop together with Gonçalo Castro Enriques (X-REF) at the Faculty of Architecture of the University of Porto (FAUP), Portugal. The 2-day workshop, titled “Performative Morphologies“, was