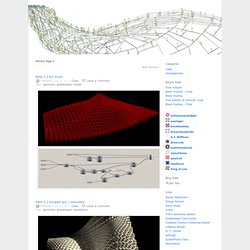 J6 - Origami Tessellation + I have debated with myself and friends over the legitimacy and practice of parametric design with "good" architecture. 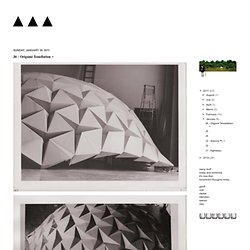 The technology and method is still primitive, in my opinion, but some great (looking) work has come out from it. On one side, I see the use of tools as purely experimental and superficial--powerful and visually compelling, but lacking in critical depth and ability to create a real human space. Star Twist Tessellation v2.1. I updated and cleaned up my crease pattern for the Star Twist Tessellation v2.1, and posted it to my diagrams page. 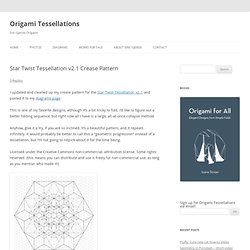 This is one of my favorite designs, although it’s a bit tricky to fold. Paper Folding – Origami Tessellation « arkinet. This morning we found, through a tweet from our friend @digitag the work of Ron Resch, a visionary mathematician and designer who was one of first to explore the architectural potential of 3D tessellated structures in the 1960’s and 70’s. 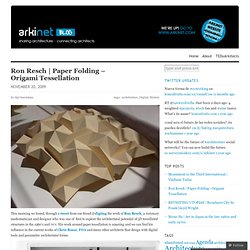 His work around paper tessellation is amazing and we can find his influence in the current works of Chris Bosse, FOA and many other architects that design with digital tools and parametric architectural forms. Resch writes about his own “training”: “I went to the University of Iowa, Iowa City on a scholarship for my sculpture. I did 4 years undergraduate and 4 years graduate work in the Art Department; graduating with a MFA in art and design in 1966.

“The Ron Resch Paper and Stick Film” is my thesis submission. Along the way I have done a number of art shows, and museum exhibitions, and intend to do some more. — I think this qualifies me as “trained in art”. Www.origamitessellations.com/docs/Tessellation_Basics_Eric_Gjerde.pdf. Index. Tony Robbin's Art Page. Art. Art We design and build works of art created by artist Tony Robbin. 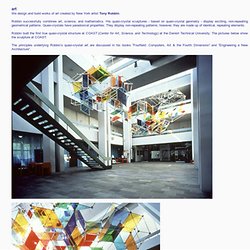 Robbin successfully combines art, science, and mathematics. His quasi-crystal sculptures - based on quasi-crystal geometry - display exciting, non-repeating geometrical patterns. Quasi-crystals have paradoxical properties: They display non-repeating patterns; however, they are made up of identical, repeating elements. Robbin built the first true quasi-crystal structure at COAST (Center for Art, Science, and Technology) at the . The principles underlying Robbin’s quasi-crystal art are discussed in his books “Fourfield: Computers, Art & the Fourth Dimension” and “Engineering a New Architecture”. Art, photographs, and copyright: Tony Robbin. AAC : Selected Student Reports. 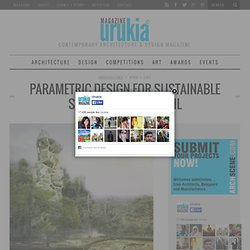 This Parametric Green design for Sustainable skyscraper designed by the team: Patrick Bedarf, Tomas Kozelsky & Dimitrie Stefanescu, for the Evolo 2011 competition. Their main goal was to push parametric design techniques as much as possible into an as experimental direction as they could allow. Located in Coari, Brazil, at the heart of the Amazon forest, this conceptual tower would be constructed in several phases. The idea of the skyscraper is to create a sustainable skyscraper that allows tourists to explore the Amazon forest while creating global awareness of its alarming destruction rate. 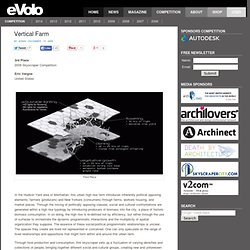 Through the mixing of politically opposing classes, social and cultural confrontations are generated within a high rise typology by introducing producers of biomass into the city, a place of historic biomass consumption. In so doing, the high rise is re-defined not by efficiency, but rather through the use of surfaces to orchestrate the dynamic programmatic interactions and the multiplicity of spatial organization they suppose. In this urban high rise farm, the romanticizing of modern food production or utopian garden city additions is rejected. Board - 1 Board - 2. Capital Gate: Parametric Design Results in Worlds Steepest Leaning Building.

Capital Gate is a new building forming the entrance to Capital Centre, a major development project in Abu Dhabi and is designed by RMJM Architects. 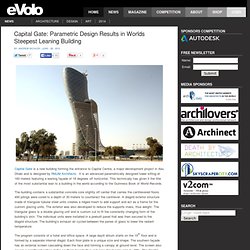 It is an advanced parametrically designed tower sitting at 160 meters featuring a leaning façade of 18 degrees off horizontal. This technically has given it the title of the most substantial lean to a building in the world according to the Guinness Book of World Records. The building contains a substantial concrete core slightly off center that carries the cantilevered floors. 490 pilings were cored to a depth of 30 meters to counteract the cantilever. A diagrid exterior structure made of triangular tubular steel units creates a ridged mesh to add support and act as a frame for the custom glazing units.

The exterior was also developed to reduce the supports mass, thus weight. The program consists of a hotel and office space.