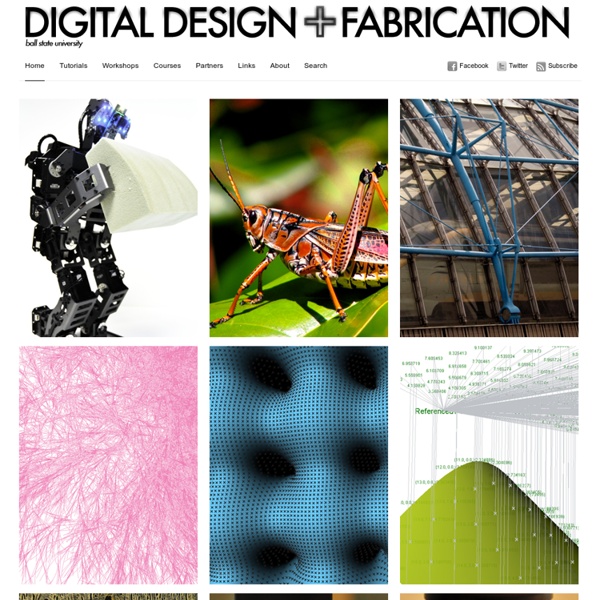 090711-parametric bridge – Thesis Final project- « eSCRIPT-O Some images from my final project for my master degree thesis. its a parametric bridge with a parametric skin – (hexatect). All the project it´s defined by scripting (rhinoscript) and some specific grasshopper definitions (vb.net) . I finally presented my thesis (to get the architect title and a master degree (2×1 super combo, hahaha) last month, and i got the maximum calification ( 7.0 out of 7.0!!!). im still celebrating , so when the celebration stops, i will post my thesis in PDF and the most important rhinoscript tools that i wrote for the projects.

Grasshopper (Explicit History) Same Area Voronoi using Galapagos I have been quite fascinated by the recent development of Galapagos for Grasshopper. This is a simple example of its application set up to solve for a 10-point voronoi division within a user-defined boundary where all the parts are divided as equally as possible in terms of their areas. Owen Architects - Online Professional Portfolio Southern facade of a project using a mechanical iris system for light regulation. Prefabricated Mechanical Iris panels. We have included the files you will need to create your own mechanical iris. We used 5mm plexiglass for the body and .5mm sheets for the bleades (make sure the material you use for the blades is thin enough to fit between the outer body which will be determined by the material thickness that you buy).

Computational Design Sandbox On April 3-4, I had the pleasure of co-teaching a computational design and fabrication workshop together with Gonçalo Castro Enriques (X-REF) at the Faculty of Architecture of the University of Porto (FAUP), Portugal. The 2-day workshop, titled “Performative Morphologies“, was design playgrounds Posts Tagged ‘Parametric Architecture’ We are happy and excited to announce that finally after a long time we have a launch day for ThinkParametric. Hy-FI is the winning proposal for this year MoMA´s PS1 competition, a tower-like topology volume composed by compostable bricks that use corn stalks and mushroom roots in their process of elaboration. In this tutorial you will learn how can you create shell-like surfaces made of planar hexagons using Kangaroo´s Planrization Forces. The Centenial Chromagraph is an installation/ data visualization portraying the history of the University of Minnesota School of Architecture.Their creators refer to it as an exercise in data spatialization where the use of computational tools were employed to generate formal and spatial constructions with large quantities of data.

Waterbomb Tessellation and Beyond It all started with the platonic passion on origami tessellations, not much of the origami, but the tessellation part, as I didn’t want to fold it physically, nor model them using a physical engine such as Kangaroo. That would also be very unnecessary (and yes, very boring) to simulate a folding effort on computer unless we lose our connection with the real world. Instead, I tried to look at a much abstract, silly and basic part of it; the creasing patterns. Inorganic Speciation Inorganic Speciation by Iain Maxwell + Dave Pigram (supermanoueuvre) Form is the primary instrument through which architecture engages with the world. It is this firmly held position that motivates supermanoeuvre to develop custom methodologies of formation that allow for the explicit and open-ended negotiation between multiple architectural intentions and the complex milieux within which they will operate. These methodologies are algorithmic in nature, primarily digitally enacted, and extend the capacities of the form-finding tradition within architecture through a decoupling of its processes from the limits of physics, enabling a broader examination of the number and nature of negotiable inputs. The abstract notation underlying these algorithms enables a meta-analysis of the formational processes, which has an accelerating influence on their evolution, as experienced within other fields of intellectual and artistic endeavour. -Source

Unrolling Surfaces in Grasshopper This Grasshopper definition is proof of concept for a VB component that unrolls developable surfaces to the XY plane. To make the component, I’ve adapted a rhinoscript by Andrew Kudless (of Matsys) to run in VB, enlisting the help of CCA student Ripon DeLeon to write the code.This example uses the VB component to create unrolled surfaces from 4 curves that I have distorted using the cage edit command in rhino. To use the definition on your own projects, simply choose any 4 curves to loft between in sequential order. The blocks of components are grouped somewhat clearly (I hope) so you can add more curves by copy-pasting more blocks and making the few required re-connections to make it work. Please feel free to contact me with any questions.

no boxes! Fritz Obermeyer’s Jenn is a nicely crafted java application that allows a playful examination of structures in non-Euclidian space, more specifically Coxeter polytopes in stereographic projection. These complex geometric structures are the 4-dimensional Sisters to the polyhedra and have, what seems like, recursive interiors and packing formations that resemble bubbles in foam. The applet allows you to fly through these structures and orient the camera view according to your whims; other controls include toggles for the kind of rendering display settings. Perhaps I shouldn’t report it, but there are also some nice rendering glitches on some of the selected models on certain views.

architecture These are a series of experiments, in which the designer try to use parametric and digital method to realize these interesting optical illusion effects and generate 3d geometry or space rather than just 2d painting. Continue reading The design task of this project was to design a multifunctional theatre inside an old gasholder in the Hague the Netherlands. In the a new developed masterplan he Gasholder is placed in a small lake surrounded by different thematic islands. The location of these islands are not fixed an can move dynamically around the theatre.