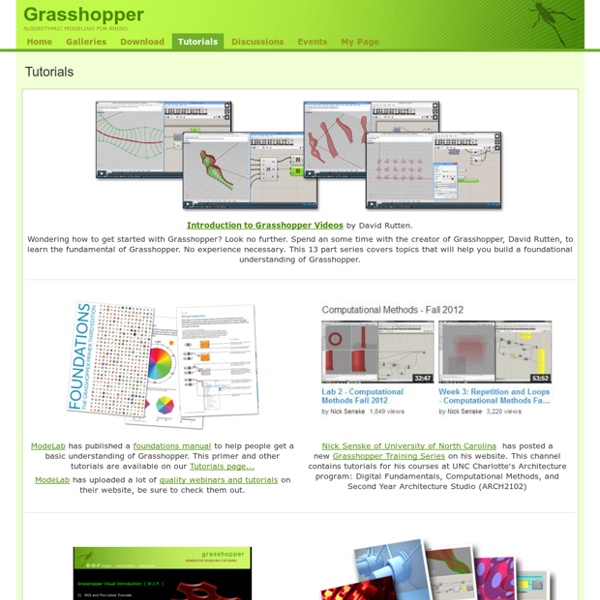 Introduction to Grasshopper Videos by David Rutten. Wondering how to get started with Grasshopper? Look no further. Spend an some time with the creator of Grasshopper, David Rutten, to learn the fundamental of Grasshopper. No experience necessary. This 13 part series covers topics that will help you build a foundational understanding of Grasshopper. Dario Donato director di SpatialConnection(s), incubatore di ricerca per una creatività matematica, ha il piacere di annunciare il libro: Contaminazioni creative digitali – Trascrizioni di una complessità algoritmica attraverso Rhino.Grasshopper Transcripts of a complexity algorithmic through Rhino and Grasshopper. If you’re looking for a nice collection of Grasshopper tutorials then jump over to Designalyze Here are a series of beginner and advanced tutorials from our friends at Studio Mode... This tutorial series was developed for the Design Studio AIR at the University of Melbourne, Faculty of Architecture, Building and Planning.

RHINO: GRASSHOPPER DEFINITIONS - RHINO / GH This definition was developed for my final thesis project to generate a louver system based on functional requirements within the building. The performance was then tested in Ecotect. A large part of my thesis design involved invertible arena seating with many moving parts. Streaming Grasshopper Points into a Revit Conceptual Mass Below is a basic example of streaming a list of XYZ coordinates from Grasshopper into a *csv file and then using that file to create reference points in a Revit conceptual mass... A custom script was written using the Revit API to read the CSV file and make the points. Here is the Revit API code (in VB.NET) for reading the *.csv file : Dim XYZfile As String = "insert file path here" If File.Exists(XYZfile) Then Dim FileReadXYZ As New StreamReader(XYZfile)

grasshopper code . a collection of codes & grammars for Grasshopper, a generative modeling tool for Rhinoceros. 3D Hilbert Curve This definition generates a 3D Hilbert Curve, a continuous fractal space-filling curve. 3D_Hilbert_Curve_Co-de-iT_1.0007.zip Algorithmic Design with Grasshopper Takeaways: What's an algorithm and how do I define one?Isn't Grasshopper already a "Graphical Algorithm Editor"? How is an Algorithmic Design different from Parametric Design?What is the difference between incremental versus all-at-once execution? Grasshopper Modules - Proxy Wiki From Phylogenesis, FOA 2003 The following Grasshopper modules were created in consultation with FOA's Phylogenesis, in particular the taxonomy of forms found at the conclusion of the book. Grasshopper is an exciting and evolving modeling platform - the following examples attempt to develop a range of geometric examples to explore its form-making potentials. Andrew Payne, a GSAPP alum, has created a comprehensive primer on Grasshopper that can be found here. You should have this handy for reference. Helpful Modules

Grasshopper « Geometricmind This grasshopper definition is to create a Hyperbolic tower with helix partition. 01 concept There are two features in this definition, first one is to use ‘function’ component to create geometry. The concept is explained in the image above. Basically, there are doughnut like floors through the whole tower, each has the same area. This was enabled by ‘function 2′ component that inputs are the area of the outer circles and the floor area you want. Grasshopper Primer This primer, titled Foundations, introduces you to the fundamental concepts and essential skill-building workflows to effectively use Grasshopper. Foundations is the first volume in a forthcoming collection of Grasshopper primers. This first volume tracks through an introduction to the Grasshopper user interface, the anatomy of a Grasshopper definition, and three chapters dealing with parametric concepts and case study examples. An appendix closes out this volume, providing you with resources for continued exploration. Current translations of the primer include:

Marilyn Jordan Taylor, Dean and Paley Professor Academic Year 2011 - 2012 GOALS, PRIORITIES, AND INITIATIVESSeptember 7, 2011 I'm very pleased to take this opportunity to set forth the goals and initiatives for the School of Design in the academic year 2011-2012. In doing so, I hope to engage each and every one of you--students, staff, alumni, faculty, university colleagues, overseers, trustees, and friends--in achieving our extraordinary potential. We are a community of scholars and professionals who together can illustrate and communicate that design--encompassing the fine arts, historic preservation, urban and regional planning, urban design, landscape architecture, and architecture--can create value and make a difference in the lives of people in communities large and small, growing and shrinking, advantaged and disadvantaged, around the world.

Animate Sketching of a Parametric Truss Previous studies on the timer component were based on understanding it’s use. This time, I tried to implement it in a geometric design task. Moreover, manipulating timer component to change the regular animation of parameters. Time does not have to be equally divided sequences. Rather, new possibilities may be emerged with different time flows. A simple triangulation system is developed with a potential manipulation, based on a timer.