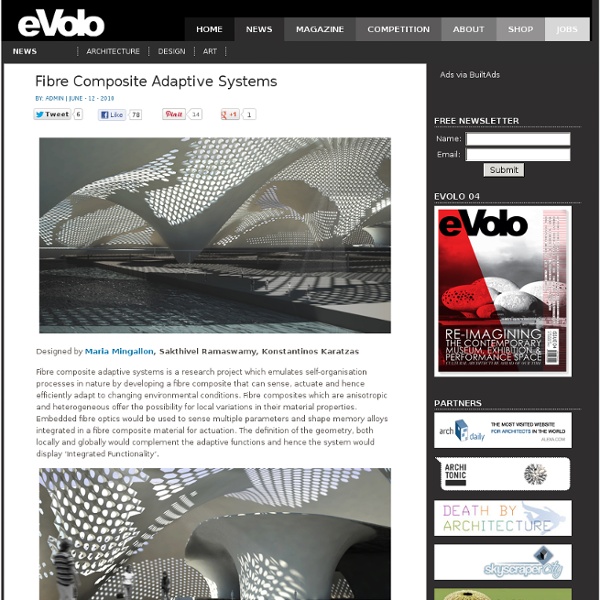 Designed by Maria Mingallon, Sakthivel Ramaswamy, Konstantinos Karatzas Fibre composite adaptive systems is a research project which emulates self-organisation processes in nature by developing a fibre composite that can sense, actuate and hence efficiently adapt to changing environmental conditions. Fibre composites which are anisotropic and heterogeneous offer the possibility for local variations in their material properties. Embedded fibre optics would be used to sense multiple parameters and shape memory alloys integrated in a fibre composite material for actuation. The definition of the geometry, both locally and globally would complement the adaptive functions and hence the system would display ’Integrated Functionality’. ‘Thigmo-morphogenesis’ refers to the changes in shape, structure and material properties of biological organisms that are produced in response to transient changes in environmental conditions. -> EVOLO SKYSCRAPERS 2 - Limited Edition Book

architecture These are a series of experiments, in which the designer try to use parametric and digital method to realize these interesting optical illusion effects and generate 3d geometry or space rather than just 2d painting. Continue reading The design task of this project was to design a multifunctional theatre inside an old gasholder in the Hague the Netherlands. In the a new developed masterplan he Gasholder is placed in a small lake surrounded by different thematic islands.

Geode los angeles CALIFORNIA SCI-Arc, ESTm Studio Spring 2012 critic: Marcelo SPINA suckerPUNCH: Describe your project. Steve MOODY: Two separate piles are scripted—one for the exterior that creates overall form and orientation, and one for the interior, accounting for circulation and the two main concert halls—and then intersected with each other. Discrepancies and misalignments between the two intersecting piles create cracks that form continuity between the two aggregations. grasshopper code . a collection of codes & grammars for Grasshopper, a generative modeling tool for Rhinoceros. Clusterizer This definition groups indexes of connected points into separate clusters. It requires Sandbox & Anemone plugins.

Safavid Surfaces and Parametricism The development of specialized treatments of concrete and glass, customization through digital fabrication, and parametric design tools have brought about a contemporary resurgence of surface articulation, reopening the general issue of surface composition as a “legitimate” aspect of design, after almost a century of (near) omission by modernism. A wide variety of firms, among them Zaha Hadid (Patrik Schumacher), Herzog and de Meuron, Weil Arets, Aranda\Lasch and Foreign Office Architects, have been reintroducing this aspect of design -- most notably the last, which in addition to built work, Farshid Mousavi’s The Function of Ornament includes surface articulation as part of its theoretical explorations. The surface articulations to be discussed are: 1) the ceiling of the dome, and 2) the corner, where the square of the floor plan is reconciled with the circle of the base of the dome. The Ceiling Overall ceiling pattern breakdown Ceiling "pod" comparson

Realitme Flowing Isosurface Definition I know I haven’t properly updated the Nudibranch examples on the GH forum, however since I have been getting a lot of requests to display what and how exactly this isosurface snapshot from the previous post about the release of Nudibranch works, i decided to spent a few hours to document this process and also share the definition. Take a look at the following video. This definition uses two Nudibranch components the Satellites and the AttractorValues, combined with the Millipede’s isosurface component. Three or more satellite entities create a 3d non-uniformal field of values from 0.00 to 0.5 these values are fed to the isosurface component and Voila!!. Archive » Waffle Structures: Rhino Grasshopper Yes ! the classic waffle structures , I think this kind of definitions are very useful specially to those starting in their way of parametric design and of course Grasshopper, they have a wide range of applications that can go from architectural projects to conceptual furniture like this quick example I made. The definition is made so you can set up the number of sections in the X and Y axis separately , also you can set up the height of each sections as well as the thickness of the material you are going to work with.

Parametric Wood 3D Laths This is an update that will generate 3 dimensional laths for rendering purposes. Work Credit by percentage: Daniel: 60% Jason: 25%