How to be creative 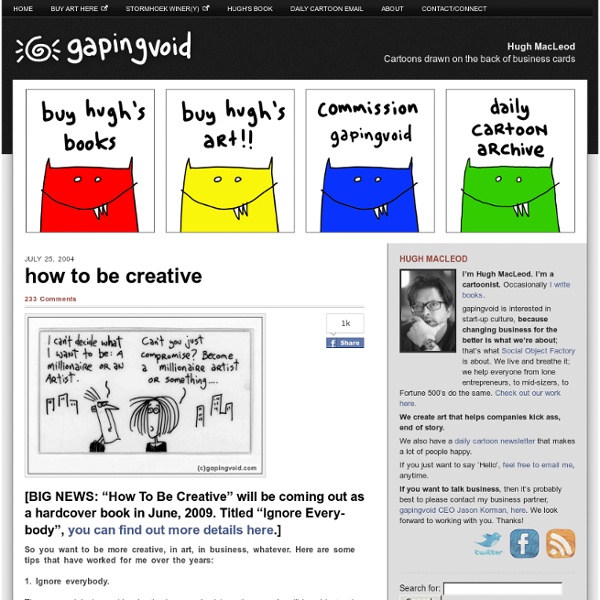 Abstraction Abstraction is a process by which concepts are derived from the usage and classification of literal ("real" or "concrete") concepts, first principles, or other methods. "An abstraction" is the product of this process—a concept that acts as a super-categorical noun for all subordinate concepts, and connects any related concepts as a group, field, or category.[1] Abstractions may be formed by reducing the information content of a concept or an observable phenomenon, typically to retain only information which is relevant for a particular purpose. For example, abstracting a leather soccer ball to the more general idea of a ball retains only the information on general ball attributes and behavior, eliminating the other characteristics of that particular ball.[1] Origins[edit] Thinking in abstractions is considered[by whom?] Abstraction involves induction of ideas or the synthesis of particular facts into one general theory about something. Thought process[edit] Cat on Mat (picture 1)

How to Build Self-Discipline Discipline is freedom. You may disagree with this statement, and if you do you are certainly not alone. For many people discipline is a dirty word that is equated with the absence of freedom. In fact the opposite is true. As Stephen R. Self-discipline involves acting according to what you think instead of how you feel in the moment. Work on an idea or project after the initial rush of enthusiasm has faded awayGo to the gym when all you want to do is lie on the couch and watch TVWake early to work on yourselfSay “no” when tempted to break your dietOnly check your email a few of times per day at particular times In the past self-discipline has been a weakness of mine, and as a result today I find myself lacking the ability to do a number of things which I would like – e.g. to play the guitar. If you struggle with self-discipline, the good news is that it can be developed. 1. Discipline means behaving according to what you have decided is best, regardless of how you feel in the moment. 2.

ingenova 10 Thirty-Day Challenges That Nobody Wants to Take A week ago I asked my friends on Facebook about the craziest thirty-day challenges, and I got quite a few interesting ideas. I’m posting them here today, along with my own contributions. These are all challenges that you won’t usually think about, yet some of them can be very powerful. I personally want to try some in the near future. If you want to give them a shot as well, I’d love to hear about your experience, and I’d offer you a spot here to share it if you don’t have a blog. Enough talk for now, below are 10 thirty-day challenges that nobody wants to take: No smoking, coffee or alcohol. What do you think of these challenges?