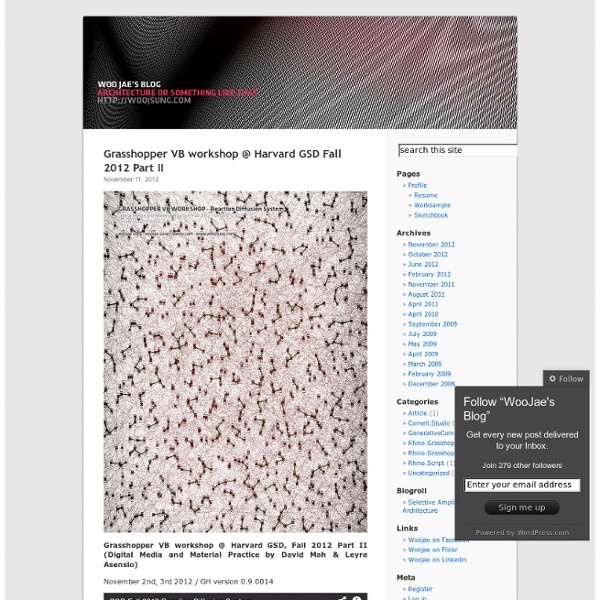 reformelb: tower morphology applied to avoid the problems associated with highly internalised buildings, a grasshopper algorithm has been developed to define a series of variables that as a combined system determine the permeability and porosity of each building. the levels of permeability can then be balanced with required lettable floor areas to determine ratios between private, semi private and public space. altering these ratios then thus not only affect the phenomenological aspects of each space (eg. emotive affections based on lux levels or optimal ventilation) but also the economics of each building. site plan with rentable vs public spatial ratios type1 grasshopper algorithm onto tower building inner circulation and curved slabs applied tower morphology diagrams podium grain size iterations

un didi | while ( 1 ) run ( ); The Geometry of Bending 2011-06-26 We looked at the paper entitled 'Linking Hanging Chain Models to Fabrication' by Axel Kilian as a source of information and inspiration to carry out our next experiment. The next experiment mainly had to focus on utilizing digital form finding methods to add to our methods for producing the next prototype. Axel Kilian, Ph.D. Fabrication output is an integral part of the iterative process and not a post design process. The relationship between form finding model and the translation into volumetric form was explored in a series of small models. His Motivation : Equilibrium solutions can be scaled if the proportional distribution of mass is kept and the geometry of the lines of forces is scaled proportionally. A major disadvantage is that a physical model is hard to measure accurately and in reasonable time, as measuring requires physically accessing the model. measurement of forces within the strings of the model is even more difficult, as it disturb the model. model in one given state

UbuWeb New Fabrications for Architecture The Euclid robot and Ron 2.0 make their first 3D printed object. This was just a simple test print on the Euclid robot now that it is fully up and running, but it came out better than I was expecting. This whole layer based printing business is pretty easy. The details: It is printed with ABS plastic,size is 12 inches tall and 5x5 inches in plan. Because Ron 2.0 is such a huge plastic extruder the ‘line weight’ is very wide; that coupled with the speed that the robot was moving makes for a very thick walled structure. So much so that I can stand on this thing, both upright and on its side.

Grasshopper Posts Tagged ‘grasshopper’ Force Based Design Karamba was recently taught and utilized by Christian Heidenreich, Alexander Stahr and participants at the Bauhaus Summer School Workshop ‘Force Based Design’. This two-week interdisciplinary course aimed to lay the foundations of a „force based design“ through theoretical input lectures and presentations. Varying examples showed that the efficiency of structures depends largely on the flow […] Shell And Beam Shell and beam elements are combined into a single karamba model showing how an integrated shell and beam structure can be analysed. Shape Optimization VII – Tower Mesh Like the Shape Optimization with Galapagos III example, a tower made up of shell elements with horizontal loads and variable diameter along its height is optimized for minimum deflection using Galapagos.The image shows material utilization plus force flow lines. Shell – Disc with Hole Force flow lines in disc with hole in the middle and utilization of shell material.