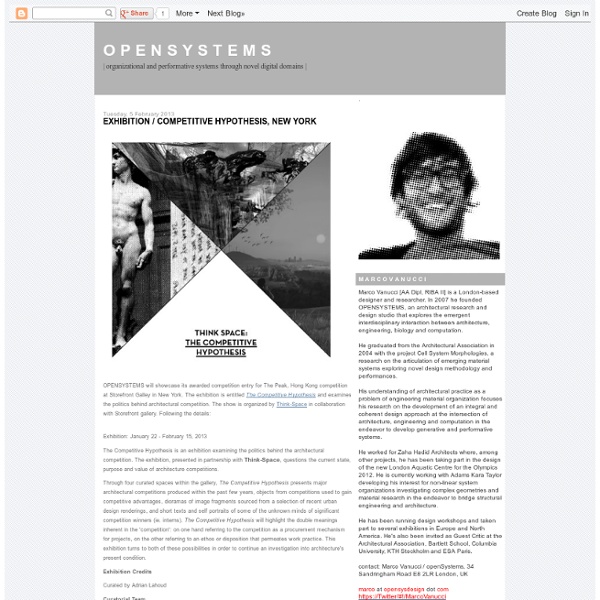 design playgrounds Posts Tagged ‘Parametric Architecture’ We are happy and excited to announce that finally after a long time we have a launch day for ThinkParametric. Hy-FI is the winning proposal for this year MoMA´s PS1 competition, a tower-like topology volume composed by compostable bricks that use corn stalks and mushroom roots in their process of elaboration. In this tutorial you will learn how can you create shell-like surfaces made of planar hexagons using Kangaroo´s Planrization Forces. The Centenial Chromagraph is an installation/ data visualization portraying the history of the University of Minnesota School of Architecture.Their creators refer to it as an exercise in data spatialization where the use of computational tools were employed to generate formal and spatial constructions with large quantities of data. Pudelma is a pavilion inspired by the traditions of Finnish wood-working and created as part of the European Capital of Culture Program.

ARTC PET_LAB — open source design research laboratory After a semester of intense work the students of Marc Fornes’, Stephan Henrich’s and Francois Roche’s (n)certainties studio presented their final work today at usc. The studio opened a new territory for usc by venturing deeply into a speculative realm of materiality, technology and ultimately architecture. Subversively leaving the bounds of what at usc is called a ‘comprehensive building design’, the studio allowed for the in depth investigation of designs schemes on the level of proto architecture. Forays into materials and conceptual designs of robots provided the pre text for developing liberating narratives for speculations on architectural fictions. These were developed and presented through highly suggestive drawings, that on the one hand where indulging and seductively beautiful; and on the other as Cedric Prize would say became ‘an integral part of the architecture they portray rather than a cypher for thoughts translated elsewhere, and by other means.’

no boxes! Fritz Obermeyer’s Jenn is a nicely crafted java application that allows a playful examination of structures in non-Euclidian space, more specifically Coxeter polytopes in stereographic projection. These complex geometric structures are the 4-dimensional Sisters to the polyhedra and have, what seems like, recursive interiors and packing formations that resemble bubbles in foam. The applet allows you to fly through these structures and orient the camera view according to your whims; other controls include toggles for the kind of rendering display settings. Perhaps I shouldn’t report it, but there are also some nice rendering glitches on some of the selected models on certain views. The word ‘polytope’ was introduced by Alicia Boole Stott , the daughter of logician George Boole. You might experience a feeling of non-Euclidean déjà vous while roaming around Jenns polytope space , the experience of space is a lot like being in one of Escher’s drawings.

Iteration in Grasshopper (Without scripting) « Heumann Design/Tech Lately I have been experimenting with iteration in Grasshopper. Iteration is often thought to be synonymous with the computer programming concept of a loop, but while the concepts are related, the definition of iteration I will use requires that the results of one iteration are used as the starting point for the next iteration. A loop can simply be a way to apply the same operation to a list of elements (much like processing multiple values with a component in grasshopper), but it is an iterative loop if the results from one step are used in the calculation of the next step (something grasshopper does not directly do.) This concept is also tightly linked with the concept of recursion. Simply stated, the definition of a recursive function includes the function itself. Achieving either iteration or recursion in Grasshopper would seem to require the use of scripting. What use would iteration be in Grasshopper? Example 3: Repeat Transform Example 4: Sierpinski Triangle Like this:

Parametric Artists | codedchromics I hadn’t heard about this before but fist (whoops, mean first) saw this earlier this month mentioned on Syuzi Pakhchyan’s blog Wearable Technology (always an inspiration!) Sophie de Oliveira Barata offers a ‘real’ option ‘surreal’ option and an ‘unreal’ option – you’ve just got to love that! Here are some of the incredible decorated and unusual prosthetics from The Alternative Limb Project - “The Alternative Limb Project offers a personal and friendly bespoke service, which provides unique prosthetics to blend in with the body or stand out as a unique piece of art, reflecting the wearer’s imagination, personality and interests. We will involve the wearer in all stages of the process from conception of ideas to the final work. Read more about what they are doing here Like this: Like Loading...