Rese arch Grasshopper® sessions. The Environmental sessions cover the practical use of Grasshopper®. 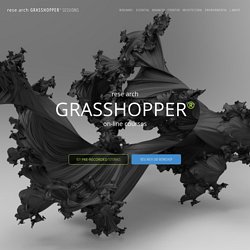 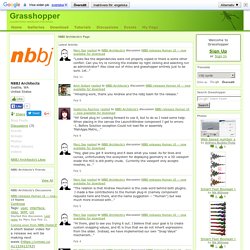 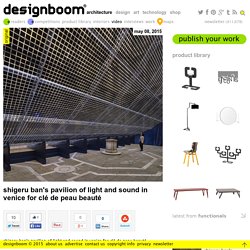 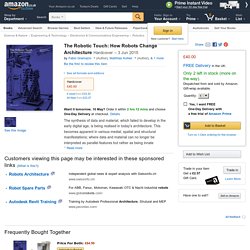 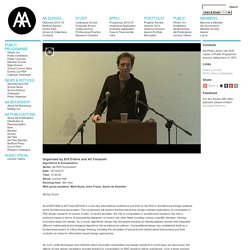 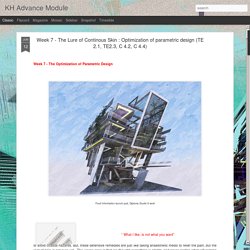 My work always related to speed and motion; but how far can I go? This research is to clarify the personal style doesn't meet everyone needs. In order to justify parametric design, indeed I am standing a wire along two cliff; maintain the balance and not to bias on one side. Astana Facade optimisation.mov. Parametric design for better buildings. + Parametric design is particularly useful for complex high-rise buildings in highly seismic regions like China. 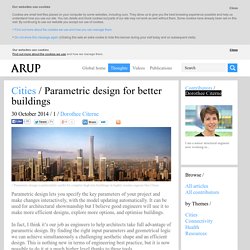 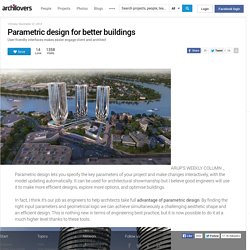 It can be used for architectural showmanship but I believe good engineers will use it to make more efficient designs, explore more options, and optimise buildings. In fact, I think it’s our job as engineers to help architects take full advantage of parametric design. By finding the right input parameters and geometrical logic we can achieve simultaneously a challenging aesthetic shape and an efficient design. This is nothing new in terms of engineering best practice, but it is now possible to do it at a much higher level thanks to these tools.

Swarm Intelligence V : Construction Optimisation. Tutorials. There is no promise that you are an expert in optimization after working through our Rhino and Grasshopper tutorials. 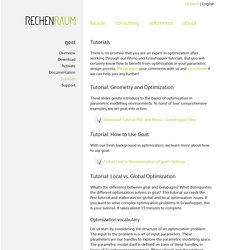 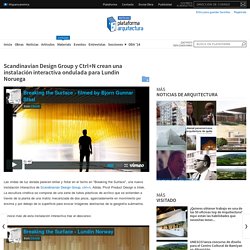 Posters. Zaha Hadid to design a new gallery at the London Science Museum - Arch2O.com. Zaha Hadid’s design for the Maths Gallery at the London Science Museum has just won the commission sweeping off her competitors Carmody Groarke & Adam Richards! About her design for world’s foremost gallery of mathematics, Hadid said “The design explores the many influences of mathematics in our everyday lives; transforming seemingly abstract mathematical concepts into an exciting interactive experience for visitors of all ages”.

Courtesy of Zaha Hadid Architects & London SCience Museum The gallery as part of a plan to transform one of the museum’s thirds over the next five years, will be open to visitors in 2016 and will be curated by David Rooney, who also curated another exhibition on the life of Alan Turing. London Science Museum announced that the new gallery has been made possible by the largest individual donation ever made to the museum, an unprecedented £5 million gift from David and Claudia Harding. Magazine no. 25. For many people the idea of biomimicry is an aesthetic, something “skin deep” or decorative. Biomorphic architecture in this sense has been around for millennia. What makes the relatively new field of biomimetic architecture different?

Design has a strong formal component, so when architects look at nature the formal aspect has often been the driving force, with function questioned less. This is where the opportunities are for biomimetic design – really tapping into the functional and performative aspects of architecture. But we’re still at a very early stage in this field. Is this also because we’re only just beginning to develop the technology allowing us to do this?

Yes, certainly technological progress is a component, but so too is the way we perceive technology and engineering, which is so twentieth century still. Cecil Balmond on EQUILIBRIUM. Tutorials. Stuart-Smith Studio. Shadows_Motion Capture performance. Company Plans To Build House From 3D Printed Salt. Most of us probably consume too much salt in our diet, but we've been doing it wrong—we shouldn't be eating this once precious commodity, we should be building with it. Design agency Emerging Objects, who specialize in 3D-printed architecture, have plans to 3D-print a house using salt from San Francisco Bay in their project 3D Printed House 1.0. The salt will be harvested from salt crystallisation ponds in Redwood City and turned into a salt polymer (salt mixed with glue) which is strong, waterproof and translucent.

The outside of the building will be clad in a cement polymer, which is both lightweight and strong, in a variegated pattern so light can pass through certain areas. Inside, private areas like dining room, bedrooms, and bathrooms will be created using tiled, two-storey vessels called Saltygloo (below), using a method which the company has experimented with before to create freestanding structures. Saltygloo What the cement polymer cladding will look like. Bossinha. ICD/ITKE Research Pavilion 2013-14. ICD/ITKE Research Pavilion 2013-14: Video Photographs by Roland Halbe Photographs by ICD/ITKE University Stuttgart Development Process ICD/ITKE Research Pavilion 2013-14: Interactive Panorama. Morphogenesism. SJET. SJET LLC, started by Skylar Tibbits in 2007, was initiated as platform for experimental computation + design and has grown into a multidisciplinary research based practice. SJET crosses disciplines from design, fabrication, computer science to robotics... SJET is a direct result of an endless search for more...

Skylar Tibbits' research focuses on self-assembly and programmable material technologies for novel manufacturing, products and construction processes. Skylar is currently a Research Scientist in MIT's Department of Architecture, teaching graduate and undergraduate design studios and co-teaching How to Make (Almost) Anything, a seminar at MIT's Media Lab. Skylar was recently awarded a 2013 Architectural League Prize, The Next Idea Award at Ars Electronica 2013, the Visionary Innovation Award at the Manufacturing Leadership Summit, a 2012 TED Senior Fellowship and was named a Revolutionary Mind in SEED Magazine’s 2008 Design Issue. www.sjet.us www.scriptedbypurpose.net.

Discotech. Programmatic agenda In the process of hybridising the airport lounge with the discotheque, the project generates several dilemmas regarding the merging of different administrational control levels but also the territorilization of informal tendencies. The response towards both the above is the pursue of a hyper-flexible relationship between human inhabitation and an ever shifting material – environmental milieu called programmatic migration: The term describes the nomadic regime where human inhabitation is in constant negotiation with the architectural envelope within the prospect of ephemeral colonization of particular localities.