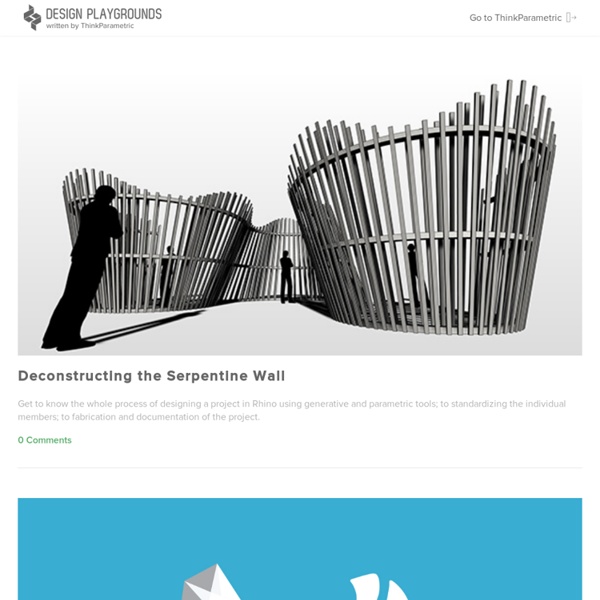 Archive » SIM_2011 by ESC-Studio [PROCESSING] SIM_2011 is a custom physics simulation software for tensile structures created by ESC-Stuido (Enrique Ramos, Silivia Polito yCiriaco Castro).This project sets out to generate and evolve different structural topologies within an environment in which physical laws are simulated, allowing for structural performance to be measured. Two distinct sets of structures have been studied: – Predefined topologies: Structures defined by pre-set topologies, using the physical simulation engine to reach the equilibrium state defining the final form of the structure. – Evolutionary Topologies: A genetic algorithm defines the parameters of a constrained spring system that generates populations of structures evolving towards an optimised solution. The implemented architecture of nodes and links with embedded metadata containing the physical properties of the elements permitted the measurement of the total weight of the structures, maximum deflections, horizontal displacements and number of elements.

Looking 4 data visualization Vortex – [Complex Geometry] Another attractor definition; this time I’m using a similar principle to the one I applied in the pattern transformation exercise I published some time ago; from a regular array of points I’m applying a rotation using several attractor points, generating this kind of vortex; a really nice effect in my oppinion; if You are familiar with the exercise I mentioned before, or if you plan to give it a try, you’ll find several diferences, given that Grasshopper have had several improvements since the time I developed that excercise; I probably should take some time to revisit my old definitions and update them, maybe some day I will. As usual, you can download the definition from the link bellow, this time I’m not including any example file, since all the geometry you need is internalized in the definition; if You want to change the atractor points, just create your own ones in Rhino and assign them to the geometry inputs Creative Commons Attribution-Share Alike 3.0 Unported License

ImageMagick: Convert, Edit, Or Compose Bitmap Images Five Incredible—and Real—Mind Control Applications Scientists achieved the first remote human-to-human brain interface this week, when Rajesh Rao sent a brain signal over the Internet that moved the hand of colleague Andrea Stocco—even though Stocco was sitting all the way across the University of Washington's campus. Using one human brain to direct another person's body via the Internet was an amazing breakthrough. But other feats of mind control are already realities, particularly in the realm of human machine interfaces (HMIs). Here are some amazing examples of what our brains can already do. Compose and Play Music Yes, music composition always took place in the brain. Electroencephalography (EEG) headwear devices record the electric signals that are produced when the brain is at work and can connect them wirelessly to a computer. For example, thinking about pushing a button on the computer screen produces a brainwave pattern that computer software can then recognize and associate with that task. Screen Mobile Phone Calls "Bionic" Limbs

Brain-computer interface allows mind control of robots | Discover | University of Minnesota It's a staple of science fiction: people who can control objects with their minds. At the University of Minnesota, a new technology is turning that fiction into reality. In the lab of biomedical engineering professor Bin He, several young people have learned to use their thoughts to steer a flying robot around a gym, making it turn, rise, dip, and even sail through a ring. The technology, pioneered by He, may someday allow people robbed of speech and mobility by neurodegenerative diseases to regain function by controlling artificial limbs, wheelchairs, or other devices. A report on the technology has been published in the Journal of Neural Engineering. "My entire career is to push for noninvasive 3-D brain-computer interfaces, or BCI," says He, a faculty member in the College of Science and Engineering. Mapping the brain He's BCI system works thanks to the geography of the motor cortex—the area of the cerebrum that governs movement. Tapping the map Future directions "Working for Dr.