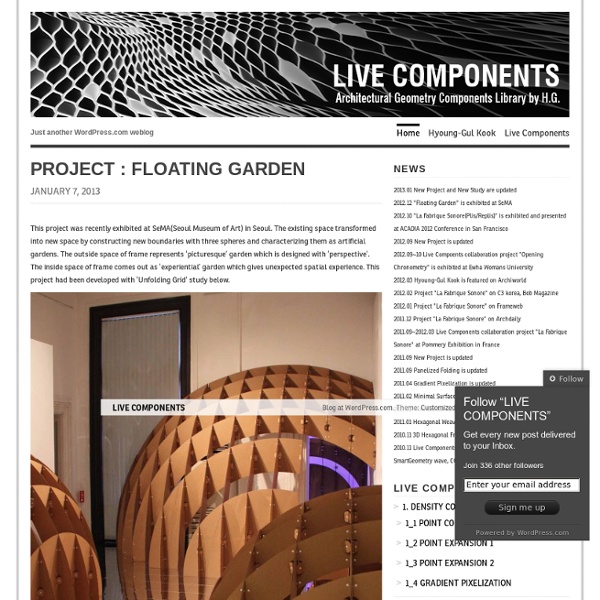 Grasshopper « Attitude Geometries Cellular Automata Building Propotional studies of a building facade. These videos shows an animation how to use the generative design methods in architecture and design. Methods: Synthesis, Celluar Automata, zelluläre Automaten, Parametrics Grasshopper Modules - Proxy Wiki From Phylogenesis, FOA 2003 The following Grasshopper modules were created in consultation with FOA's Phylogenesis, in particular the taxonomy of forms found at the conclusion of the book. Grasshopper is an exciting and evolving modeling platform - the following examples attempt to develop a range of geometric examples to explore its form-making potentials.

Louver orientation grasshopper rhino Multi-object orientation: Grasshopper modeling in Rhino from aace hogrefe on Vimeo. DOWNLOAD: GH Louver Orientation Definition, Rhino File Something I have been wanting to experiment with is multi-object orientation towards a point or direction. There are multiple uses for a script such as this, but the biggest for me would be louver orientation in relation to the sun. Cloud Studio IIT Architecture Fall 2013 Design as a Performative Material Practice – Semester 1 Professor: Alphonso Peluso email: peluso@iit.edu R e s o u r c e M a t e r i a l Studio Brief: Peluso_Cloud_Studio_081913 Studio Brief Definitions: Peluso_Studio_Definitions-01

RHINO: GRASSHOPPER DEFINITIONS - RHINO / GH This definition was developed for my final thesis project to generate a louver system based on functional requirements within the building. The performance was then tested in Ecotect. A large part of my thesis design involved invertible arena seating with many moving parts. I used Grasshopper as a means to develop the seating testing clearances, site lines, and many other variables.

AKT (Sawako & Panagiotis) « Scriptedbypurpose Sawako and Panagiotis at AKT Currently they are working as computational design researchers in Adams Kara Taylor based in London. They have worked on projects by well known architectural practices in the United Kingdom including Zaha Hadid Architects, Future Systems, and Foreign Office Architects in the development of architectural design involving complicated geometries. Our research aims in developing design solutions that respect criteria of structural efficiency and architectural intentions by interrogating the intrinsic properties of forms and their embedding space. Panagiotis Michalatos Studied Architecture at NTUA Athens Greece and graduated in 2001.

Fast 3d slicer Ive worked all the day in this definition and I hope you like it. With this you can: -make ribs with notches -use the sliders to specify the x and y spacing of a rectangular grid or -use a custom grid (for this you just need 2 sets of lines) Polyline Attractor Grasshopper Rhino Download: GH Definition I have been seeing a lot online with point attractors. The idea is that geometry will change its size or form based on its distance from a point. The further the object is from the point, the larger or smaller it will get.