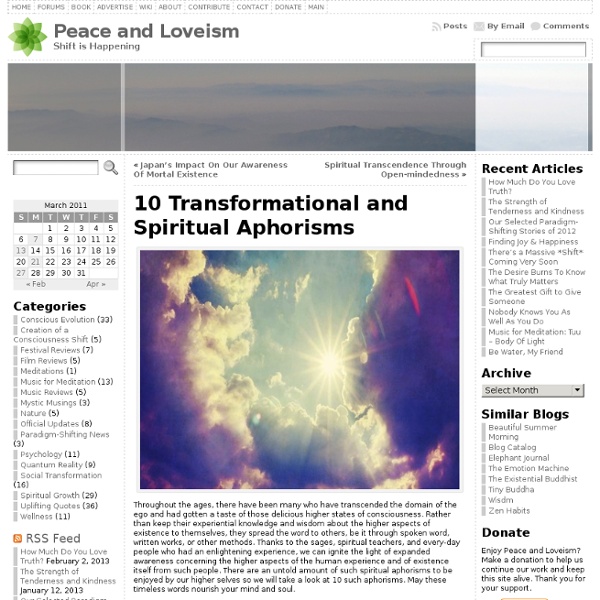 Throughout the ages, there have been many who have transcended the domain of the ego and had gotten a taste of those delicious higher states of consciousness. Rather than keep their experiential knowledge and wisdom about the higher aspects of existence to themselves, they spread the word to others, be it through spoken word, written works, or other methods. Thanks to the sages, spiritual teachers, and every-day people who had an enlightening experience, we can ignite the light of expanded awareness concerning the higher aspects of the human experience and of existence itself from such people. There are an untold amount of such spiritual aphorisms to be enjoyed by our higher selves so we will take a look at 10 such aphorisms. May these timeless words nourish your mind and soul. Aphorism 1 A human being is a part of a whole, called by us a universe, a part limited in time and space. -Albert Einstein Aphorism 2 “Life is what you make it,” this is very true. -Unknown Aphorism 3 Aphorism 4

7 Insane Ways Music Affects The Body (According to Science) The world is chock full of ear hurt that some people willingly refer to as music. The Jonas Brothers, Lady Gaga, Conway Twitty; they all produce high quality records and 8-tracks for our enjoyment whether we like it or not. But music--even terrible music--has a stunning amount of power over our bodies. For instance science says music can... Addiction and Zen A handbook for addicts and those in recovery, and their families. Foreword I warmly recommend Mary Heath's article on The Benefits of Zen Meditation in Addiction and Recovery. It shows a sensitive awareness and understanding of the difficulties that people face when they decide to come off drugs and gives a range of strategies for helping this process, ranging from traditional Zen work with the breath and mindfulness and walking meditation, to her own discoveries. Taken together these provide a kit from which people in recovery can choose.

Beginning to See by sujata pen-art by julio lynch this book is dedicated to the 9 to 5ers 6 Mind-Blowing Ways Genetic Engineering Might Save Your Life Genetic engineering scares a lot of people, partly because we love making sci-fi movies and video games starring walking humanoid horrors that resulted from experiments gone wrong. And, while the idea of something like growing a human heart in a sheep's body just seems wrong somehow, it probably seems less wrong to the person who actually needs a heart transplant. What we're trying to say is that as weird as it is, genetic engineering may save your life some day thanks to things like ...

Lojong - Wikipedia, the free encyclopedia - StumbleUpon Lojong (Tib. བློ་སྦྱོང་,Wylie: blo sbyong) is a mind training practice in the Tibetan Buddhist tradition based on a set of aphorisms formulated in Tibet in the 12th century by Geshe Chekhawa. The practice involves refining and purifying one's motivations and attitudes. How To Train Yourself To Be In The Mood You Want Dec 27, 2010 When you have major changes going on in your life, or you’re just frustrated about where you are, it’s easy to get trapped in a cycle of depression, bad moods and frustration. I know, I’ve been there … and when I’m not careful, I still get there more than I want to.

5 Mind Blowing Ways Your Memory Plays Tricks On You Everybody will tell you that memory can't be trusted. When they say that, of course, what they mean is other people's memories can't be trusted. We don't like to think that everything we know about the world is based on a deeply flawed and illogical storage system. We're not talking about being bad at matching faces with names here.

The 9 Epiphanies That Shifted My Perspective Forever - Global One TV - StumbleUpon By David Over the years I’ve learned dozens of little tricks and insights for making life more fulfilling. They’ve added up to a significant improvement in the ease and quality of my day-to-day life. But the major breakthroughs have come from a handful of insights that completely rocked my world and redefined reality forever. The world now seems to be a completely different one than the one I lived in about ten years ago, when I started looking into the mechanics of quality of life. It wasn’t the world (and its people) that changed really, it was how I thought of it.

How to Trick Your Brain for Happiness This month, we feature videos of a Greater Good presentation by Rick Hanson, the best-selling author and trailblazing psychologist. In this excerpt from his talk, Dr. Hanson explains how we can take advantage of the brain’s natural “plasticity”—it’s ability to change shape over time. 7 Basic Things You Won't Believe You're All Doing Wrong If you're like us, you might sometimes have a problem with complex tasks, like trying to drive an ambulance and send a text message at the same time. But hey, at least most of us have figured out the simplest things that get us through the day, right? Except, you know, some of the simple things we've done every day of our lives, like ... What could be simpler than taking a good crap?

Happiness “The amount of happiness that you have depends on the amount of freedom you have in your heart.” – Thich Nhat Hanh Who doesn’t want to be happy? Just take a look at any moment of your life, any choice you make. Isn’t your intention to be happy? By happiness, I don’t necessarily mean the pollyanna, silly-smile-on-your-face kind. What I mean is a deep sense of contentment, the capability of being peaceful and at ease no matter what, an inner knowing that things are just fine.

Mindfulness Rituals “Smile, breathe and go slowly.” - Thich Nhat Hanh, Zen Buddhist monk Post written by Leo Babauta. Are you simply moving through your day, without fully living? I did this for many years. It was as if life were just passing by, and I was waiting for something to happen. I always felt like I was preparing for something later.