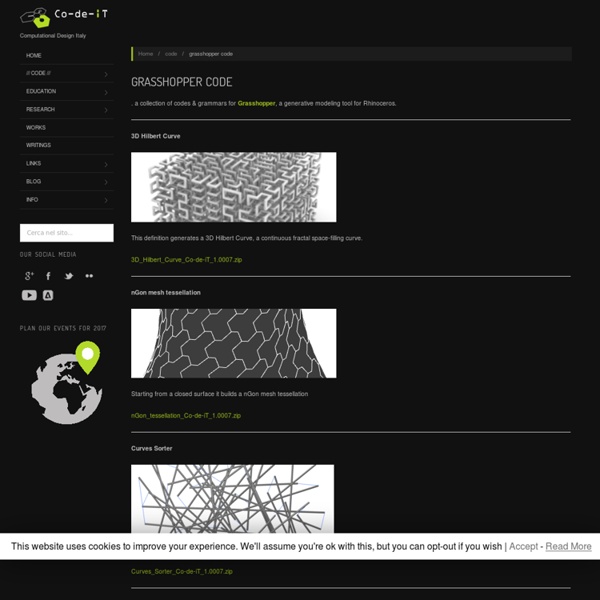 . a collection of codes & grammars for Grasshopper, a generative modeling tool for Rhinoceros. 3D Hilbert Curve This definition generates a 3D Hilbert Curve, a continuous fractal space-filling curve. 3D_Hilbert_Curve_Co-de-iT_1.0007.zip nGon mesh tessellation Starting from a closed surface it builds a nGon mesh tessellation nGon_tessellation_Co-de-iT_1.0007.zip Curves Sorter Starting from a list of curves it takes the first one then it looks for the closest curve and it eventually flips the direction to optimize the toolpath lenght. Curves_Sorter_Co-de-iT_1.0007.zip froGH A sparse collection of tools for Grasshopper. See the code, explanation and download here. Clusterizer This definition groups indexes of connected points into separate clusters. Clusterizer_Co-de-iT_0.9.0076.zip Spirograph This definition simulates a spirograph tool. Spirograph_Co-de-iT_0.9.0076.zip 3D Differential mesh relaxation This definition explores the 3D relaxation of a mesh effected by an image gradient. Vorospace Math surfaces .

Straight Timber Connections Precedents Wood-to-Wood Connections Cross Timber Joints CNC milled connections Polyline Attractor Grasshopper Rhino Download: GH Definition I have been seeing a lot online with point attractors. The idea is that geometry will change its size or form based on its distance from a point. The further the object is from the point, the larger or smaller it will get. I wanted to expand on this idea further and see if a spline curve could take the place of the point as the attractor. The Line could represent a multitude of things from streets of a city, to circulation paths.

Solar Calculation Details Solar Calculation Details General The calculations in the NOAA Sunrise/Sunset and Solar Position Calculators are based on equations from Astronomical Algorithms, by Jean Meeus. The sunrise and sunset results are theoretically accurate to within a minute for locations between +/- 72° latitude, and within 10 minutes outside of those latitudes. However, due to variations in atmospheric composition, temperature, pressure and conditions, observed values may vary from calculations. Figural Studies Workshop 2013 Master of Architecture students at the Knowlton School of Architecture participated in a one week Figural Structures Workshop using karamba3d. Over the course of the workshop, which ran from January 10-16, approximately one-half of the KSA’s second and third year MARCH class learned to use parametric geometric modeling, finite element calculations and optimization algorithms to develop intricate structural scenarios for figural building massings inspired by the KSA’s recent exhibition at the 2012 Venice Biennale. Prototypes resulting from the workshop were reviewed by KSA professors Jeff Kipnis and José Oubrerie and guest lecturer Klaus Bollinger. Students worked in teams; four teams of six to eight students each. Each team was responsible for designing, analyzing and then building a large spatial structure inspired by the figural building masses developed for the KSA’s recent exhibition at the 2012 Venice Biennale.

rh TowerContour Option Explicit 'Script written by davide del giudice 'Script copyrighted by www.co-de-it.com O P E N S Y S T E M S Last (lost) entry for "ARCH+ Competition, Simple Systems - Complex Capacities" Brief:"The design of a material system that is in exchange with is context-specific environment and that, in doing so, can fulfil functional and performative requirements." The entry proposed a profilerated field of homeostatic cable structures addressing pluri-potential capacities such as structural, organizational, environmental and spacial ones. What is promoted is the articulation of a heterogeneous, differentiated structure. "Without modifications to the social and material environment, there can be no change in mentalities. Here, we are in the presence of a circle that [...] postulate the necessity of founding an "ecosophy" that would link environmental ecology to social ecology and to mental ecology".