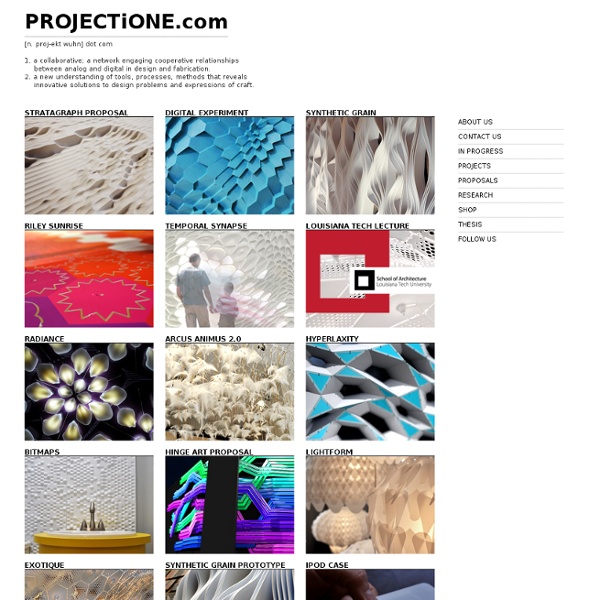 Artists | codedchromics I hadn’t heard about this before but fist (whoops, mean first) saw this earlier this month mentioned on Syuzi Pakhchyan’s blog Wearable Technology (always an inspiration!) Sophie de Oliveira Barata offers a ‘real’ option ‘surreal’ option and an ‘unreal’ option – you’ve just got to love that! Here are some of the incredible decorated and unusual prosthetics from The Alternative Limb Project - “The Alternative Limb Project offers a personal and friendly bespoke service, which provides unique prosthetics to blend in with the body or stand out as a unique piece of art, reflecting the wearer’s imagination, personality and interests. We will involve the wearer in all stages of the process from conception of ideas to the final work. Read more about what they are doing here Like this: Like Loading...

5osA: [오사] :: [ Plasma Studio ] 3G - Extension Gallery Chicago Nov 06- Jan 07 Installation with work by Plasma Studio Plasma Studio's was invited to conceive a site specific installation for the launch of this new gallery for architecture in the Arts District East Pilsen, Chicago. The approach was from the beginning to enhance the already rich modulation of the gallery and its multiple levels and mezzanines with a system that makes visitors discover the existing space in a new way. Geometric key points that define the gallery through the three axis of the Cartesian organization system were identified to form the hinges between existing and new. This virtual model was translated with support form Arup into a tensegrity structure that further promotes the legibility of interdependencies between the static systems of old and new and the dynamics of trajectories and light. The installation defies definitions of what is supposedly art and what architecture.

Structural Tessellations and Morphologies | 74 FOOTWEAR DESIGN CONSULTING The honeycomb is probably the epitome of structural efficiency. Bees have been creating hexagonal comb structures for millenia and humans inspired by the incredible structural strength to weight ratio of their combs have joined them. It is said that the first man-made honeycomb was made by Daedalus using gold by lost wax casting more than 3000 years ago. In 1859 Charles Darwin said that “the comb of the hive-bee, as far as we can see, is absolutely perfect in economizing labour and wax”. Little noticed is that even the the closed ends of the honeycomb cells are also an example of geometric efficiency as their trihedral shape allows two opposing honeycomb layers to nest into each other, with each facet of the closed ends being shared by opposing cells. 50 years later D’Arcy Wentworth Thompson discovered that bees build their honeycombs first as cylinders and as they push more wax onto the inside surface they also push the soft sides out and up against the neighboring cylinders.

no boxes! Fritz Obermeyer’s Jenn is a nicely crafted java application that allows a playful examination of structures in non-Euclidian space, more specifically Coxeter polytopes in stereographic projection. These complex geometric structures are the 4-dimensional Sisters to the polyhedra and have, what seems like, recursive interiors and packing formations that resemble bubbles in foam. The applet allows you to fly through these structures and orient the camera view according to your whims; other controls include toggles for the kind of rendering display settings. Perhaps I shouldn’t report it, but there are also some nice rendering glitches on some of the selected models on certain views. The word ‘polytope’ was introduced by Alicia Boole Stott , the daughter of logician George Boole. You might experience a feeling of non-Euclidean déjà vous while roaming around Jenns polytope space , the experience of space is a lot like being in one of Escher’s drawings.

Parametric O P E N S Y S T E M S design playgrounds Posts Tagged ‘Parametric Architecture’ We are happy and excited to announce that finally after a long time we have a launch day for ThinkParametric. Hy-FI is the winning proposal for this year MoMA´s PS1 competition, a tower-like topology volume composed by compostable bricks that use corn stalks and mushroom roots in their process of elaboration. In this tutorial you will learn how can you create shell-like surfaces made of planar hexagons using Kangaroo´s Planrization Forces. The Centenial Chromagraph is an installation/ data visualization portraying the history of the University of Minnesota School of Architecture.Their creators refer to it as an exercise in data spatialization where the use of computational tools were employed to generate formal and spatial constructions with large quantities of data. Pudelma is a pavilion inspired by the traditions of Finnish wood-working and created as part of the European Capital of Culture Program.