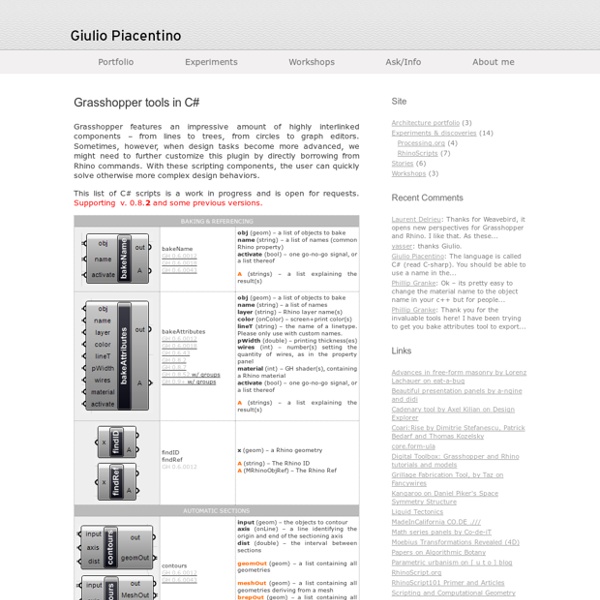 Grasshopper Assembly for v5 - Visual Studio Marketplace Grasshopper Wizards For Grasshopper 0.9.0061+ in Rhinoceros 5 C# Add-on - Provides a C# project with a GH_Component-derived class and a GH_AssemblyInfo-derived class. Download the Grasshopper SDK with the Rhino _GrasshopperGetSDKDocumentation command, or obtain the .chm file from the Related links section below here. Features This extension provides add-on and component wizards for Grasshopper projects. If you have an existing project You can still use the wizard to add new component even if your project already exists. Use the 'Add Item' wizard in Visual Studio. Grasshopper is a graphical algorithm editor tightly integrated in Rhinoceros and implemented by the Rhinoceros manufacturer, McNeel. www.grasshopper3d.com More information Grasshopper utilizes RhinoCommon. For support about this wizard, contact the Rhino Developer Newsgroup, discourse.mcneel.com or email giulio@mcneel.com. Copyright (c) 2012-2016 Robert McNeel and Associates. Related Links RhinoCommon samples RhinoCommon documentation

Rhino Curve Based Modeling using curves as a basis for generating 3d geometry Introduction Curves as basis for geometry In the previous workshop we worked with quite a straightforward method of generating 3D geometry. If you look at industries where aesthetic design plays a mayor role like industrial design and the car industry you will see that they often use a different type of geometry which supports the required form freedom. Accuracy of the geometry ( important for manufacturing) The shapes it can generate The ability to adjust the shape The workflow of generating the shapes. Due to its accurate mathematical description of even the most complex shapes it can be used in design and manufacturing. The form freedom is quite extensive. There are range of tools available to effectively adjust the geometry and to support formal exploration Because the geometry is based on curves , the workflow will be completely different from the CSG workflow. Nurbs concept behind NURBS deformation of planks degree creating curves

grasshopper code . a collection of codes & grammars for Grasshopper, a generative modeling tool for Rhinoceros. 3D Hilbert Curve This definition generates a 3D Hilbert Curve, a continuous fractal space-filling curve. 3D_Hilbert_Curve_Co-de-iT_1.0007.zip nGon mesh tessellation Starting from a closed surface it builds a nGon mesh tessellation nGon_tessellation_Co-de-iT_1.0007.zip Curves Sorter Starting from a list of curves it takes the first one then it looks for the closest curve and it eventually flips the direction to optimize the toolpath lenght. Curves_Sorter_Co-de-iT_1.0007.zip froGH A sparse collection of tools for Grasshopper. See the code, explanation and download here. Clusterizer This definition groups indexes of connected points into separate clusters. Clusterizer_Co-de-iT_0.9.0076.zip Spirograph This definition simulates a spirograph tool. Spirograph_Co-de-iT_0.9.0076.zip 3D Differential mesh relaxation This definition explores the 3D relaxation of a mesh effected by an image gradient. Vorospace Math surfaces .

C# Tutorials (C#) This documentation is archived and is not being maintained. The C# tutorials provide an overview of the basics of the language and identify important language features. Each tutorial includes one or more sample programs. The tutorials discuss the sample code plus provide additional background information. See Also downloads « toolbox trier downloads Here you can find a couple of exercises related to our most beloved rhino for download. grasshopper 1. highrise-DJ Our simple but playful interpretation of a field of cross shaped towers on a rigid grid shows some differentiation… and associativity with one point. You can move the point by using grasshoppers remote control view and then see the highrises reacting in real time. exercise here 2. population This is about the population of a surface with simple spheres – whereby the size (radius) of each sphere will be defined by the z-value of its centre-point. exercise here 3. street An exercise on law-curves that control the shape of a row of boxes. exercise here 4.twist This exercise plays with one of the current formal fashions – “the twist”. exercise here 5.brick-wall This exercise is inspired by the work of Gramazio+Kohler, Zuerich. This is currently under construction! - Nutzung des Lasercutters im Lehrgebiet Digitales Entwerfen und Konstruieren, Raum D105. Gefällt mir:

Your First Plugin (Windows) with C# Getting Started by Dan Belcher This guide walks you through your first plugin for Rhino for Windows using RhinoCommon and Visual Studio. It is presumed you already have the necessary tools installed and are ready to go. HelloRhinoCommon We will use the RhinoCommon Templates to create a new, basic, command plugin called HelloRhinoCommon. If you are familiar with Visual Studio, these step-by-step instructions may be overly detailed for you. We are presuming you have never used Visual Studio before, so we’ll go through this one step at a time. File New If you have not done so already, launch Visual Studio (for the purposes of this guide, we are using Visual Studio 2015 Community Edition and C#). Boilerplate Build Before we do anything, let’s build and run HelloRhinoCommon to make sure everything is working as expected. Plugin Anatomy Use the Solution Explorer to expand the Solution (.sln) so that it looks like this… Note: Depending on your edition of Visual Studio, it may look slightly different.

Data trees and C# in Grasshopper - James Ramsden Understanding how Grasshopper handles data is crucial for taking full advantage of GH’s capabilities. For collections of data, they can either be in the form of lists or trees. A list is a collection of items of data, in a particular order, but with no hierarchical structure. The component in the top-right is the param viewer. The ‘N’ denotes a list with N items. A tree is any data structure in GH with multiple branches. Now, let’s make a grid of points. Here, we have cleverly grafted the Y input to coerce Grasshopper into giving us 25 points for our list of 5 numbers. What’s happened here is that Grasshopper has created 5 branches. We can verify this using the param viewer. Trees can be created and manipulated in C# components too. The data we are saving, such as a Point3d or an integerThe path we are saving to The path is declared as a list of numbers denoting the sequence of the branches needed to access the list we are interested in. GH_Path pth = new GH_Path(i,j) Setting up a tree

Introduction to the C# Language and the .NET Framework | Microsoft Docs C# is an elegant and type-safe object-oriented language that enables developers to build a variety of secure and robust applications that run on the .NET Framework. You can use C# to create Windows client applications, XML Web services, distributed components, client-server applications, database applications, and much, much more. Visual C# provides an advanced code editor, convenient user interface designers, integrated debugger, and many other tools to make it easier to develop applications based on the C# language and the .NET Framework. Note The Visual C# documentation assumes that you have an understanding of basic programming concepts. If you are a complete beginner, you might want to explore Visual C# Express, which is available on the Web. C# Language C# syntax is highly expressive, yet it is also simple and easy to learn. As an object-oriented language, C# supports the concepts of encapsulation, inheritance, and polymorphism. The following are additional C# resources: See Also

C# Station Intro to C# Scripting in Grasshopper This tutorial covers the use of the timer block to continuously execute a custom script. By: Zach Downey In this tutorial we recreate the pointAt componet and the divide curve component using C#. In this lesson, we cover control flow in your scripts. Nested loops! In this tutorial we demonstrate the while loop by recreating the series component. In this tutorial we look at the foreach loop. In this quick tutorial we apply what we learned about lists and loops from part 3 to create a list of points. In part 3 we step away from geometry and talk about constructing lists and loops. In part two we recreate the line between two points component using the C# scripting component. We begin by looking at the how to code a point using Grasshopper's C# scripting component. Want to be an author? Already have a video you'd like to post?