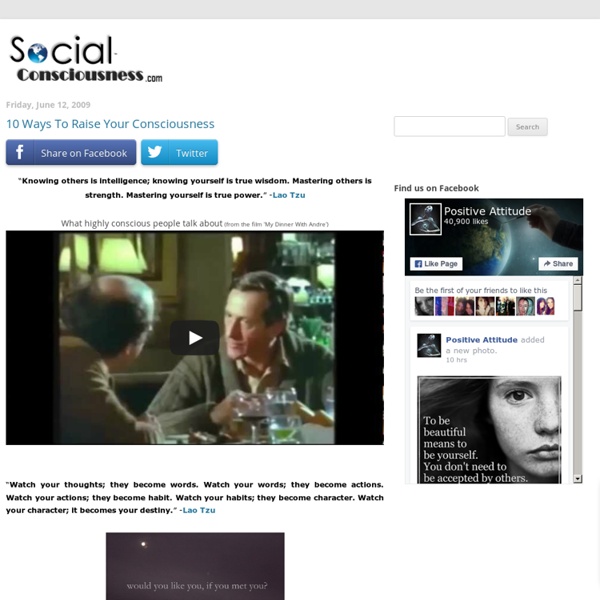 “Knowing others is intelligence; knowing yourself is true wisdom. Mastering others is strength. Mastering yourself is true power.” What highly conscious people talk about (from the film 'My Dinner With Andre') “Watch your thoughts; they become words. 10 Ways To Raise Your Consciousness Becoming more conscious is the progressive realization of conscious mastery over your mind. 1. First, accept the truth. Secondly, speak the truth. The more you’re able to accept and speak the truth, the more conscious you become. Yes, there may be consequences when you switch from lies and half-truths to the full truth, but highly conscious people know that crossing that bridge is well worth the effect. A short-term adjustment is nothing compared to the joys of living honestly and openly. 2. Courage is the gatekeeper between unconscious growth and conscious growth. A powerful guiding principle to adopt is, “Whatever I fear, I must face.” 3. 4. 5. 6. First and foremost, know thyself. 7. 8. 9. 10. Related:  Consciousness & Awakening

10 Ways to Raise Your Vibrations All your thoughts and feelings are energy, and energy is vibration. Learn to Raise those Vibrations and watch your life change dramatically. 1. Find something beautiful and appreciate it. 2. 3. 4. 5. 6. 7. 8. 9. 10. What is Consciousness? We become consciousness when there is an awareness of movement, balance and clarity in the relationships between all these directions, giving rise to the experience of presence and an awareness of the core Self, which is whole. Life is experienced as a field of awareness and our relationships become interactions with consciousness within those fields. Modern quantum physicists are now demonstrating the truth of this ancient wisdom as they delve ever deeper into the mystery of how life is created. The relationship of the creative expression of our essence in co-creation with the Divine can be most fully be experienced through play, community, love, presence and an awareness of all Life. We can begin to understand how we synthesize structures of meaning or patterns, both old and new, through the experiences of different learning environments that open us up to the feeling of belonging and of connection, of being home.

Brainwaves Brainwaves There is extensive research into the anatomy and functions of the brain. Studies into the the frequencies of brainwaves have led to the classification of various conscious states. Here is a little technical stuff to summarize what happens inside the brain during altered states of consciousness. Normal waking consciousness: Low amplitude beta wave, or beta rhythms above 12 Hertz (12 transitions or cycles per second) includes multiple and varying frequencies when we are awake. Higher Mental Activity, Perception and Consciousness: Gamma waves, 40 Hertz (Hz), can often be between 26 and upwards of 70 Hz. Meditation:Alpha waves, 12.39 ~ 8.2 Hz, are commonly detected by electroencephalography (EEG) or magnetoencephalography (MEG) and originate from the occipital lobe during periods of relaxation, with eyes closed but still awake and during drowsiness. Panning: 0.49 ~ 0.01 Hz Where Have You Gone?

47 Mind-Blowing Psychology-Proven Facts You Should Know About Yourself - StumbleUpon I’ve decided to start a series called 100 Things You Should Know about People. As in: 100 things you should know if you are going to design an effective and persuasive website, web application or software application. Or maybe just 100 things that everyone should know about humans! The order that I’ll present these 100 things is going to be pretty random. So the fact that this first one is first doesn’t mean that’s it’s the most important.. just that it came to mind first. Dr. <div class="slide-intro-bottom"><a href="

The Bridge......Crossing to a New Reality 20th January 2014 by Celia Fenn The Importance of Grounding.\ It has been an intense and rather chaotic beginning to the year of 2014! Most of the questions that I get from people are about how to cope with these powerful energies. So, briefly, let’s look at why the energies have been feeling so intense. This only works well when the person is grounded and can allow the energy to flow through them and into the Earth where it is absorbed and used by the Earth. So, it really is up to us to start new creations and begin to ground these new creations. It simply is that with our history of 20th Century Psychology, we seem to imagine that we need to heal and process for ever. In this way we can step into the Full Power of the New Galactic Human Template and enjoy the intense creative power of the Solar Light Codes as they are received on the Earth. So, with all this happy “Sun Dancing” that we have been doing, we have also been doing a Moon Dance with the energies. www.starchildglobal.com

Memory in the Brain [Interactive] Although most people think of memory as a vault for storing information, it is more like a seamstress who stitches together logical threads into scenes that make sense. In this view, a good memory is therefore not one that holds lots of data but that can deftly separate what is useful from what could distract or upset you. Getting rid of what is not necessary—forgetting—is thus an important part of memory and of thought. It is also critical to emotional wellbeing. Revisiting bad memories is hardly a formula for happiness, after all. To learn more about memory and the power of forgetting, see the January 2012 Scientific American Mind. More to Explore8 Ways To Forget Your TroublesLet It GoA Feeling for the PastTrying to ForgetTotaling Recall10 Novels That Will Sharpen Your Mind [Interactive]

Measuring Consciousness Levels (Dr. Hawkins) Measuring Consciousness Levels (Dr. Hawkins) Source: SpeedofLightFilms.com Consciousness has been defined loosely as a constellation of attributes of mind such as subjectivity, self-awareness, sentience, and the ability to perceive a relationship between oneself and one’s environment. The progress toward the attainment of higher consciousness can be derived through the research of David Hawkins, in Power vs. According to Dr. According to Dr. The scale advances logarithmically. Shame (20) – Just a step above death, this is the consciousness level of one contemplating suicide or thoughts of death. Guilt (30) – This is a step above shame, yet perhaps still having thoughts of suicide. Apathy (50) – Feeling hopeless or victimized; the state of learned helplessness. Grief (75) – A state of perpetual sadness, loss and depression. Fear (100) – Seeing the world as dangerous and unsafe; paranoia. Pride (175) – The first level where one start to feel good, but it’s a false feeling. Like this: Related

List of Values The following list of values will help you develop a clearer sense of what's most important to you in life, as explained in the article Living Your Values. Simply print out this page, mark the values which most resonate with you, and then sort your list in order of priority. As you scan the values list below, you may find that while most values have little or no significance to you (and some may even seem negative to you), there are those values that just jump out and call to you, and you feel, "Yes, this value is part of me." Steve RecommendsHere are my recommendations for products and services I've reviewed that can improve your results. Site Build It! 10 Steps to Enhance Your Natural Telepathic Abilities Galactic Transmission HJ: We all have telepathic abilities, but like any skill, it takes a bit of practice to get good at it and when you don’t use it, it tends to fade. Despite what many people believe, however, there is an actual art and science to mastering telepathic abilities. In the article below, Abhishek Agarwal gives some great advice towards boosting your telepathic abilities with minimal effort. To offer a bit of insight, the principle on which telepathy operates is the ability of the subconscious mind to connect with anything — people, objects, spirits, plants, guides, etc. Finally, you’ll want to be sure at the end of the practice to cut/sever all links/connections you formed with any people you practiced with. - Truth 10 Steps to Master Telepathy–Mind to Mind Communication By Abhishek Agarwal | Trans4Mind | Abhishek’s Paranormal Den The word “Telepathy” has been derived from the words “tele” meaning “distance” and “pathy” meaning “feeling.”