The Neuroscience of Creativity and Insight 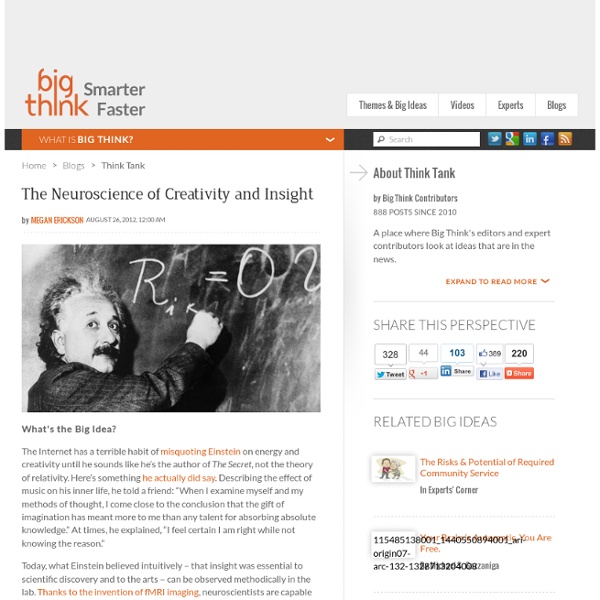 The Internet has a terrible habit of misquoting Einstein on energy and creativity until he sounds like he’s the author of , not the theory of relativity. Here’s something he actually did say . Describing the effect of music on his inner life, he told a friend: “When I examine myself and my methods of thought, I come close to the conclusion that the gift of imagination has meant more to me than any talent for absorbing absolute knowledge.” Today, what Einstein believed intuitively – that insight was essential to scientific discovery and to the arts – can be observed methodically in the lab. Eric Kandel is a pioneer in the field who worked alongside Harry Grundfest in the very first NYC-based laboratory devoted to the study of the brain. “There are a group of people who have studied aspects of creativity,” he says. The ah-ha phenomenon or Eureka effect is the well-documented flash of insight that occurs when a solution just comes to you. Related Content Megan Erickson Dr. Related:  Neuroscience & Consciousness

Brain Bugs: Hallucinations, Forgotten Faces, and Other Cognitive Quirks | Think Tank What's the Big Idea? If seeing is believing, then how do we come to know? One common misperception holds that vision springs directly from the eyes. True, the eyes, ears, and skin bombard us with a constant stream of information. But sensory input is only the first step in a complex journey towards arriving at our understanding of the world. As neuroscientist V.S. What's the Significance? For neurologists like Ramachandran, "the question of how neurons encode meaning and evoke all the semantic associations of an object is the holy grail of neuroscience, whether you are studying memory, perception, art, or consciousness." This is because brain damage is highly specialized. John developed a blood clot in a vein in his leg, which traveled to his cerebral arteries, causing a stroke. There was nothing wrong with his vision or hearing. In John's case, the "wire between the vision and the amagydala," which regulates emotion, had been cut. Dan Honan contributed to this article.

6 Ways To “Riff” Daily Artists, musicians, comics, speakers, trainers, athletes, performers all do it-they “RIFF”. That “rapid energetic often improvised verbal or non verbal outpouring especially one that is part of a performance”. Most of us remember “Riff’s” of great rock, jazz and yes classical musicians, bands and performers, we listen to and are fans of. What we love about them is the spontaneity, take, variation and interpretation of their passion. Who doesn’t know Deep Purple’s memorable riff “Smoke on the Water” played by Ritchie Blackmore, or Jimmy Hendricks riff in “Foxy Lady“? I don’t know about you, but I love the whole idea of “riffing”! Here’s 6 Ways to “Riff” daily Be Spontaneous Have your daily plan and goals but let things lead you off the beat and path for short busrts that are unexpected or unscheduled. Improvise How many things that we plan simply don’t go as scripted? Experiment Who doesn’t want to be happier? Be Adventuresome Seek Out Inspiration Be an Impresario Author:

An Egg It was a car accident. Nothing particularly remarkable, but fatal nonetheless. You left behind a wife and two children. It was a painless death. The EMTs tried their best to save you, but to no avail. And that's when you met me. "What... what happened?" "You died," I said, matter-of-factly. "There was a... a truck and it was skidding..." "Yup." "I... "Yup. You looked around. "More or less," I said. "Are you God?" "Yup." "My kids... my wife," you said. "What about them?" "Will they be alright?" "That what I like to see," I said. You looked at me with fascination. "Don't worry," I said. "Oh," you said. "Neither," I said. "Ah," you said. "All the religions are right in their own way," I said. You followed along as we strolled in the void. "So what's the point, then?" "Not so!" I stopped walking and took you by the shoulders. "You've been a human for the last 34 years, so you haven't stretched out yet and felt the rest of your immense consciousness. "Oh, lots. "Wait, what?" "Oh sure!" "Sure.

The Neuroscience of Barbie In science fiction and fantasy tales, there is a long running fascination with the idea of dramatically diminishing or growing in stature. In the 1989 classic, Honey, I Shrunk the Kids, Rick Moranis invents a device which accidentally shrinks both his own and the neighbor’s children down to a quarter-of-an-inch tall. Preceding this by more than 100 years, Lewis Carroll wrote about a little girl who, after tumbling down a rabbit hole, nibbles on some cake and then grows to massive proportions. Nearly 300 years ago, Jonathan Swift described the adventures of Gulliver while on the island of Lilliputan, on which he is a giant, and then on the island of Brobdingnag, where everyone else is a giant. These kinds of experiences, however, have been limited to the world of fictional stories. Or at least, they were mythical until recently. In order to make participants feel ownership over these false bodies, researchers employed a technique well known to those interested in body perception.

The 50 best apps for children | Technology | The Observer When Apple unveiled its iPad in January 2010, the idea of handing over a touchscreen gadget costing at least £429 to a sticky-fingered child seemed ridiculous. Two years later, tablets – and smartphones – are now well established as pass-on devices, with an increasing number of apps available for children of all ages. In July, Disney commissioned a survey of 2,000 British parents who owned an app-capable device and found that 75% share them with their children; 56% said they had downloaded an app at the request of their kids; and 37% considered apps to be an "integral" part of their family life. There are hundreds of developers making apps for kids, from games and story books to maths and phonics apps. Pretty much every big brand in the world of children's entertainment is now involved in apps, including Disney, Nickelodeon, Penguin, Mattel and Moshi Monsters, as well as individual characters and TV shows such as Bob the Builder, Peppa Pig, In the Night Garden and Dr Seuss.

From Sci-Fi to Sci-Fact: The New Frontier of Neuroscience | Dr. Alfredo Quinones-Hinojosa With rendition switcher Question: What is the most exciting part of brain science for you? Alfredo Quinones-Hinojosa: I think the most exciting part of what I do right now is exactly the fact that what we are doing is giving patients new hope; that we're looking at a disease, which is brain cancer, that people have looked at for hundreds of years and we have not been able to understand, and we're finally perhaps beginning to scratch the surface, we're beginning to look at an old disease with new eyes. And what new eyes are those is the fact that within brain cancer there may be a small population of cells that have the ability to recreate the same type of cancer, which means that despite the fact that we can actually do a perfect surgical resection and we can take a lot of these tumors out, these patients eventually continue to progress, perhaps because we're leaving those small little cells back there that are able to recreate the whole tumor. Recorded on: July 2, 2008

Nobel Laureate Examines Neuroaesthetics and Broken Relationship with Vienna Editor's note: SPIEGEL ONLINE has also published an interview with Eric Kandel about his new book, which can be read here. When Auguste Rodin visited Vienna in June 1902, art critic Berta Zuckerkandl invited him to spend an afternoon in her famous salon. As the hostess later recalled, the great French sculptor and Austrian artist Gustav Klimt had seated themselves beside two remarkably beautiful young women -- Rodin gazing enchantingly at them. Klimt slowly nodded and responded with a single word: "Austria!" This is the opening scene in New York neuroscientist Eric Kandel's exploration of his native Vienna, a tome entitled "The Age of Insight: The Quest to Understand the Unconscious in Art, Mind, and Brain, from Vienna 1900 to the Present," published this spring in English and this month in German. Sigmund Freud became the quintessential figure of this movement. Exile During Holocaust The Kandels were Jews, and they had to leave their apartment. Brave New World of Neuroaesthetics

List of unsolved problems in philosophy This is a list of some of the major unsolved problems in philosophy. Clearly, unsolved philosophical problems exist in the lay sense (e.g. "What is the meaning of life?", "Where did we come from?" Aesthetics[edit] Essentialism[edit] In art, essentialism is the idea that each medium has its own particular strengths and weaknesses, contingent on its mode of communication. Art objects[edit] This problem originally arose from the practice rather than theory of art. While it is easy to dismiss these assertions, further investigation[who?] Epistemology[edit] Epistemological problems are concerned with the nature, scope and limitations of knowledge. Gettier problem[edit] In 1963, however, Edmund Gettier published an article in the periodical Analysis entitled "Is Justified True Belief Knowledge?" In response to Gettier's article, numerous philosophers have offered modified criteria for "knowledge." Infinite regression[edit] Molyneux problem[edit] Münchhausen trilemma[edit] Qualia[edit] Ethics[edit]

Brain May ‘See’ More Than the Eyes, Study Indicates Vision may be less important to “seeing” than is the brain’s ability to process points of light into complex images, according to a new study of the fruit fly visual system currently published in the online journal Nature Communications. University of Virginia researchers have found that the very simple eyes of fruit fly larvae, with only 24 total photoreceptors (the human eye contains more than 125 million), provide just enough light or visual input to allow the animal’s relatively large brain to assemble that input into images. “It blows open how we think about vision,” said Barry Condron, a neurobiologist in U.Va.’s College of Arts & Sciences, who oversaw the study. “This tells us that visual input may not be as important to sight as the brain working behind it. In this case, the brain apparently is able to compensate for the minimal visual input.” The animals apparently saw the writhing motion and were attracted to it, willingly traveling toward it.