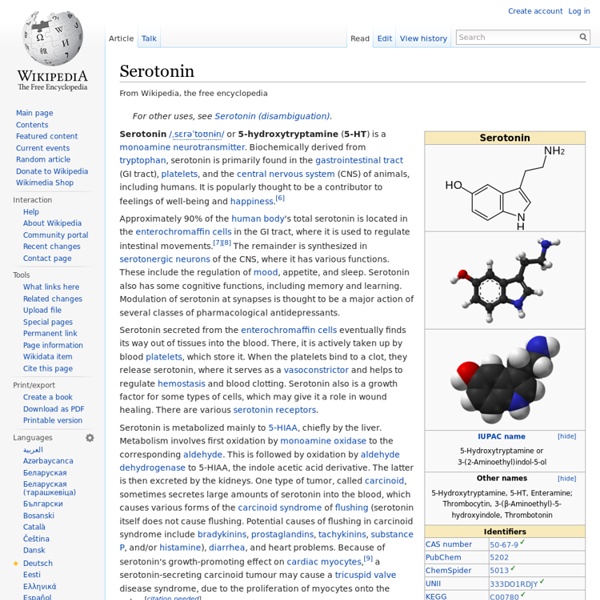 Serotonin /ˌsɛrəˈtoʊnɨn/ or 5-hydroxytryptamine (5-HT) is a monoamine neurotransmitter. Biochemically derived from tryptophan, serotonin is primarily found in the gastrointestinal tract (GI tract), platelets, and the central nervous system (CNS) of animals, including humans. It is popularly thought to be a contributor to feelings of well-being and happiness.[6] Serotonin secreted from the enterochromaffin cells eventually finds its way out of tissues into the blood. There, it is actively taken up by blood platelets, which store it. When the platelets bind to a clot, they release serotonin, where it serves as a vasoconstrictor and helps to regulate hemostasis and blood clotting. In addition to animals, serotonin is found in fungi and plants.[10] Serotonin's presence in insect venoms and plant spines serves to cause pain, which is a side-effect of serotonin injection. Functions[edit] Receptors[edit] Gauge of food availability (appetite)[edit] Effects of food content[edit] [edit] Related:  Pineal Gland (Bull.S. New Age Meditation) • Health & Diet

Conifer cone The male cone (microstrobilus or pollen cone) is structurally similar across all conifers, differing only in small ways (mostly in scale arrangement) from species to species. Extending out from a central axis are microsporophylls (modified leaves). Under each microsporophyll is one or several microsporangia (pollen sacs). The female cone (megastrobilus, seed cone, or ovulate cone) contains ovules which, when fertilized by pollen, become seeds. The female cone structure varies more markedly between the different conifer families, and is often crucial for the identification of many species of conifers. Female cones of the conifer families[edit] Pinaceae cones[edit] Intact and disintegrated fir cones The members of the pine family (pines, spruces, firs, cedars, larches, etc.) have cones that are imbricate (that is, with scales overlapping each other like fish scales). Araucariaceae cones[edit] Podocarpaceae cones[edit] Berry-like Podocarpus cone Cupressaceae cones[edit] Sciadopityaceae cones[edit]

Evolutionary Psychiatry: Carbs and Serotonin, A Connection After All? A few weeks ago in Do Carbs Keep You Sane, I reported from a couple papers that disagreed with the textbook theory that a high carb, low protein and low fat diet would increase tryptophan in the brain. The Wurtmans from MIT have designed a whole pharmacologic diet around this theory, so it was interesting to read the rebuttal, especially since the rebuttal included data from Dr. Judith Wurtman's own papers. In short, the theory goes that carbohydrate ingestion stimulates insulin production, which in turn causes protein to be driven out of the bloodstream and into the cells. If we follow the lines of this theory, a high protein diet will increase the amount of other amino acids and increase the competition for the receptor, leaving tryptophan a loser and the brain relatively "low" in serotonin. Except in nutrition, nothing is ever simple. But Mr. High glycaemic index and glycaemic load meals increase the availability of tryptophan in healthy volunteers The results?

Melatonin Melatonin The hormone can be used as a sleep aid and in the treatment of sleep disorders. It can be taken orally as capsules, tablets, or liquid. It is also available in a form to be used sublingually, and there are transdermal patches. There have been few clinical trials, particularly long-term ones, in the use of melatonin in humans. Discovery[edit] Biosynthesis[edit] Melatonin biosynthesis involves four enzymatic steps from the essential dietary amino acid tryptophan, which follows a serotonin pathway. In bacteria, protists, fungi, and plants melatonin is synthesized indirectly with tryptophan as an intermediate product of the shikimic acid pathway. Regulation[edit] In vertebrates, melatonin secretion is regulated by norepinephrine. It is principally blue light, around 460 to 480 nm, that suppresses melatonin,[24] proportional to the light intensity and length of exposure. Animals[edit] Plants[edit] Functions[edit] Circadian rhythm[edit] Antioxidant[edit] Immune system[edit] Medical uses[edit]

10 Superfoods Healthier Than Kale In the world of marketing, image is everything. If you’re James Franco or Roger Federer or Taylor Swift, your name and face can be used to sell anything from phones to watches to perfume—even if you’re not necessarily famous for the your tech-savvy, your promptness, or the way you smell. In the food world, the biggest celebrity of all might be kale—the Shakira of salads, the Lady Gaga of leafy greens. It’s universally recognized that kale anything—kale chips, kale pesto, kale face cream—instantly imparts a health halo. Even 7-Eleven is making over its image by offering kale cold-pressed juices. Still, kale’s actually not the healthiest green on the block. SUPERFOOD #10 Collard Greens Nutrition Score: 62.49 A staple vegetable of Southern U.S. cuisine, collard greens also boast incredible cholesterol-lowering benefits — especially when steamed. SUPERFOOD #9 Romaine Lettuce Nutrition Score: 63.48 SUPERFOOD #8 Parsley Nutrition Score: 65.59 SUPERFOOD #7 Leaf Lettuce Nutrition Score: 70.73 Chard.

Pineal gland The pineal gland, also known as the pineal body, conarium or epiphysis cerebri, is a small endocrine gland in the vertebrate brain. It produces melatonin, a serotonin derived hormone, which affects the modulation of sleep patterns in both seasonal and circadian rhythms.[1][2] Its shape resembles a tiny pine cone (hence its name), and it is located in the epithalamus, near the center of the brain, between the two hemispheres, tucked in a groove where the two halves of the thalamus join. Nearly all vertebrate species possess a pineal gland. The gland has been compared to the photoreceptive, so-called third parietal eye present in the epithalamus of some animal species, which is also called the pineal eye. Structure[edit] The pineal gland is reddish-gray and about the size of a grain of rice (5–8 mm) in humans, located just rostro-dorsal to the superior colliculus and behind and beneath the stria medullaris, between the laterally positioned thalamic bodies. Blood supply[edit] Histology[edit]

Best Candy - Foods That Lift Your Mood Dark chocolate perks up your brain in four different ways; it boosts serotonin and endorphins, the feel-good hormones; it’s rich in B vitamins and magnesium, which are noted cognitive boosters; it contains small amounts of caffeine, which helps with short-term concentration; and it contains theobromine, a stimulant that delivers a different sort of buzz, minus the espresso shakes. As if that’s not enough, it’s also one of our 10 Libido-Lifting Foods (go ahead and click, no one’s watching and it’s SFW). The catch: most treats labeled “dark chocolate” have had the healthy nutrients processed out of them. A product like Hershey’s Special Dark is made with alkalized, or “Dutch” chocolate, which destroys up to 75% of the healthy ingredients in the chocolate. Look for a bar that’s labeled “72% cacao” or above, even if the calorie count is a bit higher. Not That! Hershey's Special Dark Per serving (one bar): 190 calories, 12 g fat, 8 g saturated fat, 2 g protein, 21 g sugar

Spanish Cave Neanderthal Eating Habits not as Simple as Thought The remains of Neanderthals found in the El Sidron cave of Northern Spain indicate they ate far more than meat, study shows. An international team of researchers, led by the Universitat Autònoma de Barcelona and the University of York, has provided the first molecular evidence that Neanderthals not only ate a range of cooked plant foods, but also understood its nutritional and medicinal qualities. Until recently Neanderthals, who disappeared between 30,000 and 24,000 years ago, were thought to be predominantly meat-eaters. However, evidence of dietary breadth is growing as more sophisticated analyses are undertaken. Researchers from Spain, the UK and Australia combined pyrolysis gas-chromatography-mass spectrometry with morphological analysis of plant microfossils to identify material trapped in dental calculus (calcified dental plaque) from five Neanderthals from the north Spanish site of El Sidrón. Ten samples of dental calculus from five Neanderthals were selected for this study.