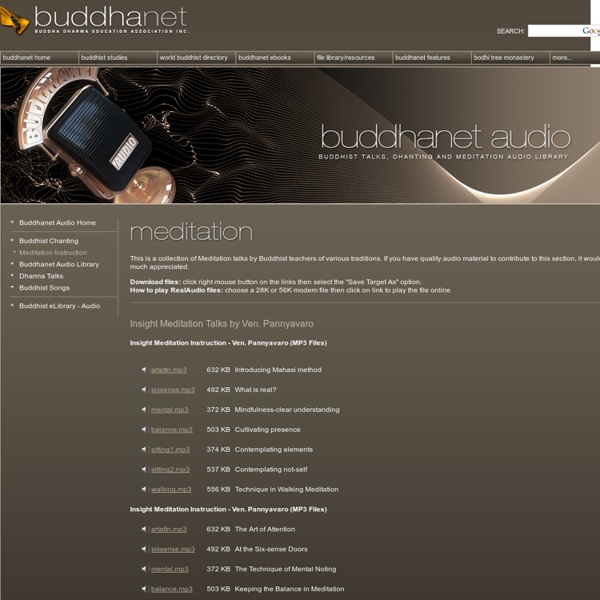 Guided Meditations with Malcolm Huxter Body Scan gives instructions on bringing awareness to bodily sensations. For the most part this exercise is relaxing. Progressive Relaxation gives guidance for a common muscle tension and release exercise often used for stress management. Calming the body with the breath, describes a mindfulness of breath exercise coupled with relaxation. Cultivating peace and joy with the breath, is an extension of the track "Calming the body with the breath". Mindful Standing and Walking, provides simple instructions for mindful standing and walking. Mindfulness of Breath gives instructions for mindfulness of breath, as is it experienced as movement in the abdomen. Mindfulness of sound and thought, firstly instructs on how to use sound as an object of meditation then asks the listener to shift attention to thoughts. Open awareness. A guided Loving kindness meditation.

How to Meditate The Vipassana Dhura Meditation Society has an excellent guide to meditation that has been copied below. We've also compiled a page of videos, courtesy of Howcast and The Emotion Machine, which you may find helpful. Note: These instructions are drawn from the vipassana traditions of Mahasi Sayadaw and Chao Khun Bhavanapirama Thera. Contents This article offers step-by-step instruction for nine insight meditation exercises, as well as a detailed explanation of mindful eating, hints on dealing with problems such as wandering mind, sleepiness, disturbing mental images, unpleasant emotions, and more. The following exercises are not necessarily listed in order of difficulty. To start, choose one or two exercises and practice them daily. Although these Buddhist meditation exercises come from the traditions of the Burmese teacher Mahasi Sayadaw and the Thai teacher Chao Khun Bhavanapirama Thera, you don't have to be a Buddhist to practice them. A Suitable Place Clothing Sitting Styles Mental Noting

Karaniya Metta Sutta: The Discourse on Loving-kindness 1. "He who is skilled in (working out his own) well being, and who wishes to attain that state of Calm (Nibbana) should act thus: he should be dexterous, upright, exceedingly upright, obedient, gentle, and humble. 2. "Contented, easily supportable, with but few responsibilities, of simple livelihood, controlled in the senses, prudent, courteous, and not hanker after association with families. 3. "Let him not perform the slightest wrong for which wise men may rebuke him. 4.& 5. 6. 7. 8. 9. 10.

30 Challenges for 30 Days Did you know that it takes 30 days to form a new habit? The first few days are similar as to how you would imagine the birth of a new river. Full of enthusiasm it gushes forth, only to be met by strong obstacles. So, take a moment to reflect on the question ‘Who do I want to be in 5 years?’ Check out this short TED talk first to get inspired: Now pick one or more challenges and stick with them! However, be cautioned, picking too many challenges at the same time can easily result in a failure of all of them. #1 Write a I-Like-This-About-You note/text/email each day for someone (Easy) This is the perfect way to let someone else know you care. #2 Talk to one stranger each day (Hard) This is a great one to cure approaching anxiety. #3 Take one picture each day (Hard) This one gets harder nearing the end of the challenge because at one point you will run out of the easy shots. #4 Re-evaluate one long-held belief each day (Intermediate) #5 Take a 30 minute walk each day (Easy) We recommend:

How to Meditate: What you didn’t know about Empty Mind Techniques and your bliss Sow a thought and you reap an act; Sow an act and you reap a habit; Sow a habit and you reap a character; Sow a character and you reap a destiny. Empty mind meditation is one of the most popular and yet misunderstood types of meditation. I love it because it trains you to still (or control, depending on what you want) your thoughts and emotions. Why should this matter? Empty mind meditation is also a neutral form – it is free of all the different teachings and belief systems, so everyone can practice it without getting sucked into something they might not want to. I’ve been asked a few times about my favourite meditations, so I’ll describe it here, with a few personal variations. If you’re an experienced meditator, you can skip the next few sections and get straight to the goods. Benefits of empty mind meditation I have used empty mind meditation to great effect; it was one of the most important practices I used to get out of extreme negativity. Continued practice of meditation: Posture

Eckhart Tolle Eckhart Tolle (/ˈɛkɑrt ˈtɒlə/ EK-art TO-lə; German pronunciation: [ˈɛkaʁt ˈtɔlə], born Ulrich Leonard Tolle on February 16, 1948) is a German-born resident of Canada,[1] best known as the author of The Power of Now and A New Earth. In 2011, he was listed by the Watkins Review as the most spiritually influential person in the world.[2] In 2008, a New York Times writer called Tolle "the most popular spiritual author in the United States".[3] Tolle has said that he was depressed for much of his life until he underwent, at age 29, an "inner transformation". He then spent several years wandering and unemployed "in a state of deep bliss" before becoming a spiritual teacher. Later, he moved to North America where he began writing his first book, The Power of Now, which was published in 1997[4] and reached the New York Times Best Seller lists in 2000.[5] Tolle settled in Vancouver, Canada, where he has lived for more than a decade. Early life and education[edit] Inner transformation[edit]

25 Beautifully Illustrated Thought-Provoking Questions A question that makes you think is worth asking… At the cusp of a new day, week, month, or year, most of us take a little time to reflect on our lives by looking back over the past and ahead into the future. We ponder the successes, failures and standout events that are slowly scripting our life’s story. If you would like to maximize the benefits of self reflection, our new sister site, Thought Questions, is for you. Remember, these questions have no right or wrong answers. Here’s a sample of 25 recent thought questions posted on the site: Thought Questions is updated daily. Title photo by: Oberazzi For all other photo credits please refer to ThoughtQuestions.com Related 6 Questions that Will Save Your Relationships When you don't ask sincere questions and talk it out, there's a lot of important stuff that ends up never getting said. May 21, 2014 In "Life" 20 Questions You Should Ask Yourself Every Sunday July 24, 2008 In "Hacks" 40 Photo-Illustrated Questions to Refocus Your Mind

A Little Meditation Goes a Long Way I consider myself something of a prospective meditator—meaning that a serious meditation practice is always something I’m about to start… next week. So for years, I’ve been making a mental note of new studies showing that meditation can literally change our brain structure in ways that might boost concentration, memory, and positive emotions. Jacob Wackerhausen The results seem enticing enough to make anyone drop into the full lotus position—until you read the fine print: Much of this research involves people who have meditated for thousands of hours over many years; some of it zeroes in on Olympic-level meditators who have clocked 10,000 hours or more. Pretty daunting. Well, a new study offers some hope—and makes the benefits of meditation seem within reach even for a novice like me. The researchers tracked 16 people who were participating in the Mindfulness-Based Stress Reduction (MBSR) program, the training program developed more than 30 years ago by Jon Kabat-Zinn.

Meniere's Australia: Meniere's Disease Resource and Information Centre A disease of the inner ear Meniere’s disease is a condition in which there is an excess of fluid in the inner ear. The excess fluid disturbs the ear’s balance and hearing mechanisms and produces a range of symptoms: vertigo (a form of dizziness where your surroundings appear to spin) tinnitus (an abnormal ringing noise inside the ear) fluctuating hearing loss a feeling of pressure or fullness in the ear due to fluid build-up Attacks of vertigo usually occur in clusters with varying periods of remission (from days to years) between attacks. Tinnitus, distorted hearing and pressure in the ear often occur in conjunction with the vertigo. Estimates vary but around 90% of people with Meniere’s have the disease in only one ear when first diagnosed. Who gets Meniere’s? Meniere’s disease affects one in every 600 Australians. Treatment Currently there is no known medical cure for Meniere’s.

Ramana Maharshi Ramana Maharshi /ˈrʌmənə məˈhɑrʃi/ (1879–1950) is widely acknowledged as one of the outstanding Indian gurus of modern times. He was born as Venkataraman Iyer, in Tiruchuli, Tamil Nadu [note 1] Tamil Nadu (South India). His first years were spent in solitude, but his stillness and his appearance as a sanyassin soon attracted devotees. In later years, he responded to questions, but always insisted that silence was the purest teaching. His verbal teachings flowed "from his direct knowledge that consciousness was the only existing reality." In later years, a community grew up around him, where he was available twenty-four hours a day to visitors. Venkataraman was renamed Bhagavan Sri Ramana Maharshi by one of his earliest followers, Ganapati Muni. Biography[edit] Early years (1879–1896)[edit] Temple of Tiruchuli, Tamil Nadu Family background[edit] Childhood (1879–1895)[edit] Awakening (1895–1896)[edit] After leaving Scott's Middle School, Venkataraman went to the American Mission High School.

Best 101 Entrepreneurship Quotes Ever · 14 Clicks I’m a big fan of quotes. I could read them all day long. Some quotes can shift your entire mindset on something while others are just nice to bring up in conversations. I’ve spent the last two years (off and on) compiling 101 of my favorite entrepreneurship quotes around success, failure, leadership, wisdom, humor, money, practicality, motivation, and a smattering of entrepreneurial proverbs. Success Quotes Failure Quotes “Failure defeats losers, failure inspires winners.” Leadership Quotes “Leaders don’t force people to follow, they invite them on a journey.” Wisdom Quotes “The whole problem with the world is that fools and fanatics are always so certain of themselves, but wiser people so full of doubts.” Humorous Quotes “I think it’s wrong that only one company makes the game Monopoly.” Money Quotes “Formal education will make you a living. Practical Quotes