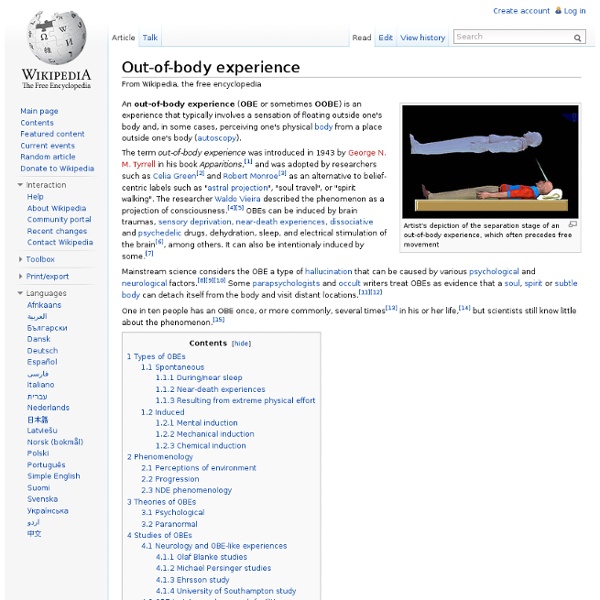 Artist's depiction of the separation stage of an out-of-body experience, which often precedes free movement An out-of-body experience (OBE or sometimes OOBE) is an experience that typically involves a sensation of floating outside one's body and, in some cases, perceiving one's physical body from a place outside one's body (autoscopy). The term out-of-body experience was introduced in 1943 by George N. M. Science currently considers the OBE a type of hallucination that can be caused by various psychological and neurological factors.[6][7][8] Some parapsychologists and occult writers treat OBEs as evidence that a soul, spirit or subtle body can detach itself from the body and visit distant locations.[9][10] One in ten people have an OBE once, or more commonly, several times[11] in their life,[12] but scientists still know little about the phenomenon.[13] Spontaneous[edit] During/near sleep[edit] Near-death experiences[edit] Another form of spontaneous OBE is the near-death experience (NDE).

Astral Dynamics | About Robert Bruce Personal Story When I discovered spirituality in my childhood, there were no books on the subject readily available to me. There was no Amazon.com, online websites, or internet forums for chatting. I was on my own, except for the occasional meditation circle in a local city. The truth is, I was desperate to learn anything for a long period of time. In a sense, this was a gift, because it forced me to develop my psychic abilities through independent hard work. The lack of information out there enabled me to avoid "analysis paralysis" and get right to the core of the evolutionary process, so I could immediately start accessing the Greater Reality. Today as an adult, I've helped thousands of people around the world—who are just like you—learn to enliven their psychic powers and explore their mysticism, through my best-selling books, international seminars, and this very resource, Astral Dynamics.

Recommended Readings Out-of-Body Experiences: In Search of the Truth January 14, 2013 “...as I turned the corner into the square and saw the workers still struggling with the tree, I felt elated. In many ways it was a mundane experience with no great significance to it, and yet there it was again—a simple confirmation that our perceptions may not be limited to the realm of our physical senses, that there is more to consciousness than what the dominant paradigm suggests.” From the Journal of the Institute of Noetic Sciences, Noetic.org. By Graham Nicholls “Nicholls is a British author of two books on out-of-body experiences, which he has explored for nearly 25 years. It was approaching Christmas, and the medieval city of Tallinn, in the northern European country of Estonia, had been covered with snow for some time. I hadn’t visited the square for awhile and was surprised to see a group of workers hoisting a large fir tree into place at the center of the open area across from the old town hall. Olaf Blanke: The Media, OBEs, and NDEs Completing the OBE Puzzle

Who Is Robert Monroe? TITLE: Who Is Robert Monroe? AUTHOR: Duv Robert Monroe, founder of the Monroe Mind Research Institute in Virginia, began studying altered states of consciousness in 1958. At that time, Monroe was a succesful businessman, having graduated from Ohio State University with a degree in engineering, and a second one in journalism. In his first book, Monroe describes an oobe as, "1. As he began his work, Monroe started experiencing a particular altered state of consciousness. Throught the first book characteristics of the second body become more apparent. Another characteristic of the second body is that it is visible under some circumstances, and so Monroe concludes it must thus possess some ability to radiate or reflect light. The sense of touch is also present in the second body, and it operates much in the same way as it does in the physical body. Many observations were made concerning a cord that seems to connect the two bodies, one of them being that communication travels both ways.

Edgar Cayce's near-death experiences The following is the only waking description of his journey in the trance state, taken verbatim from comments he made at a public lecture. Within his descriptions I have tagged corresponding elements to the NDE: "I see myself as a tiny dot out of my physical body, which lies inert before me." "I find myself oppressed by darkness and there is a feeling of terrific loneliness." "Suddenly, I am conscious of a white beam of light, knowing that I must follow it or be lost." "As I move along this path of light I gradually become conscious of various levels upon which there is movement." "Upon the first levels there are vague, horrible shapes, grotesque forms such as one sees in nightmares." "Passing on, there begins to appear on either side misshapen forms of human beings with some part of the body magnified." "Again there is change and I become conscious of gray-hooded forms moving downward. "As I pass on, there is more light and movement in what appear to be normal cities and towns.

ah xd interesting. i dont think i've ever had an oob, atleast not enough to call it one i guess. Maybe i'll try some things next time i trip. by samturne Jan 9

I have had numerous OOB experiences. Some under the influence of various hallucinogens such as yopo, DMT, LSD, Ibogaine and even very strong cannabis, but also using certain lucid dreaming techniquesand once after a very serious injury. The most powerful however was with the DMT and the Ibogaine: and here: by ostarr Jan 9

Depends on what is meant by out of body experiance, but I think I have something like it on shrooms, and in dreams and once immediatly after wakeing up....I attributeit to psychological and not spiritual factors, when I describe it to myself. by makeupthetruth Jan 9

has anyone here achieved this? by samturne Jan 8