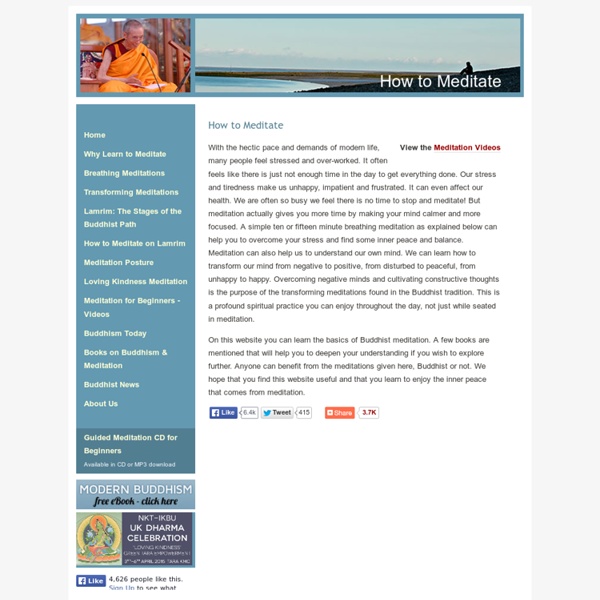 With the hectic pace and demands of modern life, many people feel stressed and over-worked. It often feels like there is just not enough time in the day to get everything done. Our stress and tiredness make us unhappy, impatient and frustrated. It can even affect our health. We are often so busy we feel there is no time to stop and meditate! But meditation actually gives you more time by making your mind calmer and more focused.

Kundalini Yoga - FREE On-Line Training. Practicing at Home We have compiled the following list of on-line resources to help all our students with additional practice and background material. Introduction to Kundalini Yoga - on this Web site. The Tibetan Book of Living and Dying In his foreword to the book, the 14th Dalai Lama says: In this timely book, Sogyal Rinpoche focuses on how to understand the true meaning of life, how to accept death, and how to help the dying, and the dead...Death and dying provide a meeting point between the Tibetan Buddhist and modern scientific traditions. I believe both have a great deal to contribute to each other on the level of understanding and practical benefit. Sogyal Rinpoche is particularly well placed to facilitate this meeting; having been born and brought up in the Tibetan tradition, he has received instructions from some of our greatest Lamas. Having also benefited from a modern education and lived and worked in the West, he has become well acquainted with Western ways of thought. Conception and writing[edit]

10 Yoga Poses to Fight Depression and Anxiety The mind, body and spirit are all connected and when a person suffers from mild depression or anxiety, the body is out of balance. Yoga is a series of stretches that helps bring balance to the body; not just focusing on the body’s health, but also on the mind and spirit. Always consult a physician or counsellor if you are having ongoing feelings of depression or anxiety and before trying any new exercise program. learn tai chi We know you want to learn tai chi and it's very tempting to just say 'Start - now - today! And point you to qigong exercises and let you read about the fundamentals and start to learn some individual exercises. It's important to remember that any exercise done the wrong way has the potential to cause damage. Tai chi is no different in that respect.

Emerald Tablet An imaginative 17th century depiction of the Emerald Tablet from the work of Heinrich Khunrath, 1606. The Emerald Tablet, also known as the Smaragdine Table, or Tabula Smaragdina, is a compact and cryptic piece of Hermetica reputed to contain the secret of the prima materia and its transmutation. It was highly regarded by European alchemists as the foundation of their art and its Hermetic tradition. The original source of the Emerald Tablet is unknown. Although Hermes Trismegistus is the author named in the text, its first known appearance is in a book written in Arabic between the sixth and eighth centuries. The text was first translated into Latin in the twelfth century. Tyohar yohar started his adventure when he traveled to Asia at the age of 21. He got fascinated by the underground gypsy lifestyle and has remained a traveler at heart ever since. Traveling and living mostly in India, Thailand and Japan he experienced many different cultures and the wild psychedelic underground movement which had a strong impact on him.

The Art of Living: Vipassana Meditation The following text is based upon a talk given by Mr. S.N. Goenka in Berne, Switzerland. Everyone seeks peace and harmony, because this is what we lack in our lives. From time to time we all experience agitation, irritation, dishar­mony. And when we suffer from these miseries, we don't keep them to ourselves; we often distribute them to others as well.

12 Great Reasons To Start Alternate Nostril Breathing “I rest well. I sleep peacefully, and I awaken with joy” Louise Hay Your nose is exceptionally clever. African-American Civil Rights Movement (1955–1968) The African-American Civil Rights Movement or 1960s Civil Rights Movement encompasses social movements in the United States whose goals were to end racial segregation and discrimination against black Americans and to secure legal recognition and federal protection of the citizenship rights enumerated in the Constitution and federal law. This article covers the phase of the movement between 1954 and 1968, particularly in the South. A wave of inner city riots in black communities from 1964 through 1970 undercut support from the white community. The emergence of the Black Power movement, which lasted from about 1966 to 1975, challenged the established black leadership for its cooperative attitude and its nonviolence, and instead demanded political and economic self-sufficiency. During the same time as African Americans were being disenfranchised, white Democrats imposed racial segregation by law. Violence against blacks increased, with numerous lynchings through the turn of the century.

Heinrich Cornelius Agrippa Life[edit] Agrippa was born in Cologne on 15 September 1486. In 1512, he taught at the University of Dole in the Free County of Burgundy, lecturing on Johann Reuchlin's De verbo mirifico; as a result, Agrippa was denounced, behind his back, as a "Judaizing heretic". Agrippa's vitriolic response many months later did not endear him to the University. The Dalai Lama - At Home in Exile by David Turnley - The Digital Journalist Dirck Halstead photographs and videos by Dirck Halstead Categories Photography Video Pages About Dirck

7 Kundalini Yoga Postures to Clear the Chakras “Men of great knowledge actually found out about the chakras – their workings, their petals, their sounds, their infinity, their co-relationship, their powers. They found that the life of a human is totally based on these chakras. They developed into a whole science.