Meditation - Its not what you think 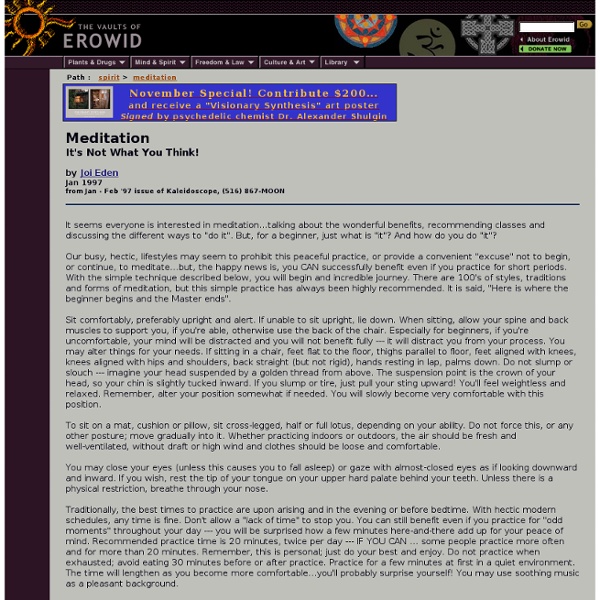 It seems everyone is interested in meditation...talking about the wonderful benefits, recommending classes and discussing the different ways to "do it". But, for a beginner, just what is "it"? And how do you do "it"? Our busy, hectic, lifestyles may seem to prohibit this peaceful practice, or provide a convenient "excuse" not to begin, or continue, to meditate...but, the happy news is, you CAN successfully benefit even if you practice for short periods. With the simple technique described below, you will begin and incredible journey. There are 100's of styles, traditions and forms of meditation, but this simple practice has always been highly recommended. Sit comfortably, preferably upright and alert. To sit on a mat, cushion or pillow, sit cross-legged, half or full lotus, depending on your ability. You may close your eyes (unless this causes you to fall asleep) or gaze with almost-closed eyes as if looking downward and inward.

Concentration Exercise — Concentration is the secret key to a whole world of possibilities, enabling you to keep out distractions and focus on attaining your life goals. In addition it is an absolute prerequisite if you want to learn the art of meditation, as it helps ‘clear the road’ of any mental obstacles. However if anything the average concentration span is decreasing as life gets busier and busier and the world becomes filled with more things to distract and scatter our attention. Here is one very easy-to-learn concentration exercise which was taught to me by my meditation teacher Sri Chinmoy. It can reap tremendous rewards in terms of clarity, productivity and efficiency in your life, and it can be done with just a few minutes practise every day.

Magickal Athenaeum - WikiPagan The Magical Athenaeum is the largest collection of magickal PDF books on the internet, with several hundred files. The resource is maintained by Asiya's Shadows. Books are in the Adobe Portable Document Format (PDF) and may be viewed and printed using Adobe Reader. Magical Athenaeum Paganism & Witchcraft Brain Waves During Meditation Brain Activity During Meditation The brain is an electrochemical organ (machine) using electromagnetic energy to function. Electrical activity emanating from the brain is displayed in the form of brainwaves. They range from the high amplitude, low frequency delta to the low amplitude, high frequency beta.

Using Body Awareness For Deeper Meditation & We The Change, Personal Development for Conscious People I would like to share with you a very powerful meditation technique I use called ‘body awarenes s’. Even though this practice is primarily used during meditation, I have found great use in utilizing body awareness in my every day life as well. For those of you who already have a meditation practice, I highly recommend trying the following steps.

Top five regrets of the dying There was no mention of more sex or bungee jumps. A palliative nurse who has counselled the dying in their last days has revealed the most common regrets we have at the end of our lives. And among the top, from men in particular, is 'I wish I hadn't worked so hard'. Bronnie Ware is an Australian nurse who spent several years working in palliative care, caring for patients in the last 12 weeks of their lives. Transcendental Meditation Transcendental Meditation (TM) refers to a specific form of mantra meditation called the Transcendental Meditation technique,[1] and can also refer to the organizations within the Transcendental Meditation movement and to the movement itself.[1][2] The TM technique and TM movement were introduced in India in the mid-1950s by Maharishi Mahesh Yogi (1918–2008). The Maharishi taught thousands of people during a series of world tours from 1958 to 1965, expressing his teachings in spiritual and religious terms.[3][4] TM became more popular in the 1960s and 1970s, as the Maharishi shifted to a more technical presentation and his meditation technique was practiced by celebrities. At this time, he began training TM teachers and created specialized organizations to present TM to specific segments of the population such as business people and students. History[edit] Among the first organizations to promote TM were the Spiritual Regeneration Movement and the International Meditation Society.

Spirit Vaults : Meditation : The Three Parts of Meditation, Scott Taylor This is a very brief overview of some of my keys to understanding and approaching meditation. Meditation is frequently misnamed. For my purposes, there are actually three parts to the process generically called meditation. The first step is Concentration, the second is Contemplation or Reflection, and the last is Presence. In my view, most teachers of meditation in the West focus on concentration alone and call it meditation. Is meditation the push-up for the brain? (Medical Xpress) -- Two years ago, researchers at UCLA found that specific regions in the brains of long-term meditators were larger and had more gray matter than the brains of individuals in a control group. This suggested that meditation may indeed be good for all of us since, alas, our brains shrink naturally with age. Now, a follow-up study suggests that people who meditate also have stronger connections between brain regions and show less age-related brain atrophy.

Mental Heuristics Page A heuristic is a "rule-of-thumb", advice that helps an AI program or human think and act more efficiently by directing thinking in an useful direction. Some of these heuristics are age-old wisdom, bordering on cliche, but most are actually helpful. If you want something done, do it yourself

Mental State Called Flow A number of sources, most recently ProgrammingOutsideTheCube and the RingerTape page, say that many folk find it takes time to get into a state where work flows. Do you plan to get into flow, does it come upon you more as a kind of inspiration, or is it not necessary for you? Do you use tactics to improve your team's ability to flow? Which particular events disrupt flow the most, and how do you solve them? For me, flow requires both inspiration and expiration, if that makes sense. I need to get out into green places or seasides to drink in what's around me, and then I can breathe that vitality back into my work.

The Five Tibetan Rites - Excercises for Healing By Mary Kurus Copyright Mary Kurus 2001, All Rights Reserved Background In 1985 a book called The Ancient Secret of the Fountain of Youth written by Peter Kelder was published which for the first time fully described an exercise program for "youthing". This is an exercise program used by Tibetan monks to live long, vibrant and healthy lives. In fact, this book states that many have lived longer than most can imagine by following the program often called the "Five Tibetan Rites". plants Louise Harmon June, 2013 Wild Carrot or Poison Hemlock? Several months ago, my brother and I were discussing our mutual love of the woods and the outdoors. Although he has hunted and fished most of his adult life, he admitted that he really didn’t pay too much attention to the wild greens around him.

Meditations: The Inner Science If you want to live a more fulfilled life, first you will want to know your potential, who you really are. Meditation is the route to that knowing. It is the methodology of the science of awareness. The beauty of the inner science is that it enables whoever wants to explore and to experiment within, to do so alone. This eliminates dependence on an outer authority, the need to be affiliated with any organization and the obligation to accept a certain ideology.

Orgone Orgone energy accumulator (with door closed) (with door open) Alternating layers of organic and non-organic materials inside the walls supposedly increase the orgone concentration inside the enclosure relative to the surrounding environment. Reich's theories held that deficits or constrictions in bodily orgone were at the root of many diseases—including cancer—much as deficits or constrictions in the libido could produce neuroses in Freudian theory. Reich founded the Orgone Institute ca. 1942[10] to pursue research into orgone energy after he immigrated to the US in 1939, and used it to publish literature and distribute material relating to the topic for more than a decade.