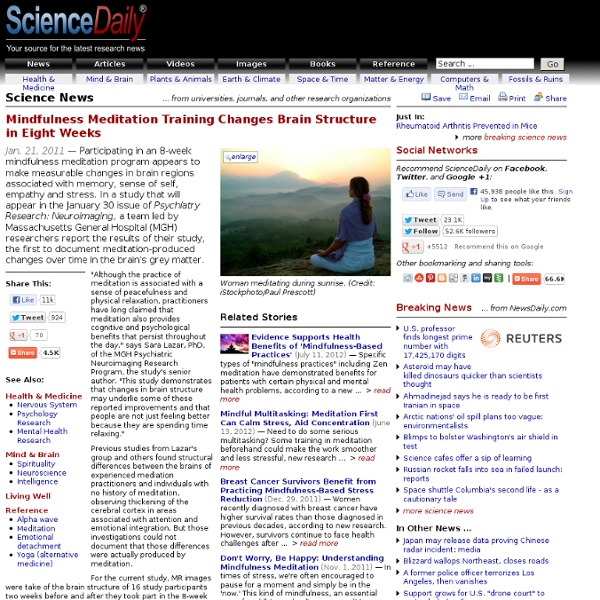 Participating in an 8-week mindfulness meditation program appears to make measurable changes in brain regions associated with memory, sense of self, empathy and stress. In a study that will appear in the January 30 issue of Psychiatry Research: Neuroimaging, a team led by Massachusetts General Hospital (MGH) researchers report the results of their study, the first to document meditation-produced changes over time in the brain's grey matter. "Although the practice of meditation is associated with a sense of peacefulness and physical relaxation, practitioners have long claimed that meditation also provides cognitive and psychological benefits that persist throughout the day," says Sara Lazar, PhD, of the MGH Psychiatric Neuroimaging Research Program, the study's senior author. "This study demonstrates that changes in brain structure may underlie some of these reported improvements and that people are not just feeling better because they are spending time relaxing."

Meditation found to increase brain size Kris Snibbe/Harvard News Office Sara Lazar (center) talks to research assistant Michael Treadway and technologist Shruthi Chakrapami about the results of experiments showing that meditation can increase brain size. People who meditate grow bigger brains than those who don’t. Researchers at Harvard, Yale, and the Massachusetts Institute of Technology have found the first evidence that meditation can alter the physical structure of our brains. Brain scans they conducted reveal that experienced meditators boasted increased thickness in parts of the brain that deal with attention and processing sensory input.

Mindfulness meditation improves connections in the brain When I’m stressed, I listen to a 20-minute mindfulness meditation tape. It always helps me feel calmer and more relaxed. Many meditative practices can do this. But mindfulness meditation is getting a lot of attention because it seems to help with so many physical and psychological problems—like high blood pressure, chronic pain, psoriasis, sleep trouble, anxiety, and depression. It’s also been shown to boost immune function and stop binge eating. No one knows for sure what’s behind these benefits, but physical changes in the brain probably play a role.

Develop a Two-Minute Meditation Habit and Make It Stick No matter what religion you are, if your prayer isn't meditation, you're doing it wrong. No matter what subject you study, if your deep thought, introspection, or focus, isn't a form of meditation, you're doing it wrong. Meditation comes in many forms, and unless you have severe ADHD, everyone does it. It's part of the human condition. Yes, even that kid who loses time playing his video games with almost intense abandon of the rest of the world.

Preparing for Your First Yoga Class Over the years, I’ve had a number of nervous friends ask me how to prepare for a first yoga class. Far and away, the two most frequently asked questions are: “What shoes do I wear?” and “Do I have to chant?” (The answers, by the way, are none and probably not.) What Is Qi (Chi)? What Is Qi (Chi)? Central to Taoist world-view and practice is qi (chi). Qi is life-force -- that which animates the forms of the world. It is the vibratory nature of phenomena -- the flow and tremoring that is happening continuously at molecular, atomic and sub-atomic levels. In Japan it is called “ki,” and in India, “prana” or “shakti.” The ancient Egyptians referred to it as “ka,” and the ancient Greeks as “pneuma.”

Meditation Sharpens the Mind Three months of intense training in a form of meditation known as "insight" in Sanskrit can sharpen a person's brain enough to help them notice details they might otherwise miss. These new findings add to a growing body of research showing that millennia-old mental disciplines can help control and improve the mind, possibly to help treat conditions such as attention deficit hyperactivity disorder (ADHD). "Certain mental characteristics that were previously regarded as relatively fixed can actually be changed by mental training," University of Wisconsin neuroscientist Richard Davidson said. Compassion meditation may boost neural basis of empathy, Emory study finds A compassion-based meditation program can significantly improve a person's ability to read the facial expressions of others, finds a study published by Social Cognitive and Affective Neuroscience. This boost in empathic accuracy was detected through both behavioral testing of the study participants and through functional magnetic resonance imaging (fMRI) scans of their brain activity. "It's an intriguing result, suggesting that a behavioral intervention could enhance a key aspect of empathy," says lead author Jennifer Mascaro, a post-doctoral fellow in anthropology at Emory University. "Previous research has shown that both children and adults who are better at reading the emotional expressions of others have better relationships." The meditation protocol, known as Cognitively-Based Compassion Training, or CBCT, was developed at Emory by study co-author Lobsang Tenzin Negi, director of the Emory-Tibet Partnership.

What is walking meditation? Bodhipaksa Walking meditation is a form of meditation in action. In walking meditation we use the experience of walking as our focus. The Fairy Tale Forest By Ildiko Neer Hungarian photographer Ildiko Neer began operations in 2009. He draws his inspiration from nature, but a special thrill is wood – the sun makes its way through the trees, the sound of leaves and stunning colors of autumn. All this was reflected in the works of photographer. 10 Steps to Enhance Your Natural Telepathic Abilities Galactic Transmission HJ: We all have telepathic abilities, but like any skill, it takes a bit of practice to get good at it and when you don’t use it, it tends to fade. For most of us, our telepathic abilities come in flashes here and there, randomly and without warning.

The Physical and Psychological Effects of Meditation by Steven Donovan, Michael Murphy, and Eugene Taylor When it first appeared, The Physical and Psychological Effects of Meditation drew wide attention within the meditation community and eventually sold out. Its authors, Michael Murphy and Steven Donovan, leaders in the American growth center movement and themselves seasoned meditators, presented their bibliography as a project of the Center for Exceptional Functioning, a newly-founded program within Esalen Institute. In the book, Murphy and Donovan have given us a summary of meditation research that anticipated, among other trends, the rising influence of psychology in general medicine, the increasingly important role of beliefs and values in the healing process, the possibility of a new dialogue emerging between science and religion framed in terms of spiritual experience, and the potential impact that different models of consciousness might have on our understanding of character development.

Meditation May Increase Empathy Previous brain studies have shown that when a person witnesses someone else in an emotional state—such as disgust or pain—similar activity is seen in both people’s brains. This shows a physiological base for empathy, defined as the ability to understand and share another person’s experience. Now research at the University of Wisconsin has used advanced brain images (fMRI, functional magnetic resonance imaging) to show that compassion meditation—a specific form of Buddhist meditation—may increase the human capacity for empathy. In the study, researchers compared brain activity in meditation experts with that of subjects just learning the technique (16 in each group). They measured brain activity, during meditation and at rest, in response to sounds—a woman in distress, a baby laughing, and a busy restaurant—designed to evoke a negative, positive, or neutral emotional response. An increased capacity for empathy, the authors say, may have clinical and social importance.

Buddhist Meditation Meditation is the practice Buddhists know very well. The meaning of meditation or bhavana means “cultivation of the mind” . It is therefore an activity that is determined to increase their understanding and wisdom that are essential for the eradication of ” dukkha “. There are many different Buddhist meditation techniques depending on the tradition and school, for example in the Theravada Visuddhimagga there are listed up to 40 meditation methods. All of them are based on two components called Samatha (calm abiding, peace of mind) and Vipassana (direct knowledge, intuition).