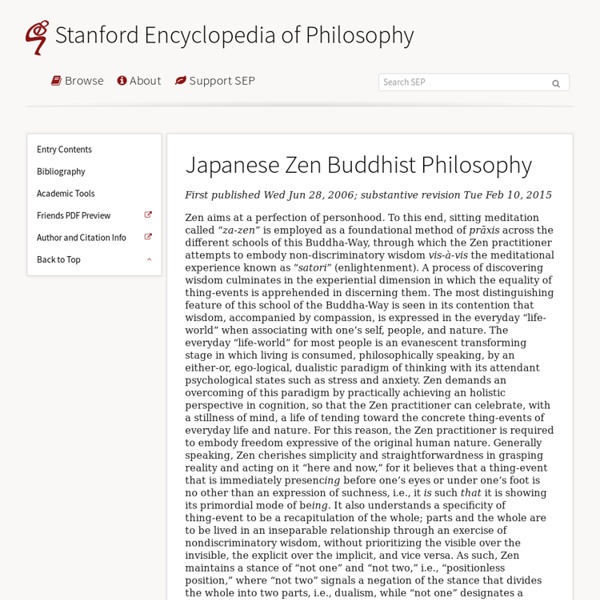 1. The Meaning of the Term Zen The designation of this school of the Buddha-Way as Zen, which means sitting meditation, is derived from a transliteration of the Chinese word Chán. Because the Chinese term is in turn a transliteration of the Sanskrit term dhyāna, however, Zen owes its historical origin to early Indian Buddhism, where a deepened state of meditation, called samādhi, was singled out as one of the three components of study a Buddhist was required to master, the other two being an observation of ethical precepts (sīla) and an embodiment of nondiscriminatory wisdom (prajñā). 2. There are basically two methods utilized in meditation practice in Zen Buddhism to assist the practitioner to reach the above-mentioned goals, together with a simple breathing exercise known as “observation of breath count” (Jpn., sūsokukan); one is the kōan method and the other is called “just sitting” (Jpn., shikan taza), a form of “single act samādhi.” 3. 3.1 The Adjustment of the Body 4. 5. 6. 7. 8.

Essentialsof Buddhism - core concepts The 48 Laws of Power by Robert Greene and Joost Elffers Law 1 Never Outshine the Master Always make those above you feel comfortably superior. Law 2 Never put too Much Trust in Friends, Learn how to use Enemies Be wary of friends-they will betray you more quickly, for they are easily aroused to envy. Law 3 Conceal your Intentions Keep people off-balance and in the dark by never revealing the purpose behind your actions. Law 4 Always Say Less than Necessary When you are trying to impress people with words, the more you say, the more common you appear, and the less in control. Law 5 So Much Depends on Reputation – Guard it with your Life Reputation is the cornerstone of power. Law 6 Court Attention at all Cost Everything is judged by its appearance; what is unseen counts for nothing. Law 7 Get others to do the Work for you, but Always Take the Credit Use the wisdom, knowledge, and legwork of other people to further your own cause. Law 8 Make other People come to you – use Bait if Necessary Law 9 Law 10 Law 11 Law 12 Law 13 Law 14

Fascism Over at Rense.com they have printed a list of the defining characteristics of a fascist state. The list was compiled by Dr. Lawrence Britt, who studied the fascist states of Hitler's Germany, Mussolini's Italy, Franco's Spain, Suharto's Indonesia and several Latin American fascist regimes. He found that all of them had the same 14 characteristics, which are listed below. Every freedom-loving American should read and study this list carefully because we are currently treading the same path. Frankly, this list scares the hell out of me and it should scare you. Each time we demonize our opponents or engage in intolerant actions we lose some freedom and grow closer to fascism. 1. 5. Link to original post