Om Mani Padme Hum: The Meaning of the Mantra in Tibetan Buddhism 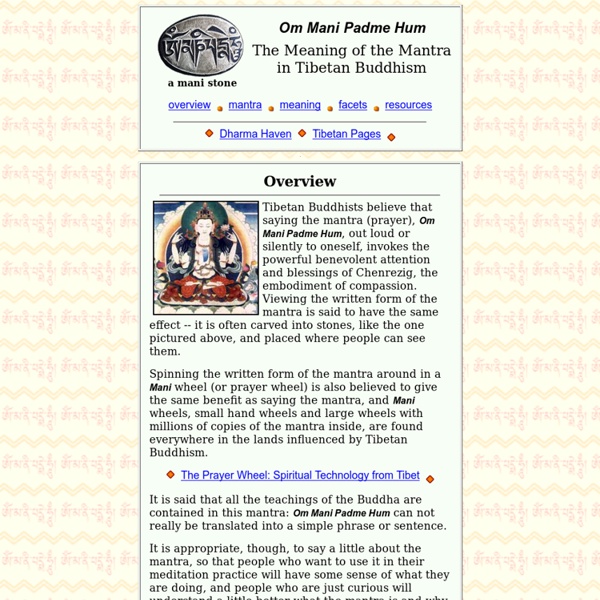 Glimpsing a Few More Facets of the Mantra There are many ways to understand the meaning of the mantra. Here are a few of them: The Transformation of Speech [An excerpt from The Dharma, by Kalu Rinpoche, from a chapter on The Four Dharmas of Gampopa. ] "The second aspect of transformation [of confusion into wisdom] concerns our speech. Mere words, which have no ultimate reality, can determine our happiness and suffering. In the Vajrayana context, we recite and meditate on mantra, which is enlightened sound, the speech of the [Bhodisattva of Compassion], the union of Sound and Emptiness. At first, the Union of Sound and Emptiness is simply an intellectual concept of what our meditation should be. One of the disciples was very diligent, though his realization was perhaps not so profound. When the two disciples went to their lama to indicate they had finished the practice, he said, 'Oh, you've both done excellently. The Powers of the Six Syllables "Behold! H.H. top of page

DAILY INSPIRATION on Spiritual Growth The Doctrine is Compassion -- The Dalai Lama We can reject everything else: religion, ideology, all received wisdom. But we cannot escape the necessity of love and compassion.... This, then, is my true religion, my simple faith. ~ Tenzin Gyatso, the 14th Dalai Lama ~ (Remembering the people of Tibet and the victims of Tiananmen Square on the opening of the Beijing Olympics ) (left button to play, right button to save)

10 Notable Numbers Our World Numbers effect most aspects of our lives daily. This is a list of 10 notable numbers. This is the temperature (in centigrade) known as absolute zero (0 Kelvin) which describes a theoretical system that neither emits nor absorbs energy. It is the point at which particles have a minimum energy, determined by quantum mechanical effects, which is called the zero-point energy. If you don’t know what this one means, the number does not apply to you. This number is unique in temperature readings; it is unique because -40 is the only point at which the fahrenheit and centigrade scales meet. -40F is the same as -40C. This is the largest number representable with standard Roman numeral notation. 666 is most famous as the number of the beast in the biblical book of the Apocalypse. Before the terrorist attacks on the US, this number was also attached to a type of porsche and a trojan asteroid that orbits the sun. 4. 3. e 2. Pi or ? This is the Golden Ratio. Technorati Tags: math, numbers

pudgalavada The Pudgalavāda was a group of five of the Early Schools of Buddhism. The name arises from their adherents’ distinctive doctrine (vāda) concerning the self or person (pudgala). The doctrine holds that the person, in a certain sense, is real. To other Buddhists, their view seemed to contradict a fundamental tenet of Buddhism, the doctrine of non-self. However, the Pudgalavādins were convinced that they had had preserved the true interpretation of the Buddha’s teaching. Although now all but forgotten, the Pudgalavāda was one of the dominant traditions of Buddhism in India during the time that Buddhism survived there. It seems, then, that they thought of some aspect or dimension of the self as transcending the aggregates and may have identified that aspect with Nirvana, which like most early Buddhists they regarded as an eternal reality. Table of Contents 1. 2. But this interpretation of the Buddha’s teaching also involves certain difficulties. 3. 4.

Digital Prayer Wheels Technical Details Download Mantra For the download, we've changed the file extension from ".wav" to".exe" so that your browser will let you download it. When you store it on your hard drive, you should change the file extension back to ".wav," i.e., Rename "om-mani-padme-hung.exe" to "om-mani-padme-hung.wav." (If your computer cannot play windows .wav files, you'll have to convert the file in order to actually hear it.) How to Add the Javascript Mani Scroll to a Web Page You can get the program by clicking on "Source" or "Document Source" on the "View" menu of your Web browser. More Animated GIF Images This is the first Mani wheel we found that could be displayed on a Web page. The top and bottom borders of this image look a little better against black or dark background. This image really requires a dark background in order to look right. Full-Screen Mani Wheel for DOS or Windows Machines Download and Setup Instructions Got it! Manib.exe is the program file. Method 1. top of page

:zenhabits Badass of the Week: Aki Ra Aki Ra "I poke my stick in the ground till I find a mine.Then I dig around it, to make sure that it is not booby-trapped.Then, I unscrew the detonator. And the mine is safe." Aki Ra is a Cambodian guy who goes out into the jungle and disarms landmines with a pocketknife and a really sharp stick. While I feel relatively confident that I can probably just post that sentence by itself along with a picture of this crazy bastard unscrewing a densely-packed bomb of unexploded TNT with his bare hands and a seemingly-endless supply of raw bravery, over the years you guys have come to expect a minimum word count out of me on these sorts of articles, so perhaps a little further explanation is going to be required. Back in the dark days of the 1970s, when the hypnotic horrors of disco music held much of the world in its terrible, unbreakable death-grip, the Southeast Asian nation of Cambodia was taken over by a group of soulless assburgers known as the Khmer Rouge. Further Reading: Wikipedia Main

negativity Here is an excerpt from a chapter entitled "Working with Negativity" found in the book "Myth of Freedom" by Chogyam Trungpa Rinpoche : "We all experience negativity--the basic aggression of wanting things to be different than they are. We cling, we defend, we attack, and thoughout there is a sense of one's own wretchedness, and so we blame the world for our pain. This is negativity. We experience it as terribly unpleasant, foul smelling, something we want to get rid of. But if we look into it more deeply, it has a very juicy smell and is very alive. Negativity breeds tension, friction, gossip, discontentment, but it is also very accurate, deliberate and profound. . . . . . ~ The Myth of Freedom and the Way of Meditation by Chögyam Trungpa Rinpoche ~ Other Chögyam Trungpa Rinpoche's Works (with Amazon Book Reviews) ~End of post~