The Art of Living: Vipassana Meditation 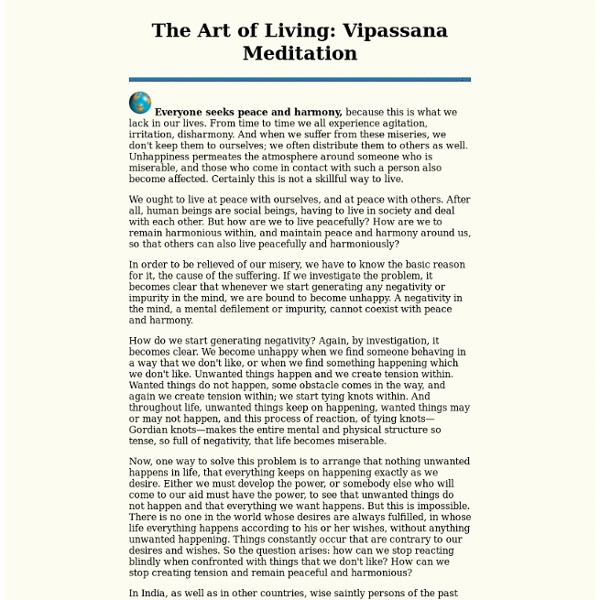 The following text is based upon a talk given by Mr. S.N. Goenka in Berne, Switzerland. Everyone seeks peace and harmony, because this is what we lack in our lives. From time to time we all experience agitation, irritation, dishar­mony. And when we suffer from these miseries, we don't keep them to ourselves; we often distribute them to others as well. We ought to live at peace with ourselves, and at peace with others. In order to be relieved of our misery, we have to know the basic reason for it, the cause of the suffering. How do we start generating negativity? Now, one way to solve this problem is to arrange that nothing unwanted happens in life, that everything keeps on happening exactly as we desire. This solution was helpful; it worked. Other explorers of inner truth went still further in their search and, by experiencing the reality of mind and matter within themselves, recognized that diverting the attention is only running away from the problem. Vipassana is such a remedy.

Japanese Zen Buddhist Philosophy 1. The Meaning of the Term Zen The designation of this school of the Buddha-Way as Zen, which means sitting meditation, is derived from a transliteration of the Chinese word Chán. Because the Chinese term is in turn a transliteration of the Sanskrit term dhyāna, however, Zen owes its historical origin to early Indian Buddhism, where a deepened state of meditation, called samādhi, was singled out as one of the three components of study a Buddhist was required to master, the other two being an observation of ethical precepts (sīla) and an embodiment of nondiscriminatory wisdom (prajñā). Meditation was picked as the name for this school because the historical Buddha achieved enlightenment (nirvāna) through the practice of meditation. In the context of Zen Buddhism, the perfection of nondiscriminatory wisdom (Jpn.: hannya haramitsu; Skrt.: prajñāpāramitā) designates practical, experiential knowledge.

The Tibetan Book of Living and Dying In his foreword to the book, the 14th Dalai Lama says: In this timely book, Sogyal Rinpoche focuses on how to understand the true meaning of life, how to accept death, and how to help the dying, and the dead...Death and dying provide a meeting point between the Tibetan Buddhist and modern scientific traditions. I believe both have a great deal to contribute to each other on the level of understanding and practical benefit. 10 Ways to Complain Less and Be Happier “Instead of complaining that the rose bush is full of thorns, be happy the thorn bush has roses.” ~Proverb We all complain. Even if you argue that you are the happiest person in the world, you still complain sometimes. Sometimes we complain without even realizing it, but rarely is it ever helpful.

How To Forgive, And Why You Should By Angela Haupt for U.S. News Health The deepest wounds feel like they'll last a lifetime: The absent mother who robbed you of the mother-daughter bond you craved and deserved. The eighth-grade bully who turned the classroom into a living nightmare. Qualia In philosophy, qualia (/ˈkwɑːliə/ or /ˈkweɪliə/; singular form: quale) are what some consider to be individual instances of subjective, conscious experience. The term "qualia" derives from the Latin neuter plural form (qualia) of the Latin adjective quālis (Latin pronunciation: [ˈkʷaːlɪs]) meaning "of what sort" or "of what kind"). Examples of qualia include the pain of a headache, the taste of wine, or the perceived redness of an evening sky. As qualitative characters of sensation, qualia stand in contrast to "propositional attitudes".[1]

The Dalai Lama - At Home in Exile by David Turnley - The Digital Journalist Dirck Halstead photographs and videos by Dirck Halstead Categories Photography 10 Things for Conscious People to Focus on in 2013 Dylan Charles, ContributorActivist Post The long anticipated and prophesied year, 2012, has come and gone; yet, the problems and challenges facing mankind and planet earth remain. Those who have put stock in the idea of conscious evolution are now faced with the burden of proof: is there any legitimacy to this idea of a ‘shift?’ Is Consciousness Universal? For every inside there is an outside, and for every outside there is an inside; though they are different, they go together. —Alan Watts, Man, Nature, and the Nature of Man, 1991 I grew up in a devout and practicing Roman Catholic family with Purzel, a fearless and high-energy dachshund. He, as with all the other, much larger dogs that subsequently accompanied me through life, showed plenty of affection, curiosity, playfulness, aggression, anger, shame and fear. Yet my church teaches that whereas animals, as God's creatures, ought to be treated well, they do not possess an immortal soul.

The Perfect Massage - Q by Equinox - StumbleUpon Learn to give a mind-blowing rubdown. (You can both thank us later). Thursday, September 8, 2011 Nothing says “I’m a keeper” like a well-executed massage. The problem? Magic Mushrooms Expand Your Mind And Amplify Your Brain’s Dreaming Areas. Here’s How Psychedelic drugs alter consciousness in a profound and novel way that increases the breadth and fluency of cognition. However, until recently, we were unable to offer an explanation for how the brain was altered to account for these effects. In a new study, published in Human Brain Mapping, we scanned the brains of volunteers who had been injected with psilocybin – the chemical found in magic mushrooms which gives a psychedelic experience – and a control group who hadn’t, and discovered two key things: that psilocybin increased the amplitude (or “volume”) of activity in regions of the brain that are reliably activated during dream sleep and form part of the brain’s ancient emotion system; and that psychedelics facilitate a state of “expanded” consciousness – meaning that the breath of associations made by the brain and the ease by which they are visited is enhanced under the drugs. Ego and emotion This finding of a similar pattern to dream activity is intriguing.

The Chakra System Home Table of Contents What is a Chakra?