Teaching English: séquence the best job in the world 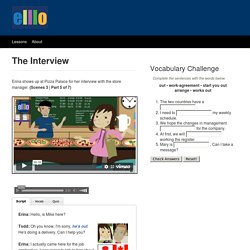 Todd: Oh you know, I'm sorry, he's out. He's doing a delivery. Can I help you? Erina: I actually came here for the job application. I was going to talk to him about the job Todd: Oh right, right. Erina: Yes, I am. Todd: Okay, yeah, Mike told me all about you. Erina: Yeah, I'm actually an exchange from Japan. Todd: Okay, so, with your visa, do you have a work-agreement? Erina: Yes I can. Todd: Okay. Erina: Okay. Todd: Would you be comfortable driving around Vancouver? Erina: Yeah, I would actually love to, because I would... Todd: Well, since you're new to Vancouver maybe we should start you out just making pizzas at first?

Erina: Yeah. Todd: Do you have any cooking experience? Erina: Yes, I love cooking. Todd: Okay. Erina: Yup/Yeah. Todd: Well it's pretty basic what you have to do. Erina: Oh that sounds pretty easy. Todd: Okay, well, tell me about your schedule. Erina: I can work on Tuesday and Thursday, and the weekends. Erina: I can work 5 hours, 6 hours a day. Elllo Mixer #08 Dream Job. Redo it It sucks, redo it! 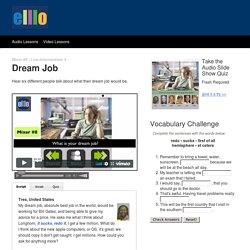 To 'redo' something is to do it over again from the beginning. If you are trying to learn a musical song, you may have done this many times, if you make a mistake, you start from the beginning and if you start from the beginning you are redoing it. I have to redo my whole project because my cat destroyed it. The actors had to redo the scene many times to get it right. suck It sucks 'Suck' is a slang term to mean something is very bad or or poor quality. I suck at tennis. My movies sucks. First of all My job would involve, first of all, a very high salary.

First of all, means that you are about to say a list of things, but the first thing is the most important. First of all, I would like to say thank you to everyone for coming tonight. First of all, it is not polite to speak to me like that. Ben, France (111184) BBC interview :What did Ben Southall do next? In 2009 Ben Southall landed "the best job in the world" as caretaker of an Australian tropical island. 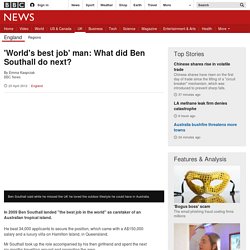 He beat 34,000 applicants to secure the position, which came with a A$150,000 salary and a luxury villa on Hamilton Island, in Queensland. Mr Southall took up the role accompanied by his then girlfriend and spent the next six months travelling around and promoting the area. Nearly three years later what is he up to now? When the charity fund-raiser, from Petersfield, in Hampshire, headed out to the Whitsunday Islands he was already a seasoned traveller who had completed solo expeditions around Africa. 'Desert island' Mr Southall flew to Australia to take up an unusual job sampling the tourism attractions dotted around the Great Barrier Reef. Part of his role involved updating a blog with photos, videos and diary entries documenting his experiences to help promote the area as a tourist destination worldwide. But the job itself was not what he first imagined it would be. Brit Ben Southall : the winner announcement. Ben Southall: advertising the job.