Consumerism Facts, information, pictures. The Origins of Consumerism: How Did We Get Here? BLACK FRIDAY CHAOS 2015 - Impulse Consumerism Gone Mad. Sheeple Out In Force. Consumer Society: All Grown Up. What are the advantages and disadvantages of consumerism? - Quora. 2 Sequence – I Shop Therefore I AM. - A la Une : Buy Nothing Day, Consumerism and advertising. "Buy Nothing Day", aussi nommé "no buy day", no shop day" et "no shopping day", se tient chaque année depuis 1993 le jour suivant Thanksgiving aux USA et au Canada. 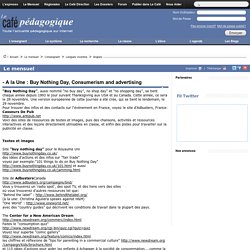 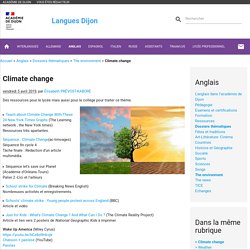 Community Supported Agriculture. Thinking about signing up for a CSA but want to learn more about the idea before you commit? 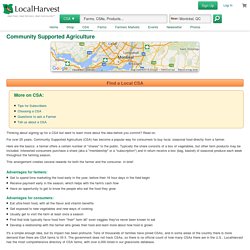 Read on. For over 25 years, Community Supported Agriculture (CSA) has become a popular way for consumers to buy local, seasonal food directly from a farmer. Here are the basics: a farmer offers a certain number of "shares" to the public. Typically the share consists of a box of vegetables, but other farm products may be included. McDonald’s Goes Vegetarian in India. While McDonald’s may be known for its Big Mac containing two “all-beef patties” in its nearly 33,000 worldwide restaurants, a pair of forthcoming restaurants near religious centers in India will go completely meatless — the first all-vegetarian restaurants in the chain’s 57-year history. 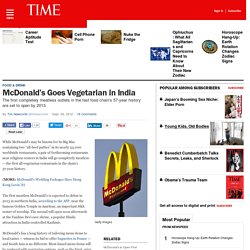 (MORE: McDonald’s Wedding Packages Have Hong Kong Lovin’ It) The first meatless McDonald’s is expected to debut in 2013 in northern India, according to the AFP, near the famous Golden Temple in Amritsar, an important Sikh center of worship. Globalization - National Geographic Society. Globalization is the connection of different parts of the world. 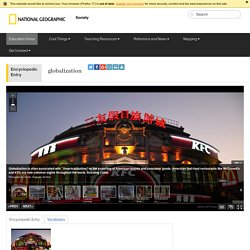 Globalization results in the expansion of international cultural, economic, and political activities. As people, ideas, knowledge, and goods move more easily around the globe, the experiences of people around the world become more similar. Globalization in History Globalization has a long history. Ancient Greek culture, for instance, spread across much of southwestern Asia, northern Africa, and southern Europe. Food: Recipe Ideas, Cooking Shows and Iconic Chefs. The Lexicon of Sustainability: Episodes List. 10 Steps to Becoming a Locavore . NOW.

Week of 11.2.07 By Jennifer Maiser Jennifer Maiser is the editor of the Eat Local Challenge website, which is a place for authors nationwide to share their experiences with finding locally grown and locally produced food. 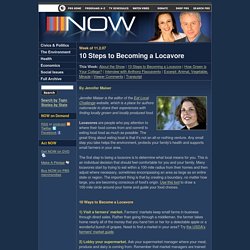 Locavores are people who pay attention to where their food comes from and commit to eating local food as much as possible. The great thing about eating local is that it's not an all-or-nothing venture. Any small step you take helps the environment, protects your family's health and supports small farmers in your area. Global warming, sustainable development and and biodiversity. Top 10 Reasons to Support Organic in the 21st Century. Source: Alan Greene, MD (Organic Trade Association), Bob Scowcroft (Organic Farming Research Foundation), Sylvia Tawse (Fresh Ideas Group) 1. 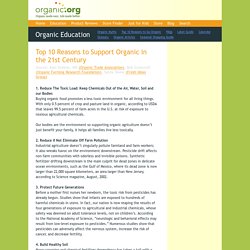 Reduce The Toxic Load: Keep Chemicals Out of the Air, Water, Soil and our Bodies Buying organic food promotes a less toxic environment for all living things. With only 0.5 percent of crop and pasture land in organic, according to USDA that leaves 99.5 percent of farm acres in the U.S. at risk of exposure to noxious agricultural chemicals. Organic farming. What is organic farming? 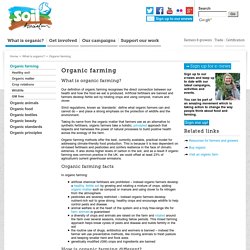 Our definition of organic farming recognises the direct connection between our health and how the food we eat is produced. Artificial fertilisers are banned and farmers develop fertile soil by rotating crops and using compost, manure and clover. Strict regulations, known as ‘standards’, define what organic farmers can and cannot do – and place a strong emphasis on the protection of wildlife and the environment. Taking its name from the organic matter that farmers use as an alternative to synthetic fertilisers, organic farmers take a holistic, principled approach that respects and harnesses the power of natural processes to build positive health across the ecology of the farm. Organic farming methods offer the best, currently available, practical model for addressing climate-friendly food production. Organic farming facts In organic farming:

What are locovores? ­Wo­uld you give up your morning coffee or even treats like chocolate if doing so helped the environment and the local economy? 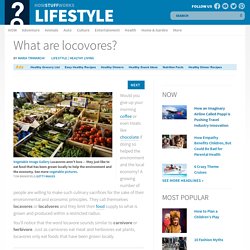 A growing number of people are willing to make such culinary sacrifices for the sake of their environmental and economic principles. They call themselves locavores or localvores and they limit their food supply to what is grown and produced within a restricted radius.­ You'll notice that the word locavore sounds similar to carnivore or herbivore.