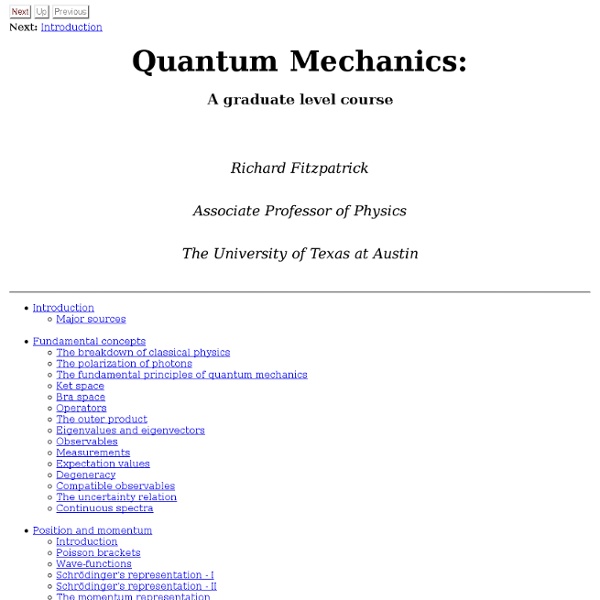 Artists, Physicists, Mathematicians and Philosophers Contemplate Infinity As I stepped into the Infinity Environment on Wednesday morning (Feb. 1), I heard faint gasps from those around me. With apprehension, we entered a stark white, brilliantly lit room with no edges. The curved walls and angled lighting minimized shadows, giving the illusion that we were staring into a continuum. With no visual reference points anywhere in the room, my eyes flickered about, desperate for something to focus on; it was impossible to tell how far space extended, if at all. In seeming infinite, space ceased to exist beyond my eyelashes and nose. "There is no other time in your life when you will look out and see nothing at all," one young woman, an art student, whispered.

Einstein for Everyone Einstein for Everyone Nullarbor Press 2007revisions 2008, 2010, 2011, 2012, 2013 Copyright 2007, 2008, 2010, 2011, 2012, 2013 John D. Norton Published by Nullarbor Press, 500 Fifth Avenue, Pittsburgh, Pennsylvania 15260 with offices in Liberty Ave., Pittsburgh, Pennsylvania, 15222 All Rights Reserved John D. The Elegant Universe: Pt 1 The Elegant Universe: Part 3 PBS Airdate: November 4, 2003 NARRATOR: Now, on NOVA, take a thrill ride into a world stranger than science fiction, where you play the game by breaking some rules, where a new view of the universe pushes you beyond the limits of your wildest imagination. How Quantum Suicide Works" ­­A man sits down before a gun, which is pointed at his head. This is no ordinary gun; i­t's rigged to a machine that measures the spin of a quantum particle. Each time the trigger is pulled, the spin of the quantum particle -- or quark -- is measured. Depending on the measurement, the gun will either fire, or it won't. If the quantum particle is measured as spinning in a clockwise motion, the gun will fire.

A Bite of Buddhism The four sublime mental states are qualities of mind that we cultivate in order to alleviate the suffering we experience in everyday life and to feel more connected to others—and the worries and fears we all share. In the language of the Buddha (Pali), they are called the brahma viharas , which means "the dwelling place of awakened beings." The good news for us unawakened beings is that it's easy to begin cultivating the brahma viharas . Indeed, they are an integral part of other religious, spiritual, and humanistic traditions. Researchers now able to stop, restart light By William J. Cromie Gazette Staff "Two years ago we slowed it down to 38 miles an hour; now we've been able to park it then bring it back up to full speed."

Teleportation Teleportation is the name given by science fiction writers to the feat of making an object or person disintegrate in one place while a perfect replica appears somewhere else. How this is accomplished is usually not explained in detail, but the general idea seems to be that the original object is scanned in such a way as to extract all the information from it, then this information is transmitted to the receiving location and used to construct the replica, not necessarily from the actual material of the original, but perhaps from atoms of the same kinds, arranged in exactly the same pattern as the original. A teleportation machine would be like a fax machine, except that it would work on 3-dimensional objects as well as documents, it would produce an exact copy rather than an approximate facsimile, and it would destroy the original in the process of scanning it. In 1993 an international group of six scientists, including IBM Fellow Charles H.