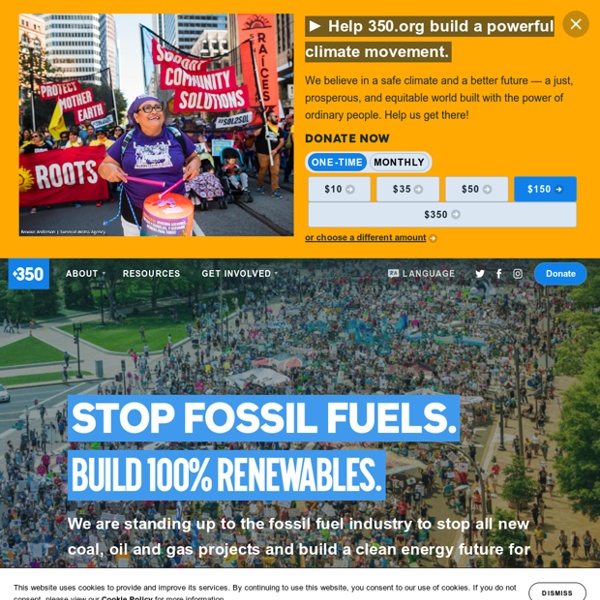 World Energy Report (Infographic) Clean Power Published on September 30th, 2011 | by Zachary Shahan "World Energy Report" (CLICK TO ENLARGE) OK, so this isn’t an official World Energy report just released by some international energy organization or research institute, but it is a fun infographic created by some friends of ours over at MyEnergy.com that helps to visualize and convey some key energy facts.

Stand in Solidarity - Stop the Tar Sands! English • Português • Español • Français • Deutsch **UPDATE: We joined forces with a powerful coalition of organizations, and unveiled our combined number of signatures (618,428!!) at the White House on September 3** Scientists Have Almost Completed the Resurrection of Extinct Aurochs and Plan to Reintroduce Them to the Wild A group of scientists is attempting to re-wild 1 million hectares (2.47 million acres) of European lands, and one of the keys in the circle of life will be reintroducing the fierce, huge, wild aurochs, an ancestor of modern cattle that went extinct centuries ago. How can they reintroduce an extinct animal?, you may ask. Scientists in the Netherlands, Belgium, Czech Republic, Romania and Croatia are back-breeding specimens of the animal from modern cattle that retain the most genes of the extinct beast. So far scientists in those countries have bred about 500 animals.

Products : Inspirational Quotes - Personal Development - Motivational Quotes & More - Jim Rohn International As the official site of renowned author and personal-development legend Jim Rohn, JimRohn.com offers hundreds of life-changing resources to increase your knowledge, self-confidence and attitude and give you a competitive advantage in business and in life! Find everything from popular inspirational CD and motivational DVD programs to best-selling business and personal development books and digital downloads. Discover new ways to improve your finances, develop better success habits, manage your time, set goals, stay motivated, inspire your colleagues, invigorate your health and vitality, balance work and family, cultivate leaders in your organization, improve your memory, find your passion, live the life of your dreams or make a difference in other people's lives. Popular products include books of success quotes, inspirational quotes and motivational quotes as well as the best personal development products from Jim Rohn and other top personal achievement experts, such as John C.

7 Environmental Problems That Are Worse Than We Thought With as much attention as the environment has been getting lately, you’d think that we’d be further along in our fight to preserve the world’s species, resources and the beautiful diversity of nature. Unfortunately, things aren’t nearly that rosy. In fact, many of the environmental problems that have received the most public attention are even worse than we thought – from destruction in the rain forest to melting glaciers in the Arctic.