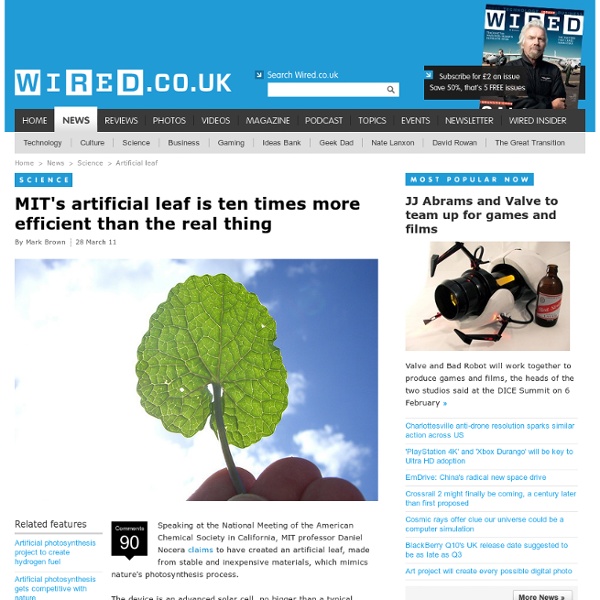 Speaking at the National Meeting of the American Chemical Society in California, MIT professor Daniel Nocera claims to have created an artificial leaf, made from stable and inexpensive materials, which mimics nature's photosynthesis process. The device is an advanced solar cell, no bigger than a typical playing card, which is left floating in a pool of water. Then, much like a natural leaf, it uses sunlight to split the water into its two core components, oxygen and hydrogen, which are stored in a fuel cell to be used when producing electricity. Nocera's leaf is stable -- operating continuously for at least 45 hours without a drop in activity in preliminary tests -- and made of widely available, inexpensive materials -- like silicon, electronics and chemical catalysts. It's also powerful, as much as ten times more efficient at carrying out photosynthesis than a natural leaf. Those are impressive claims, but they're also not just pie-in-the-sky, conceptual thoughts.

No joke: This is the biggest battery breakthrough ever A pioneer in battery research who already successfully launched a $350 million company to supply batteries to the likes of GE and Chrysler has done it again — only this time, "it" represents the complete reinvention of battery technology as we know it. This technology is in the research phase, but if it can be cost-effectively brought to market — and there's every reason to believe that it could be — it could revolutionize the way we store and transport energy, in the process fully replacing fossil fuels and especially oil. The key to this new technology is that the metals that would normally be solids in a conventional battery have been broken into nano-size particles that are suspended in a liquid. The batteries, known as "semi-solid flow cells," store their power in a black gunk that looks like motor oil, which has earned it the nickname "Cambridge Crude."

50 Life Secrets and Tips Memorize something everyday.Not only will this leave your brain sharp and your memory functioning, you will also have a huge library of quotes to bust out at any moment. Poetry, sayings and philosophies are your best options.Constantly try to reduce your attachment to possessions.Those who are heavy-set with material desires will have a lot of trouble when their things are taken away from them or lost. Possessions do end up owning you, not the other way around. Water-splitting catalyst (PhysOrg.com) -- Expanding on work published two years ago, MIT's Daniel Nocera and his associates have found yet another formulation, based on inexpensive and widely available materials, that can efficiently catalyze the splitting of water molecules using electricity. This could ultimately form the basis for new storage systems that would allow buildings to be completely independent and self-sustaining in terms of energy: The systems would use energy from intermittent sources like sunlight or wind to create hydrogen fuel, which could then be used in fuel cells or other devices to produce electricity or transportation fuels as needed. Nocera, the Henry Dreyfus Professor of Energy and Professor of Chemistry, says that solar energy is the only feasible long-term way of meeting the world’s ever-increasing needs for energy, and that storage technology will be the key enabling factor to make sunlight practical as a dominant source of energy. But the research is still in an early stage.

MIT researchers create super efficient 'origami' solar panels MIT researchers have created an origami-like solar structure that is much more efficient than current flat panels. The three-dimensional solar structure could, at least in principle, absorb a lot more light and generate more power than a flat panel containing the same area footprint. The hope is that all unused light which has been reflected off one panel would be captured by other panels. Panels of this type would be most ideal in circumstances with limited space.

lunis suppe Advertise here via BSA In this article, we’ll get rolling on developing plug-in free by creating bar graphs and similar graphics, using NASDAQ’s current web site as an example. But we won’t be creating merely a picture of a bar graph, but a real, interactive bar graph. Let’s take a look at an existing site that uses Flash, then build one using HTML5. If you have Flash installed, you’ll see a fancy line chart. 10 Inexpensive Activities and Games Money is tight anymore. Between a recession that we are all tired of hearing about, low amounts of jobs and high unemployment, we should all be saving our money. But we are going to be equally, if not more, bored when we are poor as we are when we have enough money to spare for luxuries and hobbies. You may not have enough money for the Nintendo Wii, you may be a few dollars short to go to the theatre and see a movie, maybe you are using most of your paycheck to fill up your car, so you can go to work, so you can get a paycheck that is just enough to fill up your car for the commute to work. So what is there to do that is fun, but very cheap? Well, at least ten things.

A new dimension for solar energy - MIT News Office Intensive research around the world has focused on improving the performance of solar photovoltaic cells and bringing down their cost. But very little attention has been paid to the best ways of arranging those cells, which are typically placed flat on a rooftop or other surface, or sometimes attached to motorized structures that keep the cells pointed toward the sun as it crosses the sky. Now, a team of MIT researchers has come up with a very different approach: building cubes or towers that extend the solar cells upward in three-dimensional configurations. Amazingly, the results from the structures they’ve tested show power output ranging from double to more than 20 times that of fixed flat panels with the same base area. The biggest boosts in power were seen in the situations where improvements are most needed: in locations far from the equator, in winter months and on cloudier days.

Renault Twizy Presented in its definitive form at the Paris Motor Show in 2010, Renault Twizy was designed from the outset as an ultramobile all-electric two-seater vehicle (TWIN and EASY). Renault Twizy will appeal to busy, car-owning city dwellers seeking a second vehicle, as well as to younger drivers looking for a safe way to start driving with a vehicle that does not require a licence. Although its compact dimensions are likely to prompt comparisons with the world of scooters, Renault Twizy possesses all the fundamentals of a car: a chassis with four wheels, a steering wheel, pedals, and an enveloping body for two occupants sitting in tandem, one behind the other. Renault Twizy is a car of character with a resolutely modern design; open bodywork with sweeping lines, original (optional) gull wing doors, a windscreen and roof forming a large glazed area, as well as lights creating an original lighting signature.

Ultracapacitors to Boost the Range of Electric Cars A startup called Nanotune says its ultracapacitor technology could make electric cars cheaper and extend their range. The company, based in Mountain View, California, has developed a way to make electrodes that results in ultracapacitors with five to seven times as much storage capacity as conventional ones. Conventional ultracapacitors, which have the advantage of delivering fast bursts of power and can be recharged hundreds of thousands of times without losing much capacity, are too expensive and store too little energy to replace batteries. Nanotune, however, which has raised $3 million from the venture capital firm Draper Fisher Jurvetson, says its ultracapacitors are close to competing with batteries in terms of energy storage, and could soon surpass them. Using a conventional electrolyte, the company has demonstrated energy storage of 20 watt-hours per kilogram, as opposed to roughly five watt-hours for a conventional ultracapacitor.

3D-printed clean fusion energy for the World Summary Updated on 29-11-2013 : The definitive legs of the stellarator have been designed, fabricated, assembled and validated. The central ring to accurately locate the 3D printed pieces has also been installed. Five new photos have been added to the Gallery !!. New Energy and Fuel May The Berkley Lab at the University of California Berkley has come up with a new catalyst for splitting water. In fairness to readers, there have been other claims from out there that didn’t seem, well, practical. So they’ve been overlooked. But this time the sense of the work seems to make some sense. The oxygen gas it seems, isn’t fully coming off with the hydrogen, this is new.

Natural photosynthesis is so ancient that it cannot distinguish between carbon dioxide and oxygen - hence the low efficiency. by pauljacobson May 12

The end of the Age of Burning? It is coming! Of course, Nocera's work is focussed on a hydrogen & oxygen economy - different in quality from the water-based economy of electricity and oxygen that will be the ultimate solution. Check it out in my New Energy Pearltree. by pauljacobson Apr 1