Photo by Callum Shaw on Unsplash 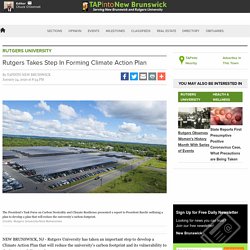 “Rutgers has been taking steps to reduce our carbon emissions for several years. Now we’re moving forward to create an integrated strategy for advancing climate action at Rutgers that will also support climate-positive economic development across New Jersey,” said Robert Kopp, task force co-chair and professor in the Department of Earth and Planetary Science at the School of Arts and Sciences and director of the Rutgers Institute of Earth, Ocean and Atmospheric Sciences.

Sign Up for New Brunswick Newsletter Our newsletter delivers the local news that you can trust. You have successfully signed up for the TAPinto New Brunswick Newsletter. Middle schoolers may be the secret weapon in fight against climate change. It's at this developmental age that students can master complex concepts like climate change and remain open to new ideas, the researchers say. 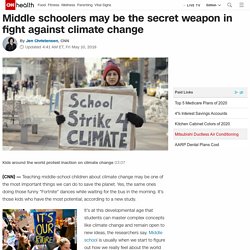 Middle school is usually when we start to figure out how we really feel about the world and to form our own opinions.

Eating a Plant Based Diet 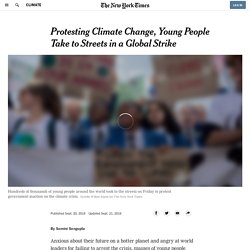 More than 100,000 protested in Melbourne, in what organizers said was the largest climate action in Australia’s history. The rally shut down key public transport corridors for hours. In Sydney, thousands gathered in the Domain, a public park east of the Central Business District — grandparents escorting their children holding homemade signs, groups of teenagers in school uniforms, parents handing out boxed raisins to their young children. “Adults are, like, ‘Respect your elders.’ And we’re, like, ‘Respect our futures,’” said Jemima Grimmer, 13, in Sydney.

In Quezon City, in the Philippines, protesters, including one dressed as Pikachu, the Pokémon character, held a sign that read: “Dead Planet Soon. Thousands turned out in Warsaw, the capital of coal-reliant Poland. Across Britain, there were protests from Brighton to Edinburgh. 350.org. Climate change activism. Evidence.

› en español Earth's climate has changed throughout history. Just in the last 650,000 years there have been seven cycles of glacial advance and retreat, with the abrupt end of the last ice age about 11,700 years ago marking the beginning of the modern climate era — and of human civilization. Most of these climate changes are attributed to very small variations in Earth’s orbit that change the amount of solar energy our planet receives.

Scientific evidence for warming of the climate system is unequivocal. The current warming trend is of particular significance because most of it is extremely likely (greater than 95% probability) to be the result of human activity since the mid-20th century and proceeding at a rate that is unprecedented over decades to millennia.1 Earth-orbiting satellites and other technological advances have enabled scientists to see the big picture, collecting many different types of information about our planet and its climate on a global scale. Global Temperature Rise. Map - FridaysForFuture. Global climate strike: how you can get involved. The global climate strike kicks off on Friday and will ripple across the world in more than 4,000 locations, the start of a weeklong movement to train international attention on the climate emergency. 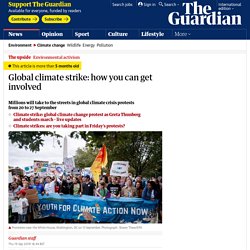 It’s the latest of a succession of strikes on Fridays led by schoolchildren – but this time adults are invited to join in. What will happen? Millions are expected to take to the streets in more than 130 countries, with support on this occasion from unions, churches, and local community groups. Some are calling it the biggest mass protest in the history of the climate crisis. How can you get involved? Possibly the best place to start is by consulting the Fridays for Future map, which details what is going on and where in more than 130 countries – and thousands of locations – worldwide. It’s worth noting that timings will vary from city to city and that some countries (notably New Zealand and Italy) have put back their protests until Friday 27th.

The drive to a conclusion. No Climate Conference in the last decade has finished on time, and the Conference here in Madrid is showing no signs of nearing completion tonight. 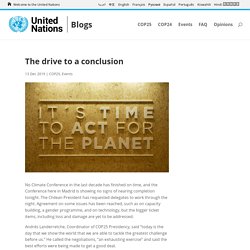 The Chilean President has requested delegates to work through the night. Agreement on some issues has been reached, such as on capacity building, a gender programme, and on technology, but the bigger ticket items, including loss and damage are yet to be addressed. Andrés Landerretche, Coordinator of COP25 Presidency, said “today is the day that we show the world that we are able to tackle the greatest challenge before us.” He called the negotiations, “an exhausting exercise” and said the best efforts were being made to get a good deal.

Winding down — Many of the COP participants have started to leave. Cutting emissions from a well-being perspective — Very often, the urgency for acting on climate is framed in an existential manner. NATIONS UN Climate Change Summit 2019.