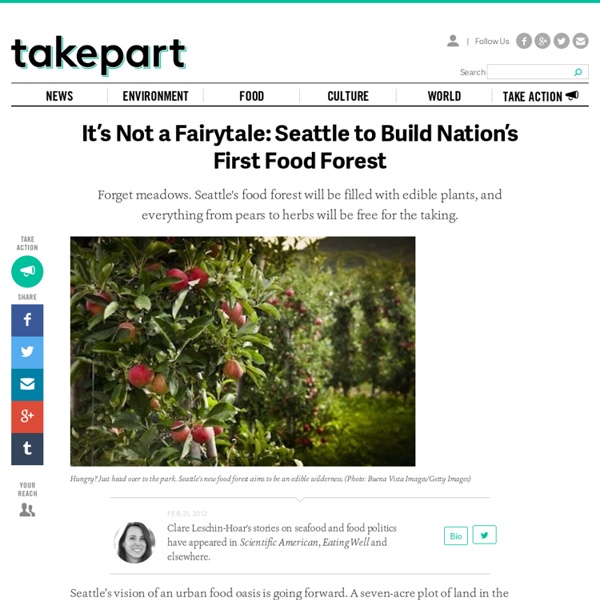 Seattle’s vision of an urban food oasis is going forward. A seven-acre plot of land in the city’s Beacon Hill neighborhood will be planted with hundreds of different kinds of edibles: walnut and chestnut trees; blueberry and raspberry bushes; fruit trees, including apples and pears; exotics like pineapple, yuzu citrus, guava, persimmons, honeyberries, and lingonberries; herbs; and more. All will be available for public plucking to anyone who wanders into the city’s first food forest. “This is totally innovative, and has never been done before in a public park,” Margarett Harrison, lead landscape architect for the Beacon Food Forest project, tells TakePart. The concept of a food forest certainly pushes the envelope on urban agriculture and is grounded in the concept of permaculture, which means it will be perennial and self-sustaining, like a forest is in the wild. That the plan came together at all is remarkable on its own. MORE: Amazing Apple Powered Lamp Related:  Food Issues

Interview with Kultivator, an experimental cooperation of organic farming and visual art practice Images Kultivator from the series Wedding between art and agriculture I discovered KULTIVATOR a couple of years ago at Pixelache in Helsinki. The collective was founded in 2005 by 3 artists and 2 organic farmers in the village Dyestad, on the Swedish island of Öland. This cooperation of farming and visual art practice involves an organic farm with where pigs are raised, cows are milked, potatoes are harvested and linseed oil is pressed. But KULTIVATOR is also a space for artist residencies, exhibitions, performances, installations and screenings. And in between are activities that draw in both the artist and the farming community. Malin Vrijman, one of the founding members of Kultivator, was kind enough to answer my many questions: Wedding masquerade Dyestad farm pig In an interview for publik.dk, you said that there are many similarities between the way you live and work as artists and how an organic farmer live and work. But even more interestingly, what did you bring to each other?

Garden of Eatin' :: How to Avoid GMO/Monsanto Learn why Monsanto and GMO must be avoided. See what companies have questionable seed-buy practices, and who sells safe seed. What is GMO, and who is Monsanto? A genetically modified organism (GMO) or genetically engineered organism (GEO) is an organism whose genetic material has been altered using genetic engineering techniques. The Monsanto Company is a U.S. Why does it matter if seed has been genetically modified? These books have excellent reviews at Amazon and go very in depth into the issues with Monsanto. >> The Council for Responsible Genetics has an excellent FAQ page that will answer this pressing question. Other links to read: Vanity Fair article Center for Food Safety: Monsanto vs US Farmers Report Mcspotlight article Government slashes pesticide reporting laws Organic Consumers For more information, just Google Monsanto. Now, who to avoid? 1.

Bottle Drip Irrigation | I prefer to have the bottle standing right-way-up as I think it looks nicer and it keeps debris out of the bottle thus keeping the holes from blocking. The materials: * 2 litre plastic soft-drink bottle or water bottle * Sharp small screwdriver, pointed hole-maker or drill This can be used in container gardening, raised bed gardens and open vegetable gardens. Using your pocket knife, make 2 small slits in the bottom of your bottle. Dig a hole next to your tomato plant. This will slowly deep-water your tomato plants and most other vegetable plants. You can learn more about this on another website. Only two very small holes are needed at the lowest place on the bottle. I prefer to leave the lids off. Place bamboo stakes next to each bottle. Here I am making another hole slightly higher up the bottle. However, if I remove the lid, water will come out this hole as well as the holes in the base. You can make larger holes, and partly fill the bottle with coarse-sand or soil to slow the flow.

Vandana Shiva: Teachers for a Living World by Madhu Suri Prakash While Ivy League schools marvel at India’s economic growth, Vandana Shiva’s University of the Seed looks to the earth—and Gandhi—for guidance. posted Jan 27, 2012 Gandhi once burned British cloth imported from the mills of Manchester to reveal the power of the indigenous spinning wheel; and led the famous Salt March to underscore the capacities of all Indians (in fact, all human beings) to live autonomously, depending on the support of themselves and each other while throwing off the shackles of global empire. Renowned food and anti-globalization activist Vandana Shiva’s Bija Vidyapeeth (University of the Seed), co-founded with Satish Kumar in 2001, is grounded on the four Gandhian principles of non-violence: swaraj (self-rule), swadeshi (home-spun), satyagraha (truth force), and savodaya (the uplifting of all). “Gandhi and Globalization” is a course co-taught annually at Bija Vidyapeeth for ten short, intense days in November and December. Interested?

Farmers Go Wild by Abby Quillen Going beyond organic, a new generation of farmers is nurturing nature as well as crops. posted Feb 06, 2012 Jack Gray of Winter Green Farm outside of Eugene, Ore., is committed to farming without harming surrounding wildlife and natural ecosystems. “Frogs are an indicator species,” Jack Gray explains, leaning over a small, muddy pond to look for tadpoles. Here on the 170-acre Winter Green Farm, 20 miles west of Eugene, Ore., Gray has raised cattle and grown vegetables and berries for 30 years. It’s a sunny April day, but water pools in the pastures, evidence of the rains this part of Oregon is known for. Gray is in his mid-50s and agile from decades of working outside. They envision a landscape where farms meld into the environment and mimic the natural processes that surround them. Cows graze in a field behind him; wind whispers through a stand of cattails, and two mallards lift off. Gray, his wife, Mary Jo, and two other families co-own Winter Green Farm. The Mountain Lion and the Lamb

Urban hunter-gatherers unable to resist the lure of forbidden fruit Juliette Anich picks apples in Brunswick. Photo: Rodger Cummins PICKED from the branch, fresh fruit always tastes better. But it's all the sweeter when plucked for free from a neighbourhood tree. At least that's the ideology behind the city's growing legion of self-described ''urban foragers'' and ''urban hunter-gatherers'', who say it's smarter, greener and cheaper than buying supermarket fruit that's well-travelled and aged in cold storage. These groups are using the internet to circulate maps showing where free fruit is ripe for the plucking, prompting concerns from some lawyers and councils, which say that the practice is illegal, even if fruit hangs over public land. Curiosity first drove Juliette Anich to map ''feral fruit'' in Brunswick streets, then came frustration at the abundance of figs, pears, mandarins and apples left to ripen and rot. Advertisement ''We let fruit go to waste in our backyards but hop in the car to drive down to a supermarket to buy an apple,'' she said.

The transformative power of Permablitz At the Permaculture Design Course we just finished in Sydney, Adam Grubb got everyone truly inspired about the power of Permablitz. A good permablitz is an valuable opportunity to participate in design, community, digging, growing and learning, all in one day. Following on from Adam’s excellent ‘How to run a Permablitz really well’ talk that he gave during his visit (video of the talk is below), there’s been a few videos come to light that really help understand just why a permablitz is so darn cool. So I thought I’d share them with you… A great timelapse from a November 2011 permablitz in Brunswick, Melbourne: The ‘How to run a Permablitz’ Talk that Adam Grubb gave in Sydney recently: And a great Permablitz at Angel Street Community Garden, Newtown, Sydney, in 2008: A lovely slideshow of a blitz in a small backyard at Reservoir, Melbourne, in 2009 For more info on how and why to run a permablitz, start at

James Lovelock Quote Posted on | February 23, 2012 | 1 Comment “There have been seven disasters since humans came on the earth, very similar to the one that’s just about to happen. I think these events keep separating the wheat from the chaff. And eventually we’ll have a human on the planet that really does understand it and can live with it properly. That’s the source of my optimism.” May we become those humans that do understand it and live with it properly… Comments The Best Way to Ripen Peaches A Ripe Peach Is Worth the Wait I love peaches too much to eat them as the rock hard flavorless orbs we’ve come to expect from the local grocer. It’s worth every penny to buy from local growers or grow peaches yourself as it seems impossible to ship perfectly ripe peaches. Heck, I can’t take a bag full of my peaches to a neighbor across the street without having jam upon arrival. After years of trying many techniques, I believe I’ve found the best way to ripen a peach if picked too early or trucked in from another local and picked firm. It’s simple and it works. How to Ripen a Peach to Juicy Perfection Step 1: Selection Please, never squeeze a peach as you basically ruin it. Step 2: Nap Time for Your Peaches Place the peach or nectarine stem side down on a linen napkin, pillowcase, or cotton woven towel, as these fabrics breathe. Step 3: No Direct Sunlight Make sure the fruit doesn’t touch and is kept in a cool place out of the sun. Step 4. Step 5: Gauging Ripeness

FRESH (english) | jordforbindelse World’s wildest supermarket A holistic and most outrageous concept From: Sepp Holzers Permakultur, Leopold Stocker Verlag, 2008 Fresh is the concept for an organic, living supermarket in cities and villages, were instead of taking the items off the shelf, the customer harvests the produce directly from raised beds. A system that works along with nature rather than against it. By harvesting, the customer contributes to the work of producing to such a large extend that the produce can be offered at a never before seen quality and low charge. Man is the only creature that has to pay for living on planet earth. The system is designed out of economic interest and thus fails to address the fundamental values of food. All processing of food diminishes its quality, whether it is the tilling of the soil or the processing of the actual crop. A highly productive place offering the most fresh and healthy produce at low and sustainable cost. To be established A place to experience and teach ecology.

P E R M A V A T I O N S Introduction to Permaculture - 40 hours of Free video lectures Permaculture means 'permanent culture,' (or 'permanent agriculture') and ...'is the conscious design and maintenance of cultivated ecosystems that have the diversity, stability, and resilience of a natural ecosystem.' (Bill Mollison) This course will explore, through lectures, discussions, field trips, and required projects, a design/thinking methodology that seeks to profide for our physical needs, food, water, shelter, energy, etc., while doing so in an environmentally friendly, sustainable manner. Download all lectures for Free here: Watch online all lectures for Free here: See also: Introduction to Permaculture - 18 part webinar with Bill Wilson of Midwest Permaculture - This is an 18 part 90 minute intro to permaculture webinar with Bill Wilson of Midwest Permaculture in Illinois. Documentary Films - Permaculture / Organic FarmingEbooks - Permaculture & Forest Gardening Free Documentary Films ArchiveFree Full Ebooks Archive