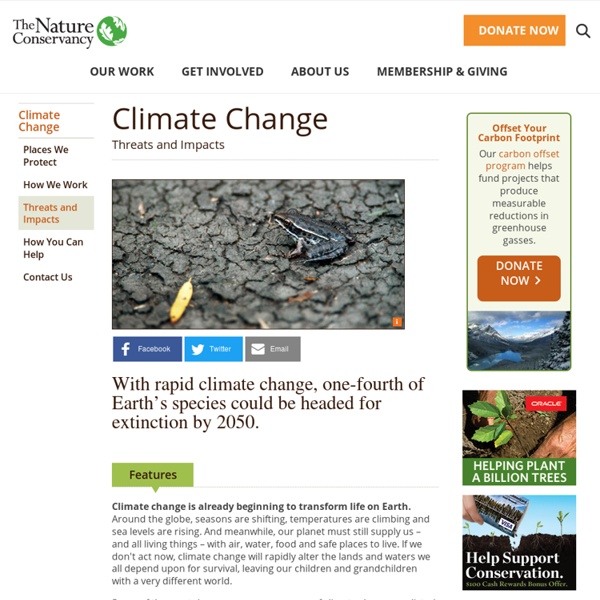 Effects Global climate change has already had observable effects on the environment. Glaciers have shrunk, ice on rivers and lakes is breaking up earlier, plant and animal ranges have shifted and trees are flowering sooner. Effects that scientists had predicted in the past would result from global climate change are now occurring: loss of sea ice, accelerated sea level rise and longer, more intense heat waves. Taken as a whole, the range of published evidence indicates that the net damage costs of climate change are likely to be significant and to increase over time. Scientists have high confidence that global temperatures will continue to rise for decades to come, largely due to greenhouse gases produced by human activities. According to the IPCC, the extent of climate change effects on individual regions will vary over time and with the ability of different societal and environmental systems to mitigate or adapt to change. Future effects Change will continue through this century and beyond

Higher Temperatures Heat-trapping gases emitted by power plants, automobiles, deforestation and other sources are warming up the planet. In fact, the five hottest years on record have all occurred since 1997 and the 10 hottest since 1990, including the warmest years on record – 2005 and 2010. High temperatures are to blame for an increase in heat-related deaths and illness, rising seas, increased storm intensity, and many of the other dangerous consequences of climate change. During the 20th century, the Earth’s average temperature rose one degree Fahrenheit to its highest level in the past four centuries – believed to be the fastest rise in a thousand years. Scientists project that if emissions of heat-trapping carbon emissions aren’t reduced, average surface temperatures could increase by 3 to 10 degrees Fahrenheit by the end of the century. The planet’s oceans are also warming, which is causing dangerous consequences such as stronger storms, coral bleaching and rising seas.

3,200 Year Old Tree Never Been Captured In A Single Image... (Distractify) Cloaked in the snows of California’s Sierra Nevada, the 3,200-year-old giant sequoia called the President rises 247 feet. Two other sequoias have wider trunks, but none has a larger crown, say the scientists who climbed it. The figure at top seems taller than the other climbers because he’s standing forward on one of the great limbs. The trunk is 27 feet wide and the his mighty branches hold 2 billion needles, the most of any tree on the planet. Giant sequoias exist in only one place, where The President and smaller trees that make up his “House” and “Senate”, reside. The team painstakingly put together a set of pulleys and levers to climb the tree. Awesome stuff. Chael Nichols, Ngm staff. Order Large Format Prints at: NationalGeographicCart.com

changing landscapes Rising temperatures and changing patterns of rain and snow are forcing trees and plants around the world to move toward polar regions and up mountain slopes. These vegetation shifts will undermine much of the work the conservation community has accomplished to date, with the potential to permanently change the face of Conservancy preserves, local land trusts, and even our national parks. In the tundra, thawing permafrost will allow shrubs and trees to take root. In the Great Plains of the United States, grasslands will likely become forests. And New England’s fiery fall foliage will eventually fade as maple and beech forests shift north toward cooler temperatures. As plant communities try to adjust to the changing climate by moving toward cooler areas, the animals that depend on them will be forced to move. Some species and communities such as polar bears and alpine meadows may be left without any remaining viable habitat, putting much of our treasured wildlife at risk.

The Fairy Tale Forest By Ildiko Neer | Travel Klix Hungarian photographer Ildiko Neer began operations in 2009. He draws his inspiration from nature, but a special thrill is wood – the sun makes its way through the trees, the sound of leaves and stunning colors of autumn. All this was reflected in the works of photographer. This amazing photographer really have the eye for a good nature photo. Landscapes, landscapes news, landscapes photos, nature, nature landscapes, nature news, Nature Photos, Photos, travel landscapes, travel nature, Travel News, Travel Photos, Travel Tips About the Impacts of Climate Change As the Earth heats up, sea levels rise because warmer water takes up more room than colder water, a process known as thermal expansion. Melting glaciers compound the problem by dumping even more fresh water into the oceans. Rising seas threaten to inundate low-lying areas and islands, threaten dense coastal populations, erode shorelines, damage property and destroy ecosystems such as mangroves and wetlands that protect coasts against storms. Sea levels have risen between four and eight inches in the past 100 years. A 36-inch increase in sea levels would swamp every city on the East Coast of the United States, from Miami to Boston. Worldwide, approximately 100 million people live within three feet of sea level.

Drought, Fire, Floods Climate change is intensifying the circulation of water on, above and below the surface of the Earth — causing drought and floods to be more frequent, severe and widespread. Higher temperatures increase the amount of moisture that evaporates from land and water, leading to drought in many areas. Lands affected by drought are more vulnerable to flooding once rain falls. As temperatures rise globally, droughts will become more frequent and more severe, with potentially devastating consequences for agriculture, water supply and human health. This phenomenon has already been observed in some parts of Asia and Africa, where droughts have become longer and more intense. Hot temperatures and dry conditions also increase the likelihood of forest fires.

- ARKive - Extensive Animal Encyclopedia Wildscreen's Arkive project was launched in 2003 and grew to become the world's biggest encyclopaedia of life on Earth. With the help of over 7,000 of the world’s best wildlife filmmakers and photographers, conservationists and scientists, Arkive.org featured multi-media fact-files for more than 16,000 endangered species. Freely accessible to everyone, over half a million people every month, from over 200 countries, used Arkive to learn and discover the wonders of the natural world. Since 2013 Wildscreen was unable to raise sufficient funds from trusts, foundations, corporates and individual donors to support the year-round costs of keeping Arkive online. Therefore, the charity had been using its reserves to keep the project online and was unable to fund any dedicated staff to maintain Arkive, let alone future-proof it, for over half a decade. Therefore, a very hard decision was made to take the www.arkive.org website offline in February 2019.

Creatures from the Mariana Trench