Can Eating Insects Save the World BBC full Documentary 2013 ( Insect eating animals) HowStuffWorks "Will there be farms in New York City's skyscrapers?" By 2050, it's estimated that 80 percent of the world's people will live in urban areas (currently, 60 percent do). 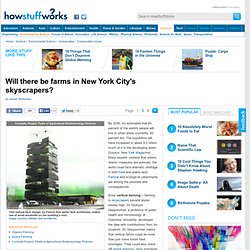 The population will have increased to about 9.2 billion, much of it in the developing world [Source: New York Magazine]. Many experts contend that unless drastic measures are pursued, the world could face dramatic shortage in both food and arable land. Famine and ecological catastrophe are among the possible dire consequences. Enter vertical farming -- farming in skyscrapers several dozen stories high. Dr. The key to vertical farming is space.

By converting from "horizontal farming" to vertical farming, humanity would never have to worry about running out of arable land. These farms would also be located in the urban areas where most of the Earth's population will be living. Because vertical farms would exist in the communities they serve, crop selection could be altered to fit the local community. Kid's Introduction to Hydroponic Gardening. Farm to Table and the Local Food Movement. Food fads are as common as picking the slow line at the grocery store or fights for parking spaces at Whole Foods. 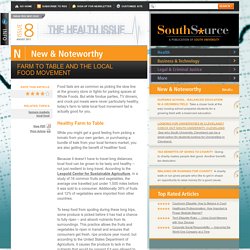 But while fondue parties, TV dinners, and crock pot meals were never particularly healthy, today’s farm to table local food movement fad is actually good for you. Healthy Farm to Table While you might get a good feeling from picking a tomato from your own garden, or purchasing a bundle of kale from your local farmers market, you are also getting the benefit of healthier food.

Organic Food for Kids - Kids' Health Center. Most of us have faced a dilemma like this: You linger in front of the banana display at the grocery store, trying to decide between the bright yellow, perfect-looking conventional bananas and the spotted organic ones that cost more. 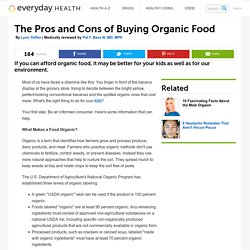 What's the right thing to do for your kids? Your first step: Be an informed consumer. Here's some information that can help. What Makes a Food Organic? Organic is a term that identifies how farmers grow and process produce, dairy products, and meat. The U.S. A green "USDA organic" seal can be used if the product is 100 percent organic. Other tips to remember: Any product with less than 70 percent organic ingredients cannot use the term "organic" in the main label or display area of the product, although they can list organic ingredients in a more detailed information panel.

Is Organic Food More Nutritious for Kids? Organic Farming vs. Conventional Farming - Fresh Connect. The differences between organic and conventional foods stem directly from the farming methods that were used during the food’s production. 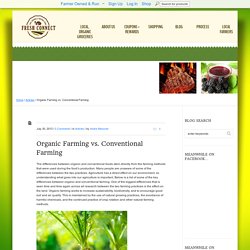 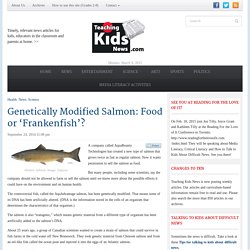 Image: Zapyon A company called AquaBounty Technologies has created a new type of salmon that grows twice as fast as regular salmon. Oilspill_mini-page.pdf. Scientists: Save the Bees, or People Will Go Hungry. Bees pollinate crops. 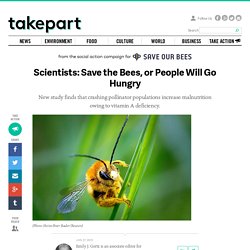 Crops nourish people. Fewer bees (owing to pesticides, loss of habitat, and disease) means less food and more malnutrition. It sounds logical, but there's been no science to back up this accepted wisdom—until now. In a first-of-its-kind study published this month in the journal PLOS One, researchers at two New England universities have connected falling populations of pollinators, such as bees, to shortfalls of vitamin A, a crucial nutrient. The scientists examined what foods people eat in four nations where women and children suffer from high rates of malnutrition: Zambia, Mozambique, Uganda, and Bangladesh.

The researchers then developed two hypothetical case studies to estimate rates of malnourishment: In one, pollinator populations were completely healthy. 5 must-see documentaries about Honey bees. We noticed there was not enough quality Apiculture resource banks on the net. 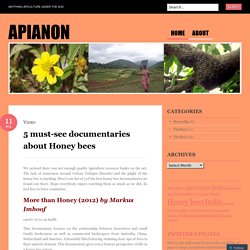 The lack of awareness around Colony Collapse Disorder and the plight of the honey bee is startling. Wild For Bees. GMOs and Your Family. Ecuador Conservation. Share the Buzz. The Mystery of the Disappearing Bees In late 2006, North American beekeepers witnessed a mysterious phenomenon: in certain colonies, adult bees abruptly vanished, leaving the queen and her brood in an otherwise deserted hive. 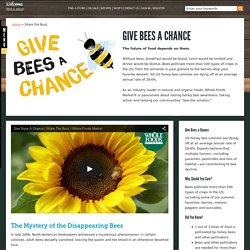 This syndrome, known as “Colony Collapse Disorder,” focused international attention on honey bee populations, which have been declining for decades. Today, scientists and beekeepers theorize that honey bee decline is caused by a combination of factors, including parasites, pesticides and loss of habitat. Where would we be without Bees? The lives of bees and humans are intricately linked. Bees are also vital to the reproduction of clover and alfalfa, which feed cattle and other grazing animals. Hive Mind: Working Together to Give Bees a Chance. Bee Facts For Kids: Bee, Honey Bee, Bee Pictures.